What Makes a Triple Helix Useful in Drug Design?

Triple-helical DNA was first observed in 1957 in the course of an investigation of synthetic polynucleotides, but for decades it remained a laboratory curiosity.

What Makes a Triple Helix Useful in Drug Design?

Triple-helical DNA was first observed in 1957 in the course of an investigation of synthetic polynucleotides, but for decades it remained a laboratory curiosity. Recent studies have shown that synthetic oligonucleotides (usually about 15 nucleotide residues long) bind to specific sequences of naturally occurring double-helical DNA. The oligonucleotides are chemically synthesized to have the correct base sequence for specific binding. The oligonucleotide that forms the third strand fits into the major groove of the double helix and forms specific hydrogen bonds. 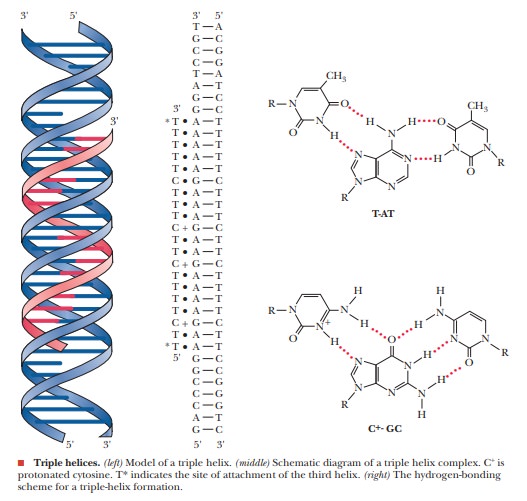 When the third strand is in place, the major groove is inaccessible to proteins that might otherwise bind to that site-specifically, proteins that activate or repress expression of that portion of DNA as a gene. This behavior suggests a possible in vivo role for triple helices, especially in view of the fact that hybrid triplexes with a short RNA strand bound to a DNA double helix are particularly stable.

In another aspect of this work, researchers who have studied triple helices have synthesized oligonucleotides with reactive sites that can be positioned in definite places in DNA sequences. Such a reactive site can be used to modify or cleave DNA at a chosen point in a given sequence. This kind of specific cutting of DNA is crucial to recombinant DNA technology and to genetic engineering.

Biochemistry
Medical - All Subjects
MBBS - All Subjects
Nursing - All Subjects
Pharmacy - All Subjects
MD - All Subjects
MGR University - All Subjects
Biochemistry: Nucleic Acids: How Structure Conveys Information
Levels of Structure in Nucleic Acids
The Covalent Structure of Polynucleotides
The DNA Family Tree
The Structure of DNA
What is the nature of the DNA double helix?
Are there other possible conformations of the double helix?
How does prokaryotic DNA supercoil into its tertiary structure?
How does supercoiling take place in eukaryotic DNA?
What Makes a Triple Helix Useful in Drug Design?
Denaturation of DNA
The Principal Kinds of RNA and Their Structures
What kinds of RNA play a role in life processes?
What is the role of transfer RNA in protein synthesis?
How does ribosomal RNA combine with proteins to form the site of protein synthesis?
The Human Genome Project: Treasure or Pandora’s Box?
Why Identical Twins Are Not Identical