Western blotting is called so because the procedure is similar to Southern blotting, which was developed by Edwin Southern for the detection of DNA. 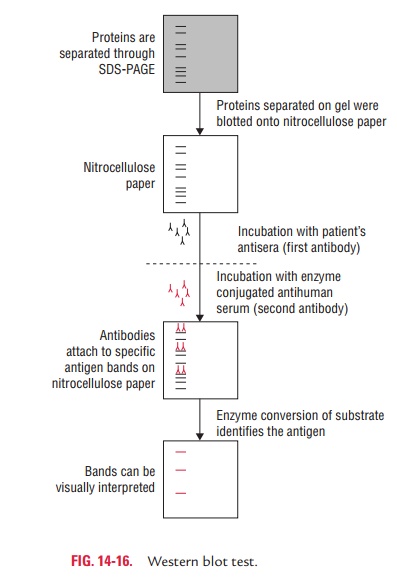 Western blotting is usually done on a tissue homogenate or extract. It uses SDS-PAGE (sodium dodecyl sulphate-polyacrylamide gel electrophoresis), a type of gel electro-phoresis to first separate various proteins in a mixture on the basis of their shape and size. The protein bands thus obtained are transferred onto a nitrocellulose or nylon membrane where they are “probed” with antibodies specific to the protein to be detected. The antigen–antibody com-plexes that form on the band containing the protein recog-nized by the antibody can be visualized in a variety of ways. If the protein of interest was bound by a radioactive anti-body, its position on the blot can be determined by exposing the membrane to a sheet of X-ray film, a procedure called autoradiography. However, the most generally used detec-tion procedures employ enzyme-linked antibodies against the protein. After binding of the enzyme–antibody conju-gate, addition of a chromogenic substrate that produces a highly colored and insoluble product causes the appear-ance of a colored band at the site of the target antigen. The site of the protein of interest can be determined with much higher sensitivity if a chemiluminescent compound along with suitable enhancing agents is used to produce light at the antigen site (Fig. 14-16).