Precipitation reactions can be broadly of three types:

3.        Precipitation in agar with an electric field

Ring test and flocculation test are examples of precipitation in solution.

Ring test: In this test, antigen solution is layered overantiserum in a test tube. Precipitation between antigen and antibodies in antiserum solution is marked by the appear-ance of a ring of precipitation at the junction of two liquid layers. C-reactive protein (CRP) and streptococcal grouping by the Lancefield methods are the examples of the ring test.

The precipitation test in agar gel is termed as immunodiffusion test. In this test, reactants are added to the gel and antigen– antibody combination occurs by means of diffusion. The rate of diffusion is affected by the size of the particles, temperature, gel viscosity, amount of hydration, and interactions between the matrix and reactants.

An agar concentration of 0.3–1.5% allows for diffusion of most reactants. Agarose is often preferred to agar because agar has a strong negative charge, while agarose has almost none, so that interactions between the gel and reactants are minimized.

Single diffusion in one dimension:Single diffusion in onedimension, as the name suggests, is the single diffusion of antigen in agar in one dimension. It is otherwise called Oudinprocedure because this technique was pioneered by Oudinwho for the first time used gels for precipitation reactions. In this method, antibody is incorporated into agar gel in a test tube and the antigen solution is poured over it. During the course of time, the antigen diffuses downward toward the antibody in agar gel and a line of precipitation is formed. The number of precipitate bands shows the number of dif-ferent antigens present in the antigen solution.

The antigen is then applied to a well cut into the gel. When antibody already present in the gel reacts with the antigen, which diffuses out of the well, a ring of pre-cipitation is formed around the wells. The diameter of the ring is directly proportional to th=e concentration of antigen. The greater the amount of antigen in the well, the farther the ring will be from the well (Fig. 14-3, Color Photo 6). 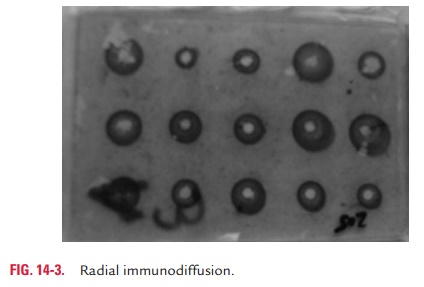 However, the test has recently been replaced by more sensitive and automated methods, such as nephelometry and enzyme-linked immunosorbent assays (ELISAs).

Double diffusion in one dimension:This method is also called Oakley–Fulthrope procedure. In this method, the antibody isincorporated in agar gel in a test tube, above which a layer of plain agar is placed. The antigen is then layered on top of this plain agar. During the course of time, the antigen and antibody move toward each other through the intervening layer of plain agar. In this zone of plain agar, both antigen and antibody react with each other to form a band of pre-cipitation at their optimum concentration.

Double diffusion in two dimensions:This method is alsocalled the Ouchterlony procedure. In this method, both the antigen and antibody diffuse independently through agar gel in two dimensions, horizontally and vertically. The test is performed by cutting wells in the agar gel poured on a glass slide or in a Petri dish. The antiserum consisting of anti-bodies is placed in the central well, and different antigens are added to the wells surrounding the center well. After an incubation period of 12–48 hours in a moist chamber, the lines of precipitins are formed at the sites of combination of antigens and antibodies (Color Photo 7). Three types of reactions can be demonstrated as follows (Fig. 14.4):

1. Line of precipitation at their junction forming an arc represents serologic identity or the presence of a common epitope in antigens.

2. A pattern of crossed lines demonstrates two separate reactions and indicates that the compared antigens are unrelated and share no common epitopes.

3.Fusion of two lines with a spur indicates cross-reaction or partial identity. In this last case, the two antigens share a common epitope, but some antibody molecules are not captured by the antigen and traverse through the initial precipitin line to combine with additional epitopes found in the more complex antigen.

Precipitation in agar with an electric field

Immunoelectrophoresis: Immunoelectrophoresis is a processof combination of immunodiffusion and electrophoresis. It is a method in which different antigens in serum are separated according to their charge under an electric field. In this method, a drop of antigen is placed into a well in agar on a glass slide. An electric current is then passed through the agar. During electrophoresis, antigens move in the electric field according to their charge and size. Following electrophoresis, a trough is cut into the agar and is filled with the antibody and diffusion is allowed to occur. As the antigen and antibody diffuse toward each other, they form a series of lines of precipitation (Fig. 14-5). The main advantage of immunoelectrophoresis is that a number of antigens can be identified in serum. The method is used to detect normal as well as abnormal proteins, such as myeloma proteins in human serum.

Counter-current immunoelectrophoresis: Counter-current immu-noelectrophoresis depends on movement of antigen towards the anode and of antibody towards the cathode through the agar under electric field. The test is performed on a glass slide with agarose in which a pair of wells is punched out. One well is filled with antigen and the other with antibody. Electric current is then passed through the gel. The migration of antigen and antibody is greatly facilitated under electric field, and the line of precipitation is made visible in 30–60 minutes (Fig. 14-6). 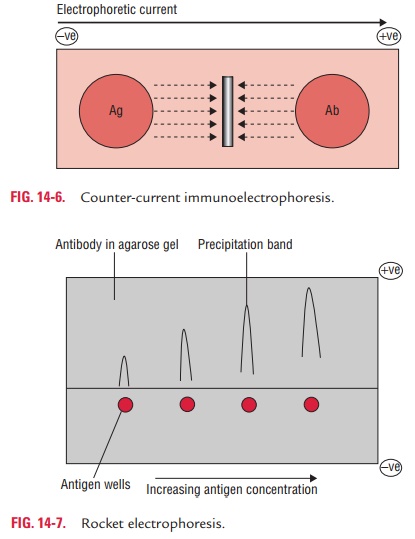 Rocket electrophoresis: This technique is an adaptationof radial immunodiffusion developed by Laurell. It is called so due to the appearance of the precipitin bands in the shape of cone-like structures (rocket appearance) at the end of the reaction (Fig. 14-7, Color Photo 8). In this method, antibody is incorporated in the gel and antigen is placed in wells cut in the gel.

Electric current is then passed through the gel, which facilitates the migration of antigen into the agar. This results in formation of a precipitin line that is conical in shape, resembling a rocket. The height of the rocket, measured from the well to the apex, is directly in proportion to the amount of antigen in the sample (Fig. 14-8). Rocket electrophoresis is used mainly for quantitative estimation of antigen in the serum. 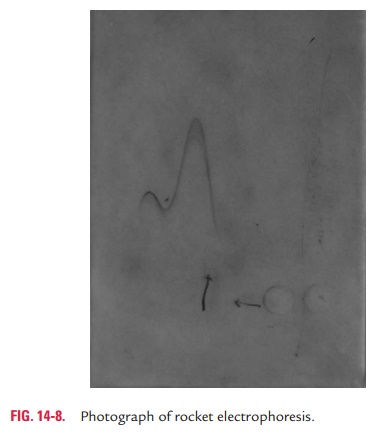 In this test, first, a small trough is cut in agar gel on a glass plate and is filled with the antigen solution. Electric current is then passed through the gel, and the antigens migrate into the gel at a rate proportional to their net electric charge. In the sec-ond stage, after electrophoresis, the gel piece containing the separated antigens is placed on a second glass plate and the agar containing antibody is poured around the gel piece. A second electric potential is applied at right angles to the first direction of migration. The preseparated antigens then migrate into the gel containing antibodies at a rate proportional to their net charge and precipitate with antibodies in the gel, forming precipitates.

Turbidimetry and nephelometry: Turbidimetry and nephelo-metry are the two methods used to detect and quantitate precipitation reactions in serum and are based on the phenomenon of light scattering by precipitates in a solution. Turbidimetry is a measurement of turbidity or cloudiness ofprecipitate in a solution. In this method, a detection device is placed in direct line with the incident light that collects the light after it has passed through the solution. It thus measures the reduction in the intensity of light due to reflection, absorption, or scatter. Scattering of light occurs in proportion to the size, shape, and concentration of precipitates present in solution.

Nephelometry is an improvement on this technique in thatit measures the light that is scattered at a particular angle from the incident beam as it passes through a suspension containing the antigen–antibody precipitate. The amount of light scattered is an index of the concentration of the solution. Beginning with a constant amount of antibody, an increasing amount of anti-gen would result in an increase in antigen–antibody complexes. Thus the relationship between antigen concentrations, as indi-cated by the antigen–antibody complex formation, and light scattering approaches linearity. By using a computer, the exact values of the antigen or antibody in the serum can be estimated through this system. To improve the sensitivity of this system, laser beams have been used as the source of incident light.