The complement system is a group of serum proteins that is present in normal serum. The system consists of 20 or more serum proteins that interact with one another and with cell membrane. It is a biochemical cascade that helps to clear patho-gens from the body. It aids the antibodies in lysing bacteria, promoting phagocytosis, and in immune adherence. The com-plement-dependent serological tests may be of the following types:

Indicator system: It consists of RBCs that have been preincu-bated with a specific anti-RBC antibody, in concentrations that do not cause agglutination, and no hemolysis of RBCs occurs in the absence of complement. Such RBCs are designated as “sensitized” red cells.

Test system: In the test system, patient’s serum is first heatedto 56°C to inactivate the native complement. Then the inac-tivated serum is adsorbed with washed sheep RBC to elimi-nate broadly cross-reactive anti-RBC antibodies (also known as Forssman-type antibodies), which could interfere with the assay. The serum is then mixed with purified antigen and with a dilution of fresh guinea pig serum, used as source of complement. The mixture is incubated for 30 minutes at 37°C to allow antibody in the patient’s serum to form complexes with the antigen and to fix complement (Fig. 14-12). 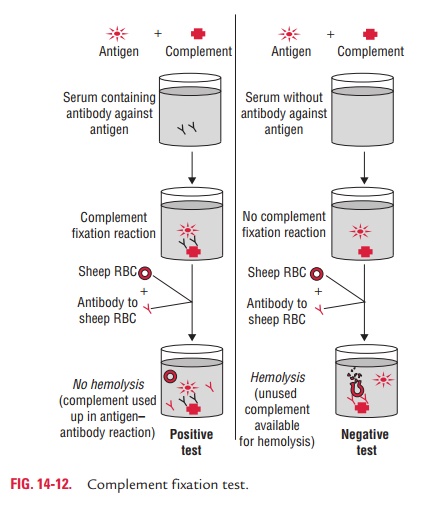 In complement fixation test, “sensitized” red cells are then added to the mixture. If the red cells are lysed, it indicates that there were no antibodies specific to the antigen in the serum of the patient. The complement therefore was not consumed in the test system and was available to be used by the anti-RBC antibodies, resulting in hemolysis. This reaction is considered negative. The test is considered positive if the red cells are not lysed. Nonlysis of the cells indicates that patient’s serum had antibodies specific to the antigen, which have “fixed” comple-ment. Hence, no complement was available to be activated by the indicator system.

Indirect complement fixation test: Indirect complementfixation test is carried out to test the sera that cannot fix guinea pig complement. These include avian sera (e.g., parrot, duck) and mammalian sera (e.g., cat, horse). The test is carried out in duplicate and after the first test, the standard antiserum known to fix the complement is added to one set. Hemolysis indicates a positive test. In a positive test, if the serum contains antibody, the antigen would have been used up in the first test, standard antiserum added subsequently would fail to fix the complement, therefore causing hemolysis.

Conglutinating complement adsorption test: It is an alter-native method for systems that do not fix guinea pig com-plement. Sheep erythrocytes sensitized with bovine serum are used as the indicator system. The bovine serum con-tains conglutinin, a b globulin that acts as antibody to the complement. Therefore, conglutinin causes agglutination of sensitized sheep erythrocytes if these are combined with complement, which is known as conglutination. If the horse complement had been used up by the antigen–antibody reac-tion in the first step, the agglutination of the sensitized cells does not occur.

Immune adherence test is a test in which certain pathogens (e.g., Vibrio cholerae, Treponema pallidum, etc.) react with specific antibodies in the presence of complement and adhere to eryth-rocytes or platelets. The adherence of cells to bacteria is known as immune adherence, which facilitates phagocytosis of the bacteria.

When a live bacterium, such as V. cholerae, is mixed with its specific antibody in the presence of complement, the bacterium is killed and lysed. This forms the basis of test used to measure anti-cholera antibodies in the serum.