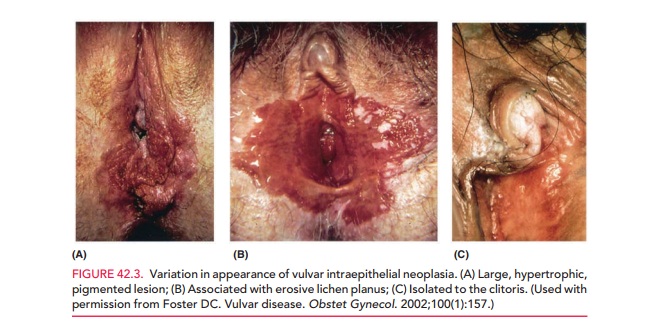 Much like the vulvar dermatoses, the classification and ter-minology of VIN is still evolving and has undergone multi-ple revisions and reclassifications over the years.

Much like the vulvar dermatoses, the classification and ter-minology of VIN is still evolving and has undergone multi-ple revisions and reclassifications over the years. There are currently three grading systems: (1) the World Health Organization (WHO) three-grade system of VIN 1, 2, and 3; (2) the clinical, Bethesda-like, two-grade system of low- and high-grade vulvar intraepithelial lesions; and the revised 2004 International Society for the Study of Vulvar Disease (ISSVD) classification, which divides VIN into two types: usual and differentiated. VIN, usual type is further divided into 3 subtypes: warty, basaloid, and mixed. These grading systems are summarized in Table 42.3.

VIN 1, or mild dysplasia, is a low-grade lesion that demon-strates minimal to mild squamous atypia limited to the lower epidermis. VIN 1 is either a non-neoplastic, reactive atypia or is an effect of a human papillomavirus (HPV) infection.

VIN 1 occurs most often in condylomata acumi-nata. Lesions that are condylomatous in origin do not have the features of attenuated maturation, pleomorphism, and atypical mitotic figures that are other forms of VIN.

Because the features of VIN 1 are an uncommon his-tologic finding and there is little evidence that VIN 1 is a cancer precursor, it may be misleading to classify these lesions as true intraepithelial neoplasia. In 2004, the ISSVD abolished the term VIN 1 from their classification system. The diagnosis of VIN 1 must be made by biopsy, and treatment is the same as for condyloma.

The ISSVD combined VIN 2 and 3 into VIN, usual type. These are high-grade, HPV-related lesions distinguished only by degree of abnormality. They represent true neo-plasia with a high predilection for progression to severe intraepithelial lesions and, eventually, carcinoma, if left untreated.

Smoking or secondhand smoke is a common social-history finding in patients with VIN. Presenting complaintsinclude vulvar pruritus, chronic irritation, and a development of raised mass lesions. Normally, the lesions are localized, fairlywell-isolated, and raised above the normal epithelial sur-face to include a slightly rough texture. They are usually found along the posterior, hairless area of vulva and in the perineal body, but can occur anywhere on the vulva. The color changes in these lesions range from white, hyperplas-tic areas to reddened or dusky, patch-like involvement, depending on whether associated hyperkeratosis is present. Figure 42.3 illustrates the variation in appearance of VIN.

In patients without obvious raised or isolated lesions, careful inspection of the vulva is warranted, using a colpo-scope. Applying a 3%- to 5%-solution of acetic acid to the vulva for 2 to 5 minutes often accentuates the white lesions and may also help in revealing abnormal vascular patterns. These areas must be selectively biopsied in multiple sites to thor-oughly investigate the type of VIN and reliably exclude invasive carcinoma.

VIN, usual type is subdivided into three histologic subtypes–warty, basaloid, or mixed–depending on the fea-tures present. They all have atypical mitotic figures and nuclear pleomorphism, with loss of normal differentiation in the lower one third to one half of the epithelial layer. Full-thickness loss of maturation indicates lesions that are at least severely dysplastic, including areas that may rep-resent true carcinoma in situ (CIS).

The goal in treating VIN, usual type is to quickly and com-pletely remove all involved areas of skin. These lesions can beremoved after appropriate biopsies confirm the absence of invasive cancer. Removal options include wide local exci-sion or laser ablation. A variety of nonsurgical treatments for patients with VIN, usual type have been reported, including corticosteroids, 5-fluorouracil, and imidazo-quinolones (particularly imiquimod). Results to date are inconclusive. Careful evaluation to exclude invasive disease isof paramount importance, as VIN, usual type is seen adjacent to 30% of SCCs of the vulva.

The less common simplex type of VIN (CIS) in the WHO system is now called VIN, differentiated type by the ISSVD (see Table 42.3). The lesion is either a hyper-keratotic plaque, warty papule, or an ulcer, seen primarily in older women. It is often associated with keratinizing SCCs or lichen sclerosus, and is not HPV-related. It is thought that VIN, differentiated type is underdiagnosed due to a relatively short intraepithelial phase before pro-gression to invasive carcinoma. Clinical awareness of this entity and its features as different from VIN, usual type would help to improve diagnosis before cancer has super-vened. Biopsy is mandatory and the mainstay of treat-ment is excision.