Vulvar carcinoma accounts for approximately 5% of all gyne-cologic malignancies.

The typical clinical profile of vulvar carcinoma includes women in their postmenopausal years, most commonly between the ages of 70 and 80. However, about 20% of these cancers are discovered in women younger than 50 years of age. Vulvar pruritus is the most common presenting complaint. In addition, patients may notice a red or white ulcerative or exophytic lesion arising most commonly on the posterior two-thirds of either labium majus. An exophytic ulcerative lesion need not be present, further underscoring the need for thorough biopsy in patients of the age group who com-plain of vulvar symptoms. Patients in this older age group maybe reluctant to consult their physicians about these signs and symp-toms, and physicians are further reluctant to investigate the symp-toms and findings thoroughly via vulvar biopsy, which can result in a delay in treatment.

Although a specific cause for vulvar cancer is not known, progression has been shown from prior intraepithe-lial lesions, including those that are associated with certain types of HPV. Smokers have a high preponderance in this population of patients.

Squamous cell carcinoma of the vulva generally remains localized for long periods of time and then spreads in a pre-dictable fashion to the regional lymph nodes, including those of the inguinal and femoral chain. Lesions 2 cm wide and 0.5 cm deep have an increased chance of nodal metas-tases. The overall incidence of lymph node metastasis is approximately 30%. Lesions arising in the anterior one-third of the vulva may spread to the deep pelvic nodes, bypassing regional inguinal and femoral lymphatics.

The staging classification for vulvar cancer was revised by the Federation of Gynecology and Obstetrics (FIGO) in 1995 (Table 42.4). Prior to 1988, vulvar cancers were staged clinically. However, noted discrepancies in regard to pre-dicting nodal metastasis led to a change from clinical to surgical staging. This staging convention uses the analysis of the removed vulvar tumor and microscopic assessment of the regional lymph nodes as its basis.

Although the mainstay for the treatment of invasive vul-var cancer is surgical, many advances have been made to help individualize patients into treatment categories in an effort to reduce the amount of radical surgery, while not compromising survival. Accordingly, not all patients undergo radical vulvectomy with bilateral nodal dissec-tions. Individualized approaches include the following:

Other Types of Vulvar Cancer

Melanoma is the most common nonsquamous cell cancer of thevulva. Vulvar melanoma usually presents with a raised, irri-tated, pruritic, pigmented lesion. Most commonly, mela-notic lesions are located on the labia minora or the clitoris. Melanoma accounts for approximately 6% of all vulvar malignancies, and when suspected, wide local excision is necessary for diagnosis and staging. Survival approaches 100% when the lesions are confined to the intrapapillary ridges, decreasing rapidly as involvement includes the pap-illary dermis, reticular dermis, and finally subcutaneous tissues. In the latter instance, survival is generally 20% because of substantial incidence of nodal involvement. Because early diagnosis and treatment by wide excision are so crucial, it is important to recognize that irritated, pig-mented, vulvar lesions mandate excisional biopsy for defin-itive treatment.

CARCINOMA OF THE BARTHOLIN GLAND

Carcinoma of the Bartholin gland is uncommon (1% to2% of all vulvar carcinomas). Malignancies that arise from the Bartholin gland include adenocarcinomas, squamous cell carcinomas, adenosquamous carcinomas, and adenoid cystic and transitional-cell carcinomas. These arise mainly as a result of changes occurring within the different histo-logic areas of the gland and ducts leading from it. Bartholin carcinoma on average occurs in women over the age of 50; however, any new Bartholin mass in a woman over the age of 40 should be excised. Treatment of diagnosed Bartholin cancers is radical vulvectomy and bilateral lymphadenec-tomy. Recurrence is disappointingly common, and a 5-year overall survival rate of 65% is noted. 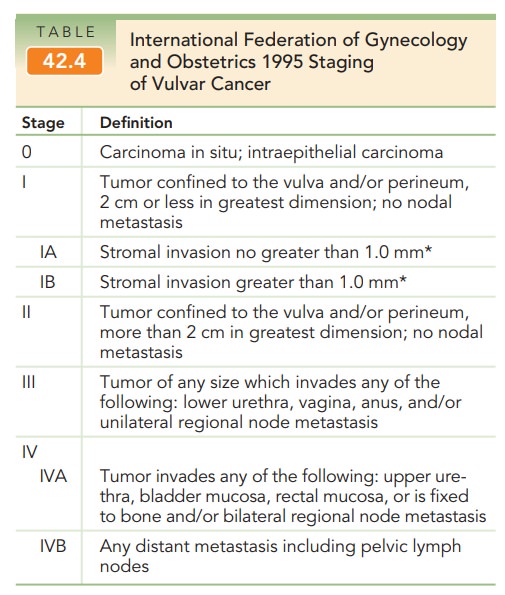