Lichen sclerosus has confused clinicians and pathologistsbecause of inconsistent terminology and its frequent asso-ciation with other types of vulvar pathology, including those of the acanthotic variety.

Lichen sclerosus has confused clinicians and pathologistsbecause of inconsistent terminology and its frequent asso-ciation with other types of vulvar pathology, including those of the acanthotic variety. As with the other disorders, chronic vulvar pruritus occurs in most patients. Typically,the vulva is diffusely involved, with very thin, whitish epithe-lial areas, termed “onion skin” epithelium (Fig. 42.1B). Theepithelium has been termed “cigarette paper” skin and described as “parchment-like.” Most patients have involve-ment on both sides of the vulva, with the most common sites being the labia majora, labia minora, the clitoral and periclitoral epithelium, and the perineal body. The lesion may extend to include a perianal “halo” of atrophic, whitish epithelium, forming a figure-8 configuration with the vul-var changes. In severe cases, many normal anatomic landmarksare lost, including obliteration of the labial and periclitoral archi-tecture as well as severe stenosis of the vaginal introitus. Somepatients have areas of cracked skin, which are prone to bleeding with minimal trauma. Patients with these severe anatomic changes complain of difficulty in having normal coital function. 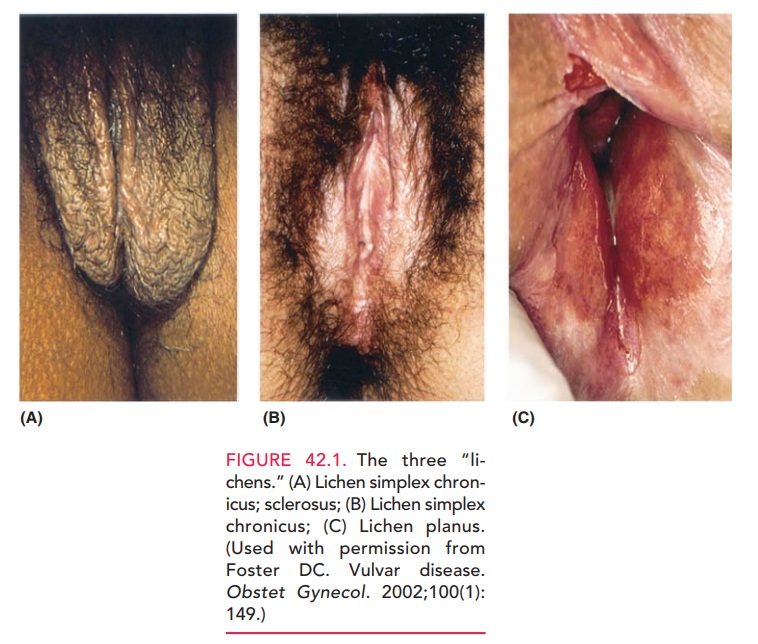 The etiology of lichen sclerosus is unknown, but a familial association has been noted, as well as disorders of the immune system, including thyroid disorders and Class II human leukocyte antigens.

However, the response to topical steroids furtherindicates the underlying inflammatory process and the role of prostaglandins and leukotrienes in the hallmark symptom of pruritus. Histologic evaluation and confirmation of lichen scle-rosis is often necessary and useful, because they allow specific ther-apy. The histologic features of the lichenoid pattern includea band of chronic inflammatory cells, consisting mostly of lymphocytes, in the upper dermis with a zone of homoge-neous, pink-staining, collagenous-like material beneath the epidermis due to cell death. The obliteration of boundaries between collagen bundles gives the dermis a “hyalinized” or “glassy” appearance. This dermal homogenization/ sclerosis pattern is virtually pathognomonic.

In 27% to 35% of patients, there are associated areas of acanthosis characterized by hyperkeratosis—an increase in the number of epithelial cells (keratinocytes) with flat-tening of the rete pegs. These areas may be mixed through- out or adjacent to the typically lichenoid areas.

In patients with this mixed pattern, both components need to be treated to effect resolution of symptoms. Patients in whom a large acanthotic component has been histologically confirmed should be treated initially with well-penetrating cortico-steroid creams. With improvement of these areas (usually 2 to 3 weeks), therapy can then be directed to the lichenoid component.

Treatment for lichen sclerosis includes the use of topical steroid (clobetasol) preparations in an effort to ameliorate symp-toms. The lesion is unlikely to resolve totally. Intermittenttreatment may be needed indefinitely, which is in marked contrast to acanthotic lesions, which usually totally resolve within 6 months.

Lichen sclerosus does not significantly increase the patient’s risk of developing cancer.

It has been estimated that this risk is in the 4% range. However, due to the frequent coexistence with acanthosis, the condition needs to be followed carefully and a rebiopsy performed, because therapeutically resistant acanthosis can be a harbinger of squamous cell carcinoma (SCC).