Vaginal disease can be classified into three broad categories: benign, precancerous, and cancerous. There are impor-tant differences in the management and prognosis of these conditions.

Vaginal disease can be classified into three broad categories: benign, precancerous, and cancerous. There are impor-tant differences in the management and prognosis of these conditions.

Vaginal neoplasias are rare and usually occur secondary to cervical or vulvar cancers that have spread to the vagina from the primary site.

Gartner duct cysts arise from vestigial remnants of thewolffian or mesonephric system that course along the outer anterior aspect of the vaginal canal. These cystic structures are usually small and asymptomatic, but on occasion they may be larger and symptomatic so that excision is required.

Inclusion cysts are usually seen on the posterior lowervaginal surface, resulting from imperfect approximation of childbirth lacerations or episiotomy. They are lined with stratified squamous epithelium, their content is usually cheesy, and they may be excised if symptomatic.

Vaginal intraepithelial neoplasia (VAIN) can be classi-fied into three types:

VAIN is most commonly located in the upper third of the vagina, a finding that may be partially related to its association with the more common cervical neoplasias. It is estimated that one-half to two-thirds of all patients with VAIN have had cervical or vulvar neoplasia.

Patients with VAIN I and II can be monitored and typically will not require therapy. Many of these patients have human papillomavirus infection and atrophic change of the vagina. Topical estrogen therapy may be useful in some women.

VAIN III appears to occur more commonly in thethird decade of life onward, although its exact incidence is unknown. One-half to two-thirds of patients with VAIN have a previous or coexistent neoplasm of the lower genital tract. Approximately 1% to 2% of patients who undergo hysterectomy for CIN III and many patients who undergo radiation therapy for other gynecologic malig-nancy ultimately develop VAIN III. This is one of the arguments for yearly Pap smears after hysterectomy. The importance of VAIN III is its potential for progression to invasive vaginal carcinoma, as the lesions themselves are usually asymptomatic and have no intrinsic morbidity.

VAIN III must be differentiated from other causes of red, ulcerated, or white hyperplastic lesions of the vagina such as herpes, traumatic lesions, hyperkeratosis associated with chronic irritation (e.g., from a poorly fit-ting diaphragm), or adenosis. Inspection and palpation of the vagina are the mainstays of diagnosis, but, unfortu-nately, this is often done in a cursory fashion during the routine pelvic examination. Pap smears of the vaginal epithe-lium can disclose findings that are useful in the diagnosis, although colposcopy with directed biopsy is the definitive method of diagnosis, just as it is with CIN.

The goals of treatment of VAIN III are ablation of the intraepithelial lesion while preserving vaginal depth, cal-iber, and sexual function. Laser ablation, local excision, and chemical treatment with 5-fluorouracil cream are all used for limited lesions; total or partial vaginectomy with appli-cation of a split thickness skin graft is usually reserved for failure of the previously described treatments. Cure rates of 80% to 95% may be expected.

Invasive vaginal cancer accounts for approximately 1% to 3% of gynecologic malignancies. Squamous cell carcinoma makes up approximately 80% to 90% of these malignancies, which occur primarily in women 55 years of age or older. The remainder of vaginal carcinomas consists of adenocarcinoma of the vagina and vaginal melanoma.

The staging of vaginal carcinoma is nonsurgical (Table 42.5). Radiation therapy is the mainstay of treatment for SCC of the vagina. Radical hysterectomy combined with upper vaginectomy and pelvic lymphadenectomy are used for selected patients. 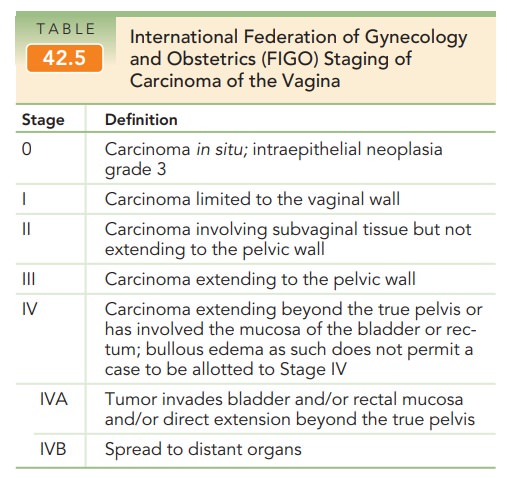 Upper vaginal lesions and pelvic exenteration and radical vulvectomy are used for selected patients with lower vaginal lesions involving the vulva. Most young women with clear cell carcinoma have lesions located in the upper one-half of the vagina, and wish to maintain ovarian and vaginal function. Radical hysterectomy with upper vaginectomy combined with pelvic lymphadenec-tomy is often the primary treatment for these patients, with radiation therapy following. The overall 5-year survival rate for squamous cell carcinoma of the vagina is approximately 42%, and for clear cell adenocarcinoma of the vagina, 78%, with stage I and II patients having the best prognosis. Melanoma is treated with radical surgery; radiation and chemotherapy have little efficacy.

Sarcoma botryoides (or embryonal rhabdomyo-sarcoma) is a rare tumor that presents as a mass of grape-like polyps protruding from the introitus of pediatric-age patients. It arises from the undifferentiated mesenchyme of the lamina propria of the anterior vaginal wall. Bloody discharge is an associated symptom in these tumors. The tumor spreads locally, although it may have distant hema-togenous metastases. Combination chemotherapy appears to be effective, resulting in a marked reduction in tumor size. This permits more conservative surgery than was performed in the past, preserving as much bowel and bladder function as possible.