Voltage to current converter in which load resistor RL is floating (not connected to ground).

Voltage to current converter in which load resistor RL is floating (not connected to ground). Vin is applied to the non- inverting input terminal, and the feedback voltage across R1 devices the inverting input terminal. This circuit is also called as a current – series negative feedback amplifier. Because the feedback voltage across R1 (applied Non-inverting terminal) depends on the output current i0 and is in series with the input difference voltage Vid. 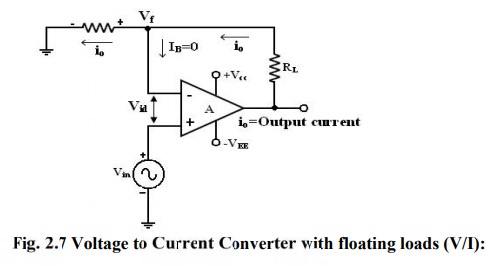 Writing KVL for the input loop,

From the fig input voltage Vin is converted into output current of Vin/RL [Vin -> i0]. In other words, input volt appears across R1. If RL is a precision resistor, the output current

This is the other type V – I converter, in which one terminal of the load is connected  to ground. 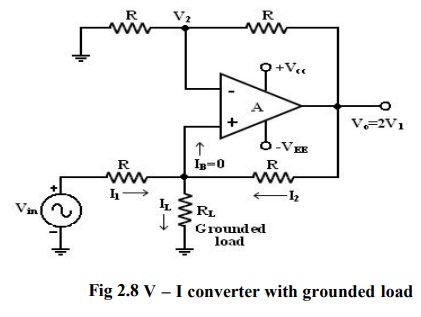 Analysis of the circuit:

The analysis of the circuit can be done by following 2 steps.

1. To determine the voltage V1 at the non-inverting (+) terminals and

2. To establish relationship between V1 and the load current IL. Applying KCL at node a,

Current to Voltage Converter (I –V):

Open – loop gain A of the op-amp is very large. Input impedance of the op amp is very high.

Sensitivity of the I – V converter:

2.        Hence the gain of this converter is equal to -RF. The magnitude of the gain (i.e.) is called as sensitivity of I to V converter.

3.        The amount of change in output volt ∆V0 for a given change in the input current ∆Iin is decide by the sensitivity of I-V converter.

4.        By keeping RF variable, it is possible to vary the sensitivity as per the requirements.

In some applications, it is necessary to have matched diodes with equal voltage drops at a particular value of diode current. The circuit can be used in finding matched diodes and is obtained from fig (V-I converter with floating load) by replacing RL with a diode.

When the switch is in position 1: (Diode Match Finder) Rectifier diode (IN 4001) is placed in the f/b loop, the current through this loop is set by input voltage Vin and Resistor R1. For Vin = 1V and R1 = 100Ω, the current through this I0 = Vin/R1 = 1/100 = 10mA. As long as V0 and R1 constant, I0 will be constant. The Voltage drop across the diode can be found either by measuring the volt across it or o/p voltage. 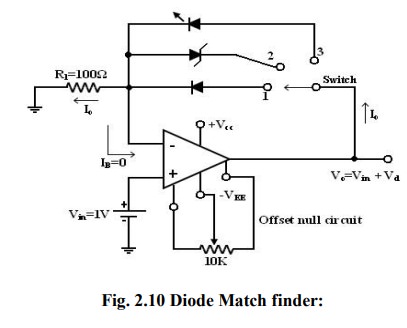 To avoid an error in output voltage the op-amp should be initially nulled. Thus the matched diodes can be found by connecting diodes one after another in the feedback path and measuring voltage across them.

(When the switch position 2) when the switch is in position 2, the circuit becomes a Zener diode tester. The circuit can be used to find the breakdown voltage of Zener diodes. The Zener current is set at a constant value by Vin and R1. If this current is larger than the knee current (IZK ) of the Zener, the Zener blocks (Vz ) volts. For Ex: IZK = 1mA , VZ = 6.2V, Vin = 1V, R1 = 100Ω Since the current through the Zener is , I0 = Vin/R1 = 1/100 =10mA > IZK the voltage across the Zener will be approximately equal to 6.2V.

The circuit becomes a LED when the switch is in position 3. LED current is set at a constant value by Vin and R1. LEDs can be tested for brightness one after another at this current.

Matched LEDs with equal brightness at a specific value of current are useful as indicates and display devices in digital applications.

Applications of I – V Converter:

Photoconductive devices produce a current that is proportional to an incident energy or light (i.e).

It can be used to detect the light. 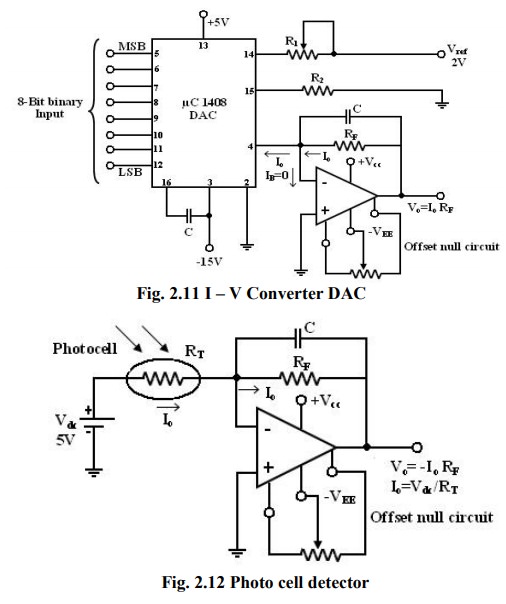 Photocells, photodiodes, photovoltaic cells give an output current that depends on the intensity of light and independent of the load. The current through these devices can be converted to voltage by I – V converter and it can be used as a measure of the amount of light. In this fig photocell is connected to the I – V Converter. Photocell is a passive transducer it requires an external dc voltage (Vdc). The dc voltage can be eliminated if a photovoltaic cell is used instead of a photocell. The Photovoltaic Cell is a semiconductor device that converts the radiant energy to electrical power. It is a self- generating circuit because it does not require dc voltage externally. Ex of Photovoltaic Cell: used in space applications and watches.