Wave shaping circuits are commonly used in digital computers and communication such as TV and FM receiver.

Wave shaping circuits are commonly used in digital computers and communication such as TV and FM receiver.

In op-amp clipper circuits a rectifier diode may be used to clip off a certain portion of the input signal to obtain a desired o/p waveform.

The diode works as an ideal diode (switch) because when on, the voltage drop across the diode is divided by the open loop gain of the op-amp. When off (reverse biased) the diode is an open circuit. In an op-amp clamper circuits, however a predetermined dc level is deliberately inserted in the o/p volt. For this reason, the clamper is sometimes called a dc inverter.

A circuit that removes positive parts of the input signal can be formed by using an op-amp with a rectifier diode. T he clipping level is determined by the reference voltage Vref, which should less than the i/p range of the op-amp (Vref < Vin). The Output voltage has the portions of the positive half cycles above Vref clipped off.

The circuit works as follows:

During the positive half cycle of the input, the diode D1 conducts only until Vin = Vref. This happens because when Vin <Vref, the output volts V0 of the op-amp becomes negative to device D1 into conduction when D1 conducts it closes feedback loop and op-amp operates as a voltage follower. (i.e.) Output V0 follows input until Vin = Vref.

When Vin > Vref => the V0 becomes +ve to derive D1 into off. It opens the feedback loop and op- amp operates open loop. When Vin drops below Vref (Vin<Vref) the o/p of the op-amp V0 again becomes –ve to device D1 into conduction. It closes the feedback path. (o/p follows the i/p).

The op-amp alternates between open loop (off) and closed loop operation as the D1 is turned off and on respectively. For this reason the op-amp used must be high speed and preferably compensated for unity gain. 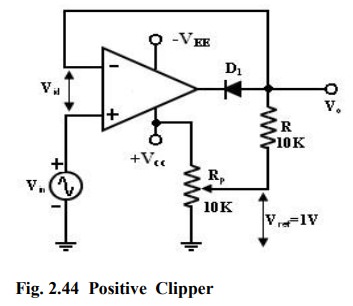 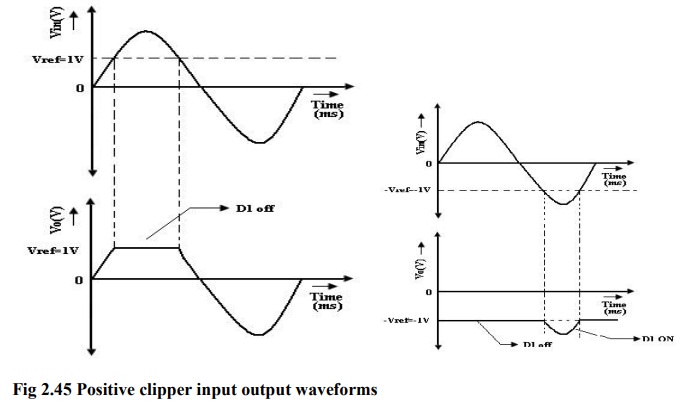 Ex: for high speed op-amp HA 2500, LM310, μA 318. In addition the difference input voltage (Vid=high) is high during the time when the feedback loop is open (D1 is off) hence an op-amp with a high difference input voltage is necessary to prevent input breakdown. If Rp (pot) is connected to –VEE instead of +Vcc, the ref voltage Vref will be negative (Vref = -ve). This will cause the entire o/p waveform above –Vref to be clipped off. 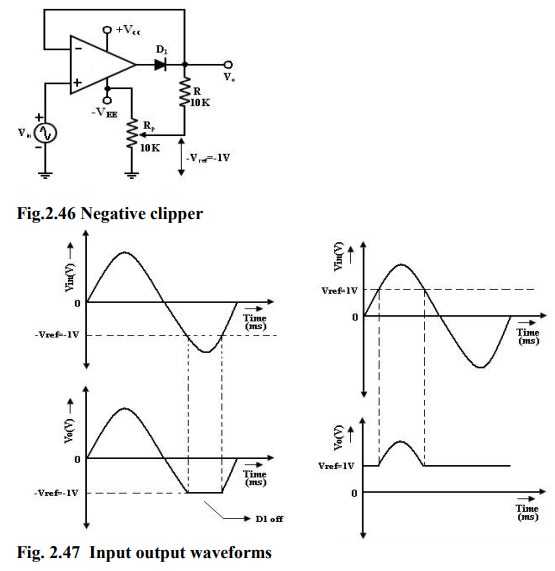 The positive clipper is converted into a –ve clipper by simply reversing diode D1 and changing the polarity of Vref voltage. The negative clipper clips off the –ve parts of the input signal below the reference voltage. Diode D1 conducts -> when Vin > -Vref and therefore during this period o/p volt V0 follows the i/p volt Vin. The –Ve portion of the output volt below –Vref is clipped off because (D1 is off) Vin<-Vref. If –Vref is changed to –Vref by connecting the potentiometer Rp to the +Vcc, the V0 below +Vref will be clipped off. The diode D1 must be on for Vin > Vref and off for Vin.

In clamper circuits a predetermined dc level is added to the output voltage. (or) The output is clamped to a desired dc level.

1.     If the clamped dc level is +ve, the clamper is positive clamper

2.     If the clamped dc level is –ve, the clamper is negative clamper.

Other equivalent terms used for clamper are dc inserter or restorer. Inverting and Non-Inverting that uses this technique. 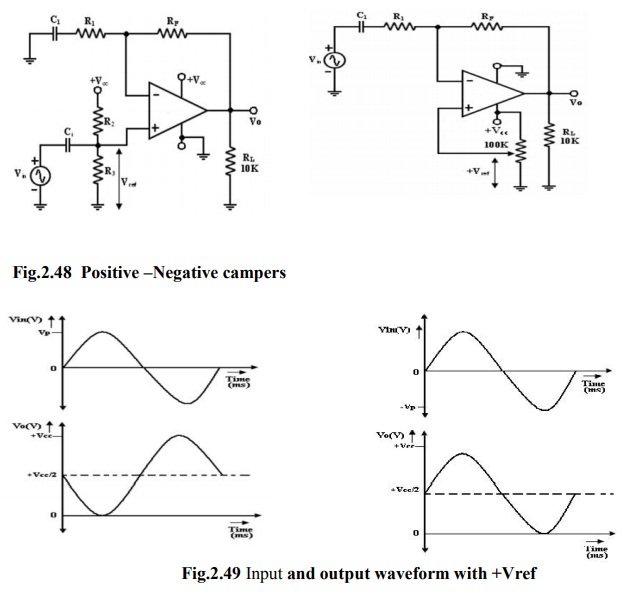 The Value of the capacitors in these circuits depends on different input rates and pulse widths.

1. In both circuits the dc level added to the o/p voltage is approximately equal to Vcc/2. 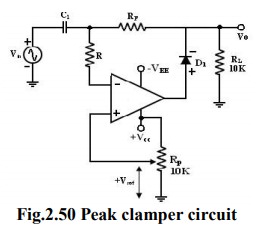 In this circuit, the input waveform peak is clamped at Vref. For this reason, the circuit is called the peak clamper.

First consider the input voltage Vref at the (+) input: since this volt is +ve, V‘0 is also +ve which forward biases D1. This closed the feedback loop. 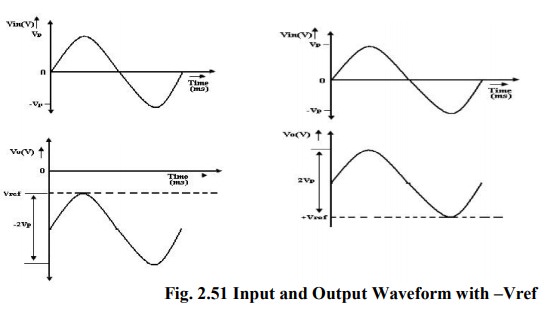 Where Rd = resistance of diode D1 when it is forward biased.

Resistor R is used to protect the op-amp against excessive discharge currents from capacitor Ci especially when the dc supply voltages are switched off. A +ve peak clamping is accomplished by reversing D1 and using –ve reference voltage (-Vref).