A volcano is an opening in the earth's crust through which magma, gases and ash are released to the earth's surface. The molten rock material found in the interior of the earth is called magma. It can be noted that when magma reaches the earth’s surface, it is known as lava (Figure. 3.25). Vent is an opening or mouth of a volcano. Fumaroles are the gushing fumes through the gap in the volcano. Crater is a saucer shaped depression in the mouth of a volcano. When the crater is widened, it is called as Earthquake,Iran-Iraq border, 2017 Caldera. Volcanic ash consists of fragments of pulverized rock, minerals and volcanic glass, created during volcanic eruptions. Volcano generally erupts either through the vent (E.g. Mt. Fujiyama, Japan) or fissure (The Deccan Plateau, India). 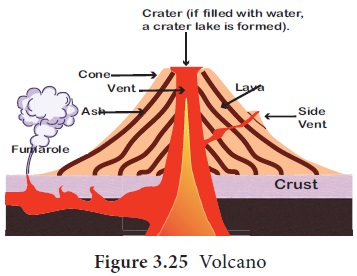 Pumice is a volcanic rock produced when lava with a very high content of water and gases is discharged from a volcano.

The following are the causes of volcanic eruptions:

Weak Zones in the Earth Crust: The parts of the earth where two tectonic plates collide against or drift apart from each other are considered very weak. Volcanoes may erupt in such zones, for example, African and Eurasian plates.

Magma Saturated with Gases: The magma, in the interior of the earth, is often found saturated with gases like carbon dioxide, and hydrogen sulfide. These gases together with water vapour make the magma highly explosive. Magma is forced out as lava on the surface of the earth due to the pressure exerted by these gases.

Based on the frequency of eruption, there are three types of volcanoes:

2. Dormant Volcanoes: These volcanoes may not have erupted in the recent past but there is a possibility of eruption at any time. In other words, they may lie dormant awaiting active eruption anytime. Sometimes gases and steam come out of them. They cause great destruction to life and property once they become active again. Mt. Vesuvius of Italy and Mt. Fujiyama of Japan are examples.

3. Extinct Volcanoes: These volcanoes have exhausted their energy and have not erupted during the known geological period. The vent of these volcanoes remains closed with solidified lava. The formations such as craters may be filled with water and crater lakes may be formed. The slopes of these landforms may be covered with vegetation. Popa in Myanmar and Mt. Kenya in eastern Africa are the examples of extinct volcano.

On the basis of nature of eruption and form developed on the surface, they are classified into following types:

1. Shield Volcanoes: These are made up of basalt, a type of lava that is very fluid when erupted. They become explosive when water gets into the vent. They develop into a cinder cone. Hawaiian volcano is an example of this category.

2. Composite cone volcanoes: They are also called 'strato volcanoes'. They are cone-shaped volcanoes composed of layers of lava, ash and rock debris. Mount Vesuvius and Mount St. Helens are examples of composite volcanoes.

3. Cinder Cone Volcano : It forms when magma is thrown out to the surface, cooled in to ash and cinders and settled around the mouth of volcano. It is less dangerous than other volcanoes.

4. Lava Dome: Unlike composite and shield volcanoes, lava domes are of significantly smaller structure. They are formed when the lava is too viscous to flow to a great distance. As the lava dome slowly grows, the outer surface cools and hardens as the lava continues to pile within. Eventually, the internal pressure can shatter the outer surface, causing loose fragments to spill down its sides.

The greatest volcanic explosion known to humans is perhaps Mt. Krakatau in August 1883.

Krakatau is a small volcanic island in the Sunda Straits, between Java and Sumatra.

The explosion could be heard in Australia, almost 4,000 km away.

The vibration set up enormous waves over 30 m high which drowned 36,000 people in the coastal districts of Indonesia.

Showers of cinders and bombs can cause damage to life and properties. Sometimes ash can precipitate under the influence of rain and completely cover large areas.

The Kimberlite rock of South Africa, the source of diamonds, is the pipe of an ancient volcano.

In the vicinity of active volcanoes, waters in the depth are heated from contact with hot magma giving rise to springs and geysers. The Puga valley in Ladakh region and Manikaran (Himachal Pradesh) are promising spots in India for the generation of geothermal electricity.

Distribution of Volcanoes across the World

Most known volcanic activity and the earthquakes occur along converging plate margins and mid-oceanic ridges. The major regions of volcanic distributions are as follows.

The Mid Atlantic Region coasts has comparatively fewer active volcanoes but many dormant or extinct volcanoes, example. St. Helena, Cape Verde Islands and the Canary Islands. But the volcanoes of Iceland and the Azores are active.

3. The Great Rift valley of Africa

In Africa some volcanoes are found along the East African Rift Valley. Kilimanjaro and Mt. Kenya are extinct volcanoes. The only active volcano in West Africa is Mt. Cameroon.

Elsewhere in the interiors of continents of Asia, North America and Europe active volcanoes are rare. There are no volcanoes in Australia.

There are no volcanoes in the Himalayan region of India. However, Barren Island, lying 135 km north-east of Port Blair became active in 1991 and 1995.

However, the other volcanic island in Indian Territory is Narcondam (Andaman and Nicobar Islands) It is probably extinct. Its crater wall has been completely destroyed.