The interior of the earth is composed of many minerals both in the solid and liquid state.

The interior of the earth is composed of many minerals both in the solid and liquid state. The temperature in general increases at the rate of 1 ° C for every 32 metres towards the earth’s interior.

Look at the figure.3.4 the layers of the earth. Earth’s interior can be divided into the crust, upper mantle, lower mantle, outer core, and inner core. 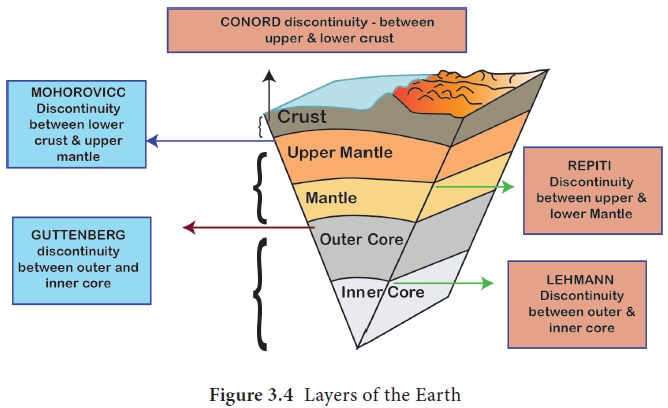 The mantle is composed of silica, magnesium and iron. It lies between the lower crust and the outer core. It extends for about 2,900 km. It is divided into upper mantle and lower mantle. The mantle generally is in a solid state. The upper part of the mantle is called asthenosphere. The word Asthen in Greek means weak. It extends up to 400 km and it is the main source of magma. The Mohorovicic is the boundary which divides the lower crust and the upper mantle. The density of the mantle is 3.9 g/cm3.

The core forms the centre of the earth. Its density is 13.0 g/cm3. Its temperature is about 5500 ° C to 6000 ° C. The core has two parts namely the outer core and the inner core. The boundary between the lower mantle and the outer core is called Guttenberg margin.