A fault is a break in earth’s crust where blocks of rock crust slide past each other.

A fault is a break in earth’s crust where blocks of rock crust slide past each other.

Usually it occurs along plate boundaries, where the forces of plate motion compress, pull or shear the crust that breaks the crust. Energy release associated with rapid movement on active faults is the cause of most earthquakes.

A fault scarp is the steep wall like slope caused by faulting of the crustal rocks. Sometimes the fault scrap is so steep that it resembles a cliff.

Based on how plates move about, the fault can be divided into as follow:

Vertical displacement of the crust is called a normal fault. The normal fault is caused by tensional forces where plates diverge. One block lies above the other (hanging wall). The other block lies below the fault (footwall). 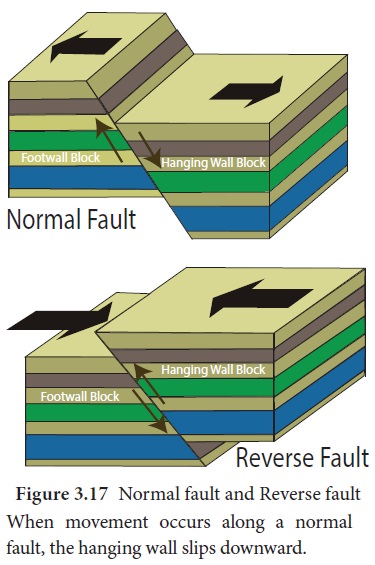 Landforms made by Normal fault are: 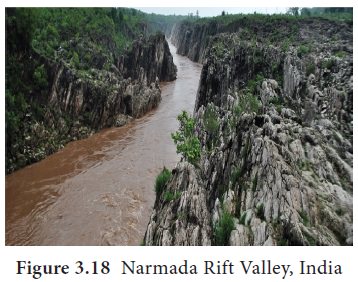 A Rift Valley may subsequently get filled by water and a river may flow through it. Normally, a rift valley is long, narrow and very deep. For example,

·           Rhine rift Valley is flanked by two Block Mountains namely the Vosges and the Black Forest.

·           The rift of River Narmada in India lies between the Vindhyas and Satpura block mountains.

The Great Rift Valley of Africa is the longest rift valley in the world. It stretches for 6,400 km from Mozambique in the south to Syria in the north. The depressions have become lakes. The lakes of Africa, Dead Sea of Israel and the Red Sea form the parts of the Great Rift Valley.

When a block of land between two faults is pushed up, block mountain or horst is formed. In this case, the central block is not only up thrown but the side blocks are also relatively downthrown so that the whole central mass appears like a dome.

In India, specifically the mountain ranges of Vindhya and Satpura found in the central western part of the India are block mountains.

A reverse fault is a horizontal displacement of the crust. It is formed where two fractured blocks move towards each other. It is caused by compressional forces along convergent plate boundaries. One side of the fault lies at an angle above the other.

It is created by shearing along transform boundaries. Rocks on either side of fault slip past each other sideways with little up or down motion. It mostly occurs in the ocean basin and connects offsets in the mid ocean ridge. 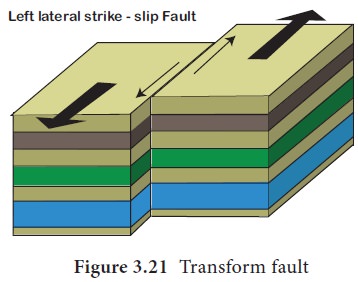