Earthquake is a sudden shaking of the earth’s surface.

Earthquake is a sudden shaking of the earth’s surface. Focus is the location inside the earth where the earthquake originates. Epicenter is the point on the earth's surface vertically above the focus of an earthquake. Earthquake results from the sudden release of pressure which has slowly built up within the earth’s crust. Energy is released in the form of shockwaves known as seismic waves. The seismic waves can broadly be classified into two types namely Body waves and surface waves. 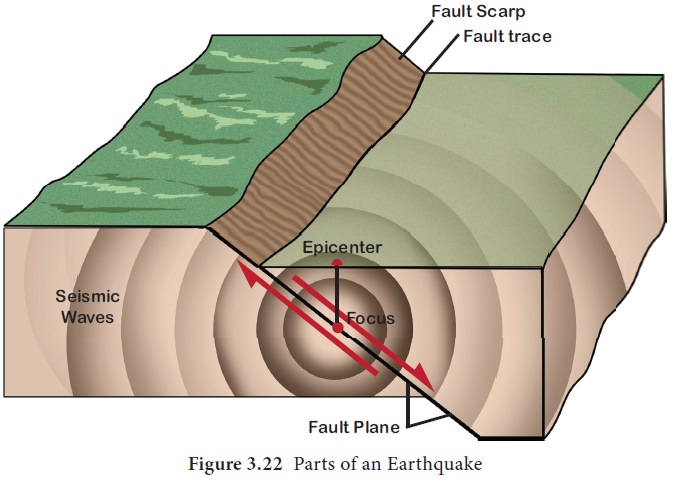 1. Body Waves are the waves that travel through the interior of the earth. They are further divided into the following.

a. P or Primary or Compressional waves are the fastest seismic waves (6 km/ sec. in the upper crust). They cause the matter to oscillate forward and backward, parallel to the motion of the seismic wave front. P waves push (compress) and pull (dilate) the rock that they pass through. They pass through all medium.

b. S or Secondary or Shear waves are slower than the primary waves (3.5 km/sec. in the upper crust). They cause matter to oscillate side to side, perpendicular to the motion of the wave front. S waves shear the rock that they pass through. They pass through only solid medium.

II. Surface Waves are the waves that travel along the earth's surface. They are slower than body waves. They cause damage during earthquakes.

Love waves shake the ground side to side like S wave.

Rayleigh waves displace the ground like rolling ocean waves. The ground rolls forward and up and then down and backwards. This is similar to a p wave but with the extra up-down motion.

It is estimated that about 100,000 earthquakes occur but all cannot be felt. A few earthquakes may be severe causing huge damage to property. Earthquake magnitude is measured on the Richter scale (named after the seismologist who devised it), which rates them on a scale of 1 to 10. Earthquake intensity is measured on the modified Mercalli scale, which ranges from 1 to 12, depending upon the intensity. The seismograph is an instrument used to detect and record seismic waves created by the earthquakes.

Description of effects of earthquake in Richter scale 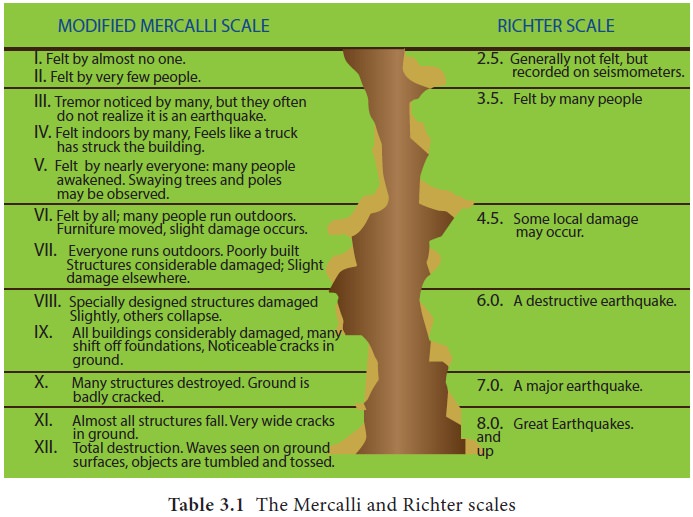 There are many factors controlling the occurrence of the earthquake. Some of the major factors include:

4.        Other Reasons: The nuclear explosions also release massive energy to cause tremors in the earth crust. When underground cave collapses, earthquake may occur.

Effects of the Earthquakes

5.        Tsunami - The high amplitude oceanic waves caused by submarine earthquake (measuring more than 7 on Richter scale). The seismic waves travel through seawater generates high sea waves. They cause severe loss of life and property. For instance, on 26th December 2004, a tsunami originating from a magnitude 8.9 earthquake in northern Sumatra killed over 1,50,000 people in countries surrounding the Indian Ocean.

1. Circum-Pacific region: This region includes all the coastal areas around the Pacific Ocean. It extends through the coasts of Alaska, Aleutian Islands, Japan, Philippines, New Zealand, west coast of North and South America. This zone accounts for 68% of all earthquakes on the surface of the earth.

2. Mediterranean-Himalayan region: This region extends from Alps mountain to the Himalayan Mountains and Tibet to China. About 31% of world's earthquakes occur in this region.

3. Other Areas: These include Northern Africa and Rift Valley areas of the Red Sea and the Dead Sea. 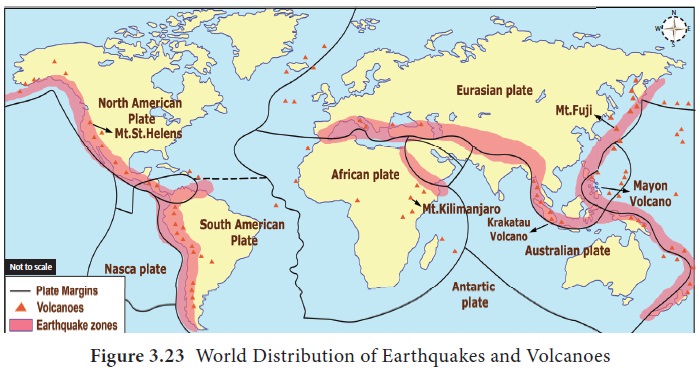