Based on their origin, the rocks are classified as follows:

Rock is the solid mineral material forming the surface of the earth. Petrology is the science of rocks. The age of the rock is determined based on Carbon-14 dating.

Based on their origin, the rocks are classified as follows:

Granite is less dense and is lighter in colour than basalt rocks.

Intrusive Igneous rocks are formed when magma rises and cools within the crust. The intrusive activity of volcanoes gives rise to various forms. We see them one by one as follow.

Batholiths are large rock masses formed due to cooling and solidification of hot magma inside the earth. It is granitic in origin.

Laccoliths are large dome-shaped intrusive rock connected by a pipe-like conduit from below. These are basically intrusive counterparts of an exposed domelike batholiths. The Karnataka plateau is spotted with dome hills of granite rocks. Most of these, now exfoliated, are examples of laccoliths.

When the magma makes its way through cracks and the fissures developed in the land, it solidifies almost perpendicular to the ground. It gets cooled in the same position to develop a wall-like structure. Such structures are called dikes.

These are the most commonly found intrusive forms in the western Maharashtra area. These are considered the feeders for the eruptions that led to the development of the Deccan traps.

Sedimentary rocks are also called as detrital rocks. They are formed as a result of denudation. These deposits through compaction turn into sedimentary rocks.

They occupy only 5 percent of the earth. They are layered or stratified of varying thickness. Example: sandstone, shale etc. Ice deposited sedimentary rocks is called Till. Wind-deposited sediments are called Loess. 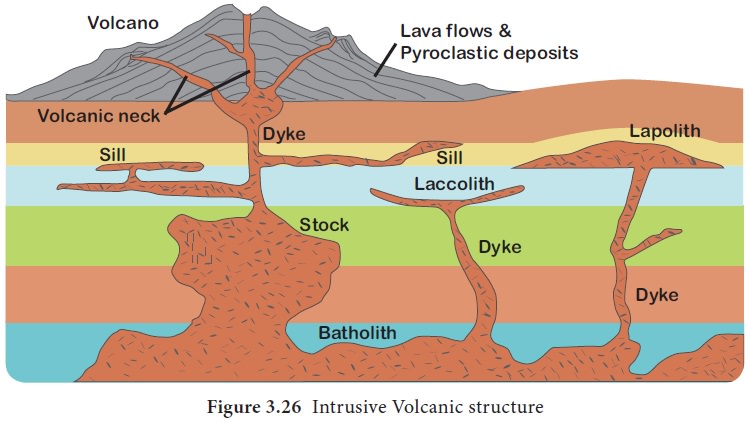 The word metamorphic means ‘change of form’. The metamorphic rocks form under the action of pressure, volume and temperature (PVT) change.

Metamorphism is a process by which the already consolidated rocks undergo recrystallisation and reorganization of materials within original rocks. Gneiss, slate, schist, diamond, marble, quartzite etc. are some examples of metamorphic rocks. The igneous and metamorphic rocks together account for 95 percent of the earth.