Vitamin D has a potent effect to increase calcium absorption from the intestinal tract; it also has impor-tant effects on both bone deposition and bone absorption, as discussed later.

Vitamin D has a potent effect to increase calcium absorption from the intestinal tract; it also has impor-tant effects on both bone deposition and bone absorption, as discussed later. However, vitamin D itself is not the active substance that actually causes these effects. Instead, vitamin D must first be converted through a succession of reactions in the liver and the kidneys to the final active product, 1,25-dihydroxycholecalciferol, also called 1,25(OH)2D3. Figure 79–6 shows the suc-cession of steps that lead to the formation of this sub-stance from vitamin D. Let us discuss these steps. 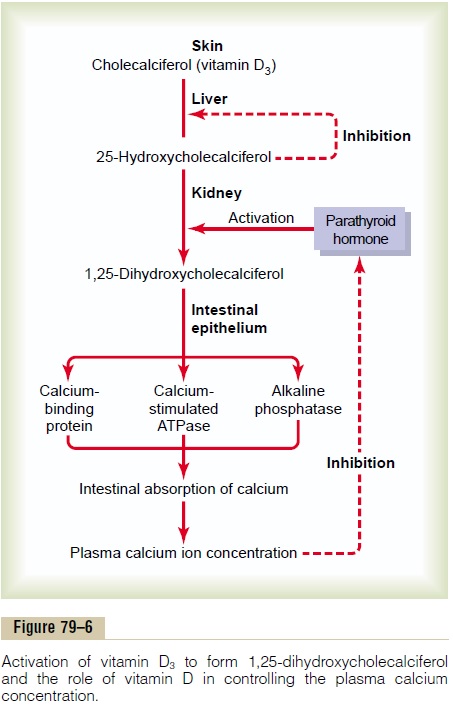 Cholecalciferol (Vitamin D3) Is Formed in the Skin. Severalcompounds derived from sterols belong to the vitamin D family, and they all perform more or less the same functions. Vitamin D3 (also called cholecalciferol) is the most important of these and is formed in the skin as a result of irradiation of 7-dehydrocholesterol, a sub-stance normally in the skin, by ultraviolet rays from the sun. Consequently, appropriate exposure to the sun prevents vitamin D deficiency. The additional vitamin D compounds that we ingest in food are iden-tical to the cholecalciferol formed in the skin, except for the substitution of one or more atoms that do not affect their function.

First, the feedback mechanism precisely regulates the concentration of 25-hydroxycholecalciferol in the plasma, an effect that is shown in Figure 79–7. Note that the intake of vitamin D3 can increase many times, 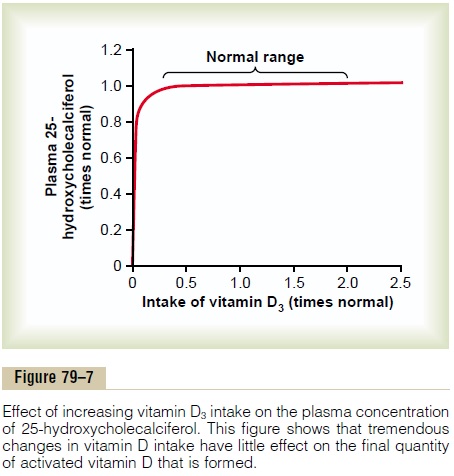 and yet the concentration of 25-hydroxycholecalcif-erol remains nearly normal. This high degree of feed-back control prevents excessive action of vitamin D when intake of vitamin D3 is altered over a wide range. 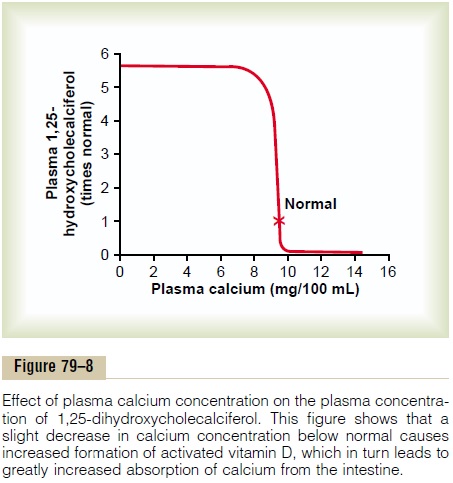 When the plasma calcium concentration is already too high, the formation of 1,25-dihydroxycholecalcif-erol is greatly depressed. Lack of this in turn decreases the absorption of calcium from the intestines, the bones, and the renal tubules, thus causing the calcium ion concentration to fall back toward its normal level.

The active form of vitamin D, 1,25-dihydroxycholecal-ciferol, has several effects on the intestines, kidneys, and bones that increase absorption of calcium and phosphate into the extracellular fluid and contribute to feedback regulation of these substances.

“Hormonal” Effect of Vitamin D to Promote Intestinal Calcium Absorption. 1,25-Dihydroxycholecalciferol itself func-tions as a type of “hormone” to promote intestinal absorption of calcium. It does this principally by increasing, over a period of about 2 days, formation of a calcium-binding protein in the intestinal epithelial cells. This protein functions in the brush border of these cells to transport calcium into the cell cytoplasm, and the calcium then moves through the basolateral membrane of the cell by facilitated diffusion. The rate of calcium absorption is directly proportional to the quantity of this calcium-binding protein. Furthermore, this protein remains in the cells for several weeks after the 1,25-dihydroxycholecalciferol has been removed from the body, thus causing a prolonged effect on calcium absorption.

Other effects of 1,25-dihydroxycholecalciferol that might play a role in promoting calcium absorption are the formation of (1) a calcium-stimulated ATPase in the brush border of the epithelial cells and (2) an alka-line phosphatase in the epithelial cells. The precise details of all these effects are unclear.

Although phosphate is usually absorbed easily, phos-phate flux through the gastrointestinal epithelium is enhanced by vitamin D. It is believed that this results from a direct effect of 1,25-dihydroxycholecalciferol, but it is possible that it results secondarily from this hormone’s action on calcium absorption, the cal-cium in turn acting as a transport mediator for the phosphate.

Vitamin D also increases calcium and phosphate absorption by the epithelial cells of the renal tubules, thereby tending to decrease excretion of these sub-stances in the urine. However, this is a weak effect and probably not of major importance in regulating the extracellular fluid concentration of these substances.

Effect of Vitamin D on Bone and Its Relation to Parathyroid Hormone Activity. Vitamin D plays important roles inboth bone absorption and bone deposition. The administration of extreme quantities of vitamin Dcauses absorption of bone. In the absence of vitaminD, the effect of PTH in causing bone absorption (dis-cussed in the next section) is greatly reduced or even prevented. The mechanism of this action of vitamin D is not known, but it is believed to result from the effect of 1,25-dihydroxycholecalciferol to increase calcium transport through cellular membranes.

Vitamin D in smaller quantities promotes bone cal-cification. One of the ways in which it does this is toincrease calcium and phosphate absorption from the intestines. However, even in the absence of such increase, it enhances the mineralization of bone. Here again, the mechanism of the effect is unknown, but it probably also results from the ability of 1,25-dihy-droxycholecalciferol to cause transport of calcium ions through cell membranes—but in this instance, perhaps in the opposite direction through the osteoblastic or osteocytic cell membranes.