Home | | Medical Physiology | Effect of Parathyroid Hormone on Calcium and Phosphate Concentrations in the Extracellular Fluid
Posted On :  28.07.2017 01:55 am

Note that at the onset of infusion the calcium ion concentration begins to rise and reaches a plateau in about 4 hours. 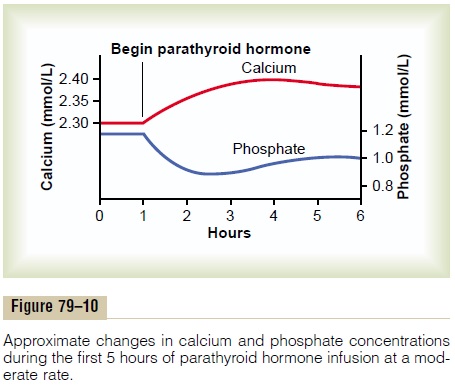 Parathyroid Hormone Increases Calcium and Phosphate Absorption from the Bone

PTH has two effects on bone in causing absorption of calcium and phosphate. One is a rapid phase that begins in minutes and increases progressively for several hours. This phase results from activation of the already existing bone cells (mainly the osteocytes) to promote calcium and phosphate absorption. The second phase is a much slower one, requiring several days or even weeks to become fully developed; it results from proliferation of the osteoclasts, followed by greatly increased osteoclastic reabsorption of the bone itself, not merely absorption of the calcium phos-phate salts from the bone.

Rapid Phase of Calcium and Phosphate Absorption—Osteoly- sis. When large quantities of PTH are injected, thecalcium ion concentration in the blood begins to rise within minutes, long before any new bone cells can be developed. Histological and physiologic studies have shown that PTH causes removal of bone salts from two areas in the bone: (1) from the bone matrix in the vicinity of the osteocytes lying within the bone itself and (2) in the vicinity of the osteoblasts along the bone surface.

One does not usually think of either osteoblasts or osteocytes functioning to cause bone salt absorption, because both these types of cells are osteoblastic in nature and normally associated with bone deposition and its calcification. However, studies have shown that the osteoblasts and osteocytes form a system of inter-connected cells that spreads all through the bone and over all the bone surfaces except the small surface areas adjacent to the osteoclasts. In fact, long, filmy processes extend from osteocyte to osteocyte through-out the bone structure, and these processes also connect with the surface osteocytes and osteoblasts.

This extensive system is called the osteocytic mem-brane system, and it is believed to provide a membranethat separates the bone itself from the extracellular fluid.

But where does PTH fit into this picture? First, the cell membranes of both the osteoblasts and the osteocytes have receptor proteins for binding PTH. PTH can activate the calcium pump strongly, thereby causing rapid removal of calcium phosphate salts from those amorphous bone crystals that lie near the cells. PTH is believed to stimulate this pump by increasing the calcium permeability of the bone fluid side of the osteocytic membrane, thus allowing calcium ions to diffuse into the membrane cells from the bone fluid. Then the calcium pump on the other side of the cell membrane transfers the calcium ions the rest of the way into the extracellular fluid.

Slow Phase of Bone Absorption and Calcium Phosphate Release—Activation of the Osteoclasts. A much betterknown effect of PTH and one for which the evidence is much clearer is its activation of the osteoclasts. Yet the osteoclasts do not themselves have membrane receptor proteins for PTH. Instead, it is believed that the activated osteoblasts and osteocytes send a sec-ondary but unknown “signal” to the osteoclasts, causing them to set about their usual task of gobbling up the bone over a period of weeks or months.

After a few months of excess PTH, osteoclastic resorption of bone can lead to weakened bones and secondary stimulation of the osteoblasts that attempt to correct the weakened state. Therefore, the late effect is actually to enhance both osteoblastic and osteoclastic activity. Still, even in the late stages, there is more bone absorption than bone deposition in the presence of continued excess PTH.

Bone contains such great amounts of calcium in comparison with the total amount in all the extracel-lular fluids (about 1000 times as much) that even when PTH causes a great rise in calcium concentration in the fluids, it is impossible to discern any immediate effect on the bones. Prolonged administration or secretion of PTH—over a period of many months or years—finally results in very evident absorption in all the bones and even development of large cavities filled with large, multinucleated osteoclasts.

Administration of PTH causes rapid loss of phosphate in the urine owing to the effect of the hormone to diminish proximal tubular reabsorption of phosphate ions.

Were it not for the effect of PTH on the kidneys to increase calcium reabsorption, continual loss of calcium into the urine would eventually deplete both the extracellular fluid and the bones of this mineral.

At this point, we should be reminded again that PTH greatly enhances both calcium and phosphate absorp-tion from the intestines by increasing the formation in the kidneys of 1,25-dihydroxycholecalciferol from vitamin D.

Cyclic Adenosine Monophosphate Mediates the Effects of Parathyroid Hormone. A large share of the effect of PTHon its target organs is mediated by the cyclic adeno-sine monophosphate (cAMP) second messenger mechanism. Within a few minutes after PTH adminis-tration, the concentration of cAMP increases in the osteocytes, osteoclasts, and other target cells. This cAMP in turn is probably responsible for such func-tions as osteoclastic secretion of enzymes and acids to cause bone reabsorption and formation of 1,25-dihydroxycholecalciferol in the kidneys. There are probably other direct effects of PTH that function independently of the second messenger mechanism.