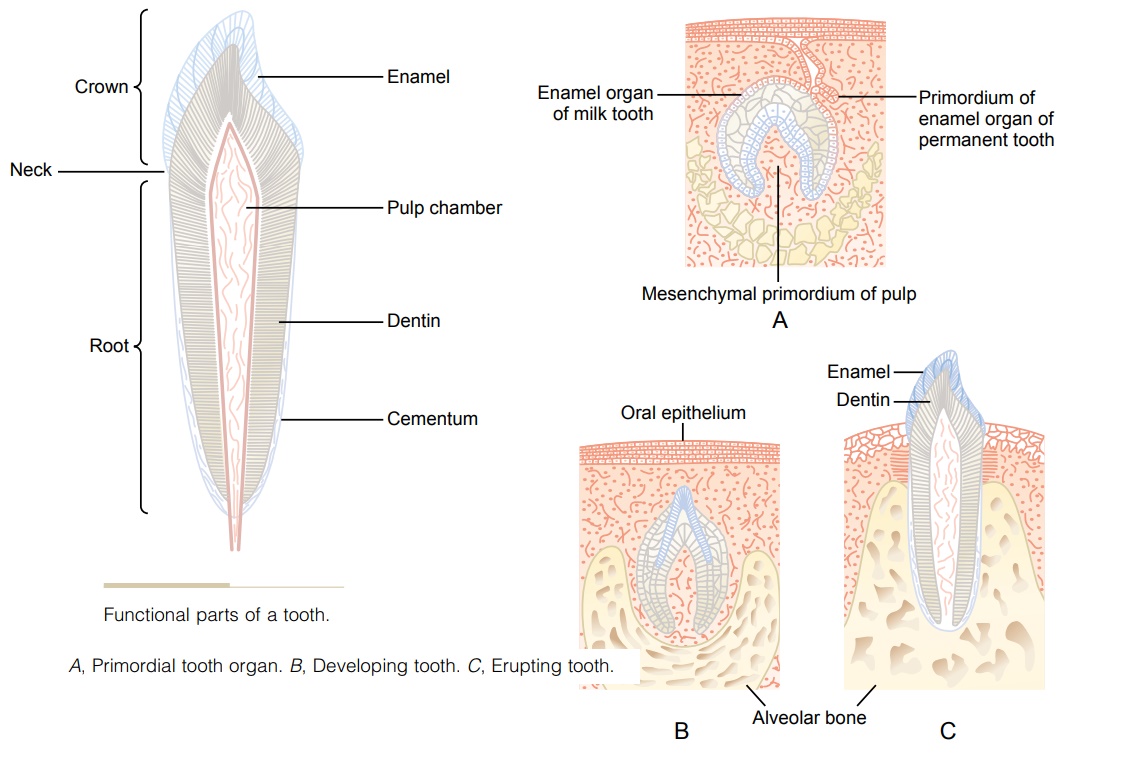 Figure 79–12 shows a sagittal section of a tooth, demonstrating its major functional parts: the enamel, dentin, cementum, and pulp.

Figure 79–12 shows a sagittal section of a tooth, demonstrating its major functional parts: the enamel, dentin, cementum, and pulp. The tooth can also bedivided into the crown, which is the portion that pro-trudes out from the gum into the mouth, and the root, which is the portion within the bony socket of the jaw. The collar between the crown and the root where the tooth is surrounded by the gum is called the neck.

Enamel. The outer surface of the tooth is covered by alayer of enamel that is formed before eruption of the tooth by special epithelial cells called ameloblasts. Once the tooth has erupted, no more enamel is formed. Enamel is composed of very large and very dense crystals of hydroxyapatite with adsorbed carbonate, magnesium, sodium, potassium, and other ions imbedded in a fine meshwork of strong and almost insoluble protein fibers that are similar in phys-ical characteristics (but not chemically identical) to the keratin of hair. 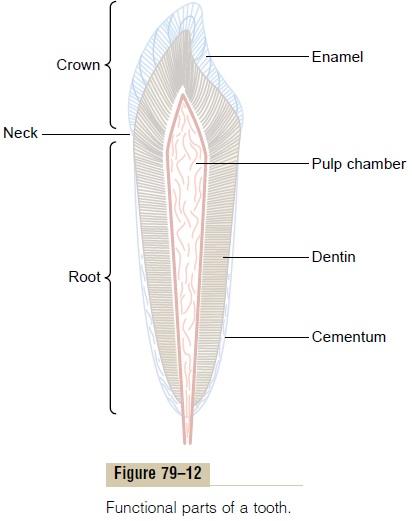 The crystalline structure of the salts makes the enamel extremely hard-much harder than the dentin. Also, the special protein fiber meshwork, although constituting only about 1 per cent of the enamel mass, makes enamel resistant to acids, enzymes, and other corrosive agents because this protein is one of the most insoluble and resistant proteins known.

Dentin. The main body of the tooth is composed ofdentin, which has a strong, bony structure. Dentin is made up principally of hydroxyapatite crystals similar to those in bone but much more dense. These crystals are imbedded in a strong meshwork of collagen fibers. In other words, the principal constituents of dentin are very much the same as those of bone. The major dif-ference is its histological organization, because dentin does not contain any osteoblasts, osteocytes, osteo-clasts, or spaces for blood vessels or nerves. Instead, it is deposited and nourished by a layer of cells called odontoblasts, which line its inner surface along the wallof the pulp cavity.

The calcium salts in dentin make it extremely resist-ant to compressional forces, and the collagen fibers make it tough and resistant to tensional forces that might result when the teeth are struck by solid objects. 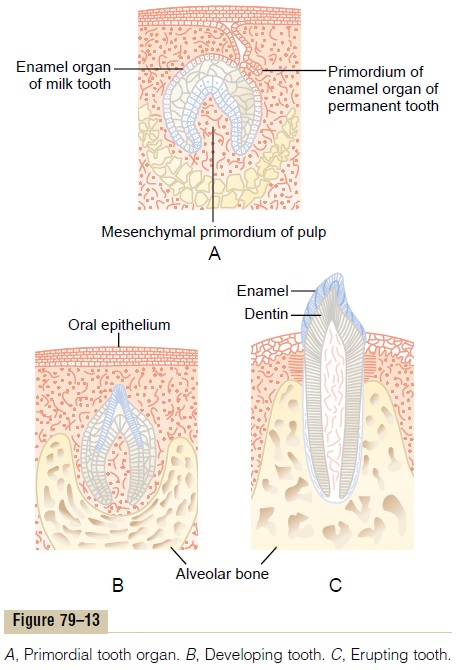 Cementum. Cementum is a bony substance secretedby cells of the periodontal membrane, which lines the tooth socket. Many collagen fibers pass directly from the bone of the jaw, through the periodontal membrane, and then into the cementum. These colla-gen fibers and the cementum hold the tooth in place. When the teeth are exposed to excessive strain, the layer of cementum becomes thicker and stronger. Also, it increases in thickness and strength with age, causing the teeth to become more firmly seated in the jaws by adulthood and later.

Pulp. The pulp cavity of each tooth is filled withpulp,which is composed of connective tissue with an abun-dant supply of nerve fibers, blood vessels, and lym-phatics. The cells lining the surface of the pulp cavity are the odontoblasts, which, during the formative years of the tooth, lay down the dentin but at the same time encroach more and more on the pulp cavity, making it smaller. In later life, the dentin stops growing and the pulp cavity remains essentially constant in size. However, the odontoblasts are still viable and send projections into small dentinal tubules that penetrate all the way through the dentin; they are of importance for exchange of calcium, phosphate, and other miner-als with the dentin.