Home | | Medical Physiology | Overview of Calcium and Phosphate Regulation in the Extracellular Fluid and Plasma
Posted On :  28.07.2017 01:48 am

Extracellular fluid calcium concentration normally is regulated very precisely, seldom rising or falling more than a few per cent from the normal value of about 9.4 mg/dl, which is equivalent to 2.4 mmol calcium per liter.

Extracellular fluid calcium concentration normally is regulated very precisely, seldom rising or falling more than a few per cent from the normal value of about 9.4 mg/dl, which is equivalent to 2.4 mmol calcium per liter. This precise control is essential, because calcium plays a key role in many physiologic processes, including contraction of skeletal, cardiac, and smooth muscles; blood clotting; and transmission of nerve impulses, to name just a few. Excitable cells, such as neurons, are very sensitive to changes in calcium ion concentrations, and increases in calcium ion concentration above normal (hypercalcemia) cause pro-gressive depression of the nervous system; conversely, decreases in calcium con-centration (hypocalcemia) cause the nervous system to become more excited.

Calcium in the Plasma and Interstitial Fluid

The calcium in the plasma is present in three forms, as shown in Figure 79–1. 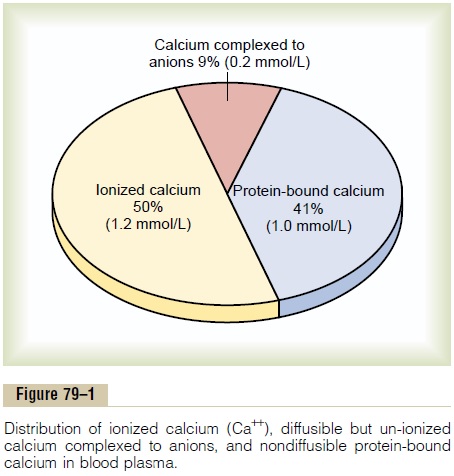 1.              About 41 per cent (1 mmol/L) of the calcium is combined with the plasma proteins and in this form is nondiffusible through the capillary membrane.

Thus, the plasma and interstitial fluids have a normal calcium ion concentration of about 1.2 mmol/L (or 2.4 mEq/L, because it is a divalent ion), a level only one half the total plasma calcium concentration. This ionic calcium is the form that is important for most functions of calcium in the body, including the effect of calcium on the heart, the nervous system, and bone formation.

Inorganic Phosphate in the Extracellular Fluids

Because it is difficult to determine chemically the exact quantities of HPO4- and H2PO4- in the blood, ordinarily the total quantity of phosphate is expressed in terms of milligrams of phosphorus per deciliter (100 ml) of blood. The average total quantity of inor-ganic phosphorus represented by both phosphate ions is about 4 mg/dl, varying between normal limits of 3 to 4 mg/dl in adults and 4 to 5 mg/dl in children.

Changing the level of phosphate in the extracellular fluid from far below normal to two to three times normal does not cause major immediate effects on the body. In contrast, even slight increases or decreases of calcium ion in the extracellular fluid can cause extreme immediate physiologic effects. In addition, chronic hypocalcemia or hypophosphatemia greatly decreases bone mineralization, as explained later.

Figure 79–2 shows tetany in the hand, which usually occurs before tetany develops in most other parts of the body. This is called “carpopedal spasm.” 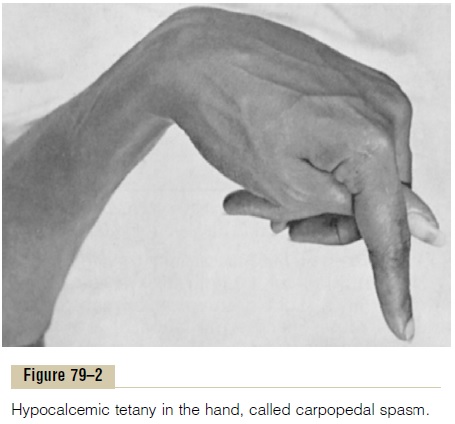 Tetany ordinarily occurs when the blood concentra-tion of calcium falls from its normal level of 9.4 mg/dl to about 6 mg/dl, which is only 35 per cent below the normal calcium concentration, and it is usually lethal at about 4 mg/dl.

In laboratory animals, in which calcium can gradu-ally be reduced beyond the usual lethal levels, very extreme hypocalcemia can cause other effects that are seldom evident in patients, such as marked dilatation of the heart, changes in cellular enzyme activities, increased membrane permeability in some cells (in addition to nerve cells), and impaired blood clotting.

When the level of calcium in the body fluids rises above normal, the nervous system becomes depressed and reflex activities of the central nervous system are sluggish. Also, increased calcium ion concentration decreases the QT interval of the heart and causes lack of appetite and constipation, probably because of depressed contractility of the muscle walls of the gas-trointestinal tract.

Absorption and Excretion of Calcium and Phosphate

Intestinal Absorption and Fecal Excretion of Calcium and Phos- phate. The usual rates of intake are about 1000 mg/dayeach for calcium and phosphorus, about the amounts in 1 liter of milk. Normally, divalent cations such as calcium ions are poorly absorbed from the intestines. However, as discussed later,vitamin D promotes calcium absorption by the intestines, and about 35 per cent (350 mg/day) of the ingested calcium is usually absorbed; the calcium remaining in the intestine is excreted in the feces. An additional 250 mg/day of calcium enters the intestines via secreted gastroin-testinal juices and sloughed mucosal cells. Thus, about 90 per cent (900 mg/day) of the daily intake of calcium is excreted in the feces (Figure 79–3). 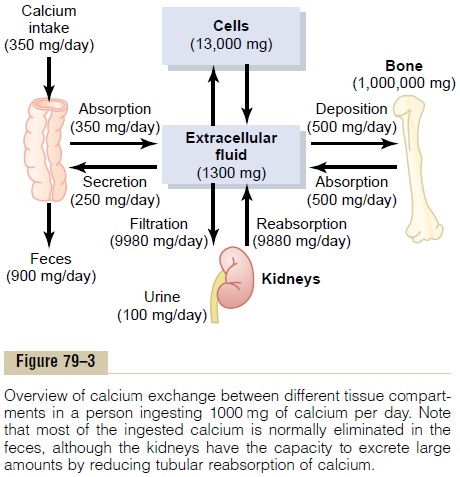 Renal Excretion of Calcium and Phosphate. Approximately10 per cent (100 mg/day) of the ingested calcium is excreted in the urine. About 41 per cent of the plasma calcium is bound to plasma proteins and is therefore not filtered by the glomerular capillaries. The rest is combined with anions such as phosphate (9 per cent) or ionized (50 per cent) and is filtered through the glomeruli into the renal tubules.

Normally, the renal tubules reabsorb 99 per cent of the filtered calcium, and about 100 mg/day is excreted in the urine. Approximately 90 per cent of the calcium in the glomerular filtrate is reabsorbed in the proximal tubules, loops of Henle, and early distal tubules.

Then in the late distal tubules and early collecting ducts, reabsorption of the remaining 10 per cent is very selective, depending on the calcium ion concentration in the blood.

When calcium concentration is low, this reabsorp-tion is great, so that almost no calcium is lost in the urine. Conversely, even a minute increase in blood calcium ion concentration above normal increases calcium excretion markedly. We shall see later that the most important factor controlling this reabsorption of calcium in the distal portions of the nephron, and therefore controlling the rate of calcium excretion, is PTH.

However, as discussed later, PTH can greatly increase phosphate excretion by the kidneys, thereby playing an important role in the control of plasma phosphate concentration as well as calcium concentration.