Calcitonin, a peptide hormone secreted by the thyroid gland, tends to decrease plasma calcium concentration and, in general, has effects opposite to those of PTH.

Calcitonin, a peptide hormone secreted by the thyroid gland, tends to decrease plasma calcium concentration and, in general, has effects opposite to those of PTH. However, the quantitative role of calcitonin is far less than that of PTH in regulating calcium ion concentration.

Synthesis and secretion of calcitonin occur in the parafollicular cells, or C cells, lying in the interstitialfluid between the follicles of the thyroid gland. These cells constitute only about 0.1 per cent of the human thyroid gland and are the remnants of the ultimo-brachial glands of lower animals such as fish, amphib-ians, reptiles, and birds. Calcitonin is a 32-amino acid peptide with a molecular weight of about 3400.

In young animals, but much less so in older animals and in humans, an increase in plasma calcium concen-tration of about 10 per cent causes an immediate twofold or more increase in the rate of secretion of cal-citonin, which is shown by the blue line in Figure 79–11. This provides a second hormonal feedback mechanism for controlling the plasma calcium ion concentration, but one that is relatively weak and works in a way opposite that of the PTH system. 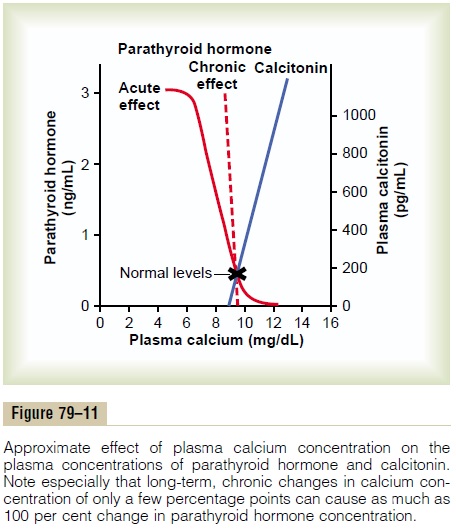 1. The immediate effect is to decrease the absorptive activities of the osteoclasts and possibly the osteolytic effect of the osteocytic membrane throughout the bone, thus shifting the balance in favor of deposition of calcium in the exchangeable bone calcium salts. This effect is especially significant in young animals because of the rapid interchange of absorbed and deposited calcium.

2. The second and more prolonged effect of calcitonin is to decrease the formation of new osteoclasts. Also, because osteoclastic resorption of bone leads secondarily to osteoblastic activity, decreased numbers of osteoclasts are followed by decreased numbers of osteoblasts. Therefore, over a long period, the net result is reduced osteoclastic and osteoblastic activity and, consequently, very little prolonged effect on plasma calcium ion concentration. That is, the effect on plasma calcium is mainly a transient one, lasting for a few hours to a few days at most.

Calcitonin also has minor effects on calcium han-dling in the kidney tubules and the intestines. Again, the effects are opposite those of PTH, but they appear to be of such little import that they are seldom considered.

Calcitonin Has a Weak Effect on Plasma Calcium Concentration in the Adult Human. The reason for the weak effect ofcalcitonin on plasma calcium is twofold. First, any initial reduction of the calcium ion concentration caused by calcitonin leads within hours to a powerful stimulation of PTH secretion, which almost overrides the calcitonin effect. When the thyroid gland is removed and calcitonin is no longer secreted, the long-term blood calcium ion concentration is not measura-bly altered, which again demonstrates the overriding effect of the PTH system of control.

Second, in the adult, the daily rates of absorption and deposition of calcium are small, and even after the rate of absorption is slowed by calcitonin, this still has only a small effect on plasma calcium ion concentra-tion. The effect of calcitonin in children is much greater because bone remodeling occurs rapidly in children, with absorption and deposition of calcium as great as 5 grams or more per day—equal to 5 to 10 times the total calcium in all the extracellular fluid. Also, in certain bone diseases, such as Paget’s disease, in which osteoclastic activity is greatly accelerated, cal-citonin has a much more potent effect of reducing the calcium absorption.