Parathyroid hormone provides a powerful mechanism for controlling extracellular calcium and phosphate concentrations by regulating intestinal reabsorption, renal excretion, and exchange between the extracellular fluid and bone of these ions.

Parathyroid hormone provides a powerful mechanism for controlling extracellular calcium and phosphate concentrations by regulating intestinal reabsorption, renal excretion, and exchange between the extracellular fluid and bone of these ions. Excess activity of the parathyroid gland causes rapid absorption of calcium salts from the bones, with resultant hypercalcemia in the extracellular fluid; conversely, hypofunction of the parathyroid glands causes hypocalcemia, often with resultant tetany.

Removal of half the parathyroid glands usually causes no major physiologic abnormalities. However, removal of three of the four normal glands causes transient hypoparathyroidism. But even a small quantity of remaining parathyroid tissue is usually capable of hypertrophying satisfactorily to perform the func-tion of all the glands. 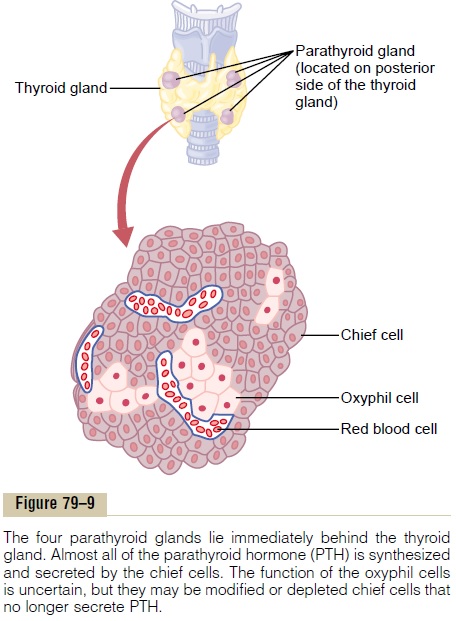 Chemistry of Parathyroid Hormone. PTH has been isolatedin a pure form. It is first synthesized on the ribosomes in the form of a preprohormone, a polypeptide chain of 110 amino acids. This is cleaved first to a prohormone with 90 amino acids, then to the hormone itself with 84 amino acids by the endoplasmic reticulum and Golgi apparatus, and finally is packaged in secretory granules in the cytoplasm of the cells. The final hormone has a molecular weight of about 9500. Smaller compounds with as few as 34 amino acids adjacent to the N terminus of the molecule have also been isolated from the parathyroid glands that exhibit full PTH activity. In fact, because the kidneys rapidly remove the whole 84-amino acid hormone within minutes but fail to remove many of the fragments for hours, a large share of the hormonal activity is caused by the fragments.