Deposition and Absorption of Bone-Remodeling of Bone

Deposition and Absorption of Bone-Remodeling of Bone 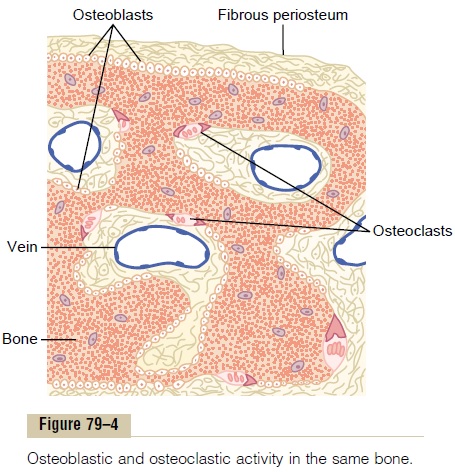 Absorption of Bone—Function of the Osteoclasts. Bone is alsobeing continually absorbed in the presence of osteo-clasts, which are large phagocytic, multinucleated cells (as many as 50 nuclei), derivatives of monocytes or monocyte-like cells formed in the bone marrow. The osteoclasts are normally active on less than 1 per cent of the bone surfaces of an adult. Later we see that PTH controls the bone absorptive activity of osteoclasts.

Histologically, bone absorption occurs immediately adjacent to the osteoclasts. The mechanism of this absorption is believed to be the following: The osteo-clasts send out villus-like projections toward the bone, forming a so-called ruffled border adjacent to the bone. The villi secrete two types of substances: (1) proteolytic enzymes, released from the lysosomes of the osteoclasts, and (2) several acids, including citric acid and lactic acid, released from the mitochondria and secretory vesicles. The enzymes digest or dissolve the organic matrix of the bone, and the acids cause solution of the bone salts. The osteoclastic cells also imbibe by phagocytosis minute particles of bone matrix and crystals, eventually also dis-soluting these and releasing the products into the blood.

Bone Deposition and Absorption Are Normally in Equilibrium

Normally, except in growing bones, the rates of bone deposition and absorption are equal to each other, so that the total mass of bone remains constant. Osteo-clasts usually exist in small but concentrated masses, and once a mass of osteoclasts begins to develop, it usually eats away at the bone for about 3 weeks, creating a tunnel that ranges in diameter from 0.2 to 1 millimeter and is several millimeters long. At the end of this time, the osteoclasts disappear and the tunnel is invaded by osteoblasts instead; then new bone begins to develop. Bone deposition then continues for several months, the new bone being laid down in successive layers of con-centric circles (lamellae) on the inner surfaces of the cavity until the tunnel is filled. Deposition of new bone ceases when the bone begins to encroach on the blood vessels supplying the area. The canal through which these vessels run, called thehaversian canal, is all that remains of the original cavity. Each new area of bone deposited in this way is called an osteon, as shown in Figure 79–5. 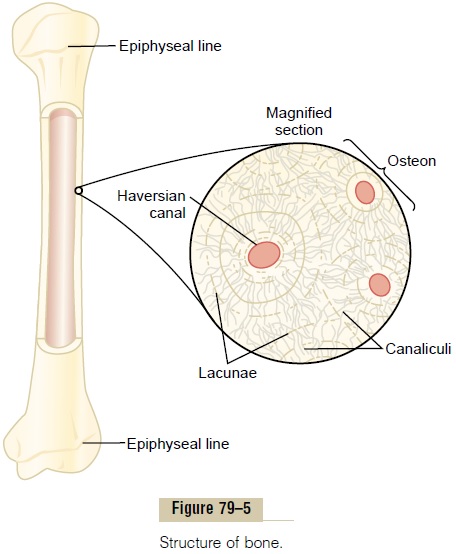 Value of Continual Bone Remodeling The continual deposi-tion and absorption of bone have several physiologi-cally important functions. First, bone ordinarily adjusts its strength in proportion to the degree of bone stress. Consequently, bones thicken when subjected to heavy loads. Second, even the shape of the bone can be rearranged for proper support of mechanical forces by deposition and absorption of bone in accordance with stress patterns. Third, because old bone becomes rela-tively brittle and weak, new organic matrix is needed as the old organic matrix degenerates. In this manner, the normal toughness of bone is maintained. Indeed, the bones of children, in whom the rates of deposition and absorption are rapid, show little brittleness in compari-son with the bones of the elderly, in whom the rates of deposition and absorption are slow.

Control of the Rate of Bone Deposition by Bone “Stress.” Boneis deposited in proportion to the compressional load that the bone must carry. For instance, the bones of athletes become considerably heavier than those of nonathletes. Also, if a person has one leg in a cast but continues to walk on the opposite leg, the bone of the leg in the cast becomes thin and as much as 30 per cent decalcified within a few weeks, whereas the opposite bone remains thick and normally calcified. Therefore, continual physical stress stimulates osteoblastic deposi-tion and calcification of bone.

Bone stress also determines the shape of bones under certain circumstances. For instance, if a long bone of the leg breaks in its center and then heals at an angle, the compression stress on the inside of the angle causes increased deposition of bone, and increased absorption occurs on the outer side of the angle where the bone is not compressed. After many years of increased deposi-tion on the inner side of the angulated bone and absorp-tion on the outer side, the bone can become almost straight, especially in children because of the rapid remodeling of bone at younger ages.

Repair of a Fracture Activates Osteoblasts. Fracture of a bonein some way maximally activates all the periosteal and intraosseous osteoblasts involved in the break. Also, immense numbers of new osteoblasts are formed almost immediately from osteoprogenitor cells, which are bone stem cells in the surface tissue lining bone, called the “bone membrane.” Therefore, within a short time, a large bulge of osteoblastic tissue and new organic bone matrix, followed shortly by the deposition of calcium salts, develops between the two broken ends of the bone. This is called a callus.

Many bone surgeons use the phenomenon of bone stress to accelerate the rate of fracture healing. This is done by use of special mechanical fixation apparatuses for holding the ends of the broken bone together so that the patient can continue to use the bone immediately. This causes stress on the opposed ends of the broken bones, which accelerates osteoblastic activity at the break and often shortens convalescence.