By the end of Second World War Viet Minh controlled the northern half of Vietnam. Viet Minh formed a government led by Ho Chi Minh in Hanoi. This Viet Minh government quickly occupied the southern half of Vietnam. However, the Allied Powers decided at Potsdam that the British in the south and the Chinese in the north should defend Indo-China from the Japanese. But Ho Chi Minh had established his control very firmly and so, early in 1946, the British and Chinese troops had to withdraw, leaving the French and Viet Minh to confront each other. In March the two governments (French and Viet Minh) reached an agreement by which North Vietnam was to be a free state, within an Indo-Chinese Federation.

In 1949 the French attempted to secure the support of the population by declaring Vietnam, Laos and Cambodia independent within the French Union, retaining only foreign affairs and defence under French control.

While the French were receiving considerable financial aid from America, the Viet Minh were helped by the new Chinese communist government. The French troops were eventually defeated. The Geneva Conference (1954) that met on Korea and Indo China decided that Vietnam was to be an independent state but temporarily divided; the Viet Minh to control the north and Bao Dai to head the government the south. Cambodia and Laos were to be independent.

With a population of 16 million North Vietnam became a Communist state with Ho Chi Minh as President. South Vietnam, approximately of the same size and population, was ruled by Ngo Dinh Diem.

The government’s survival in South Vietnam depended on increasing amounts of US support. In 1965 marines landed at Danang naval base, and there were 33,500 US troops in the country within a month. The number increased and there were 210,000 by the end of year. The US bombed both North and South in the hope that it could force the liberation forces to abandon the struggle. The fighters of North Vietnam, trained in guerilla warfare, had grown out of spontaneous struggles against a repressive regime. They sustained their resistance without bowing to the US. The American troops also used bacteriological weapons. Incendiary bombs such as napalm and Agent Orange (to defoliate the forest cover) were used. Vast areas of Vietnam were devastated and hundreds of thousands of people killed. The American forces too suffered heavy casualties. 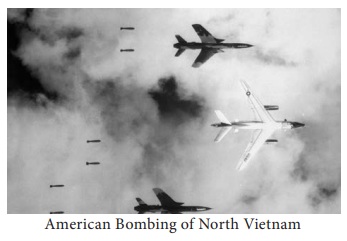 Early in 1975, the war took a decisive turn. The armies of North Vietnam and of the National Liberation Front of South Vietnam swept across the country routing the American supported troops of South Vietnam. By 30 April 1975, all the American troops had withdrawn and the capital of South Vietnam, Saigon, was liberated. North and South Vietnam were formally united as one count in 1976. The city of Saigon was renamed as Ho ChiMinh City after the great leader of the Vietnamese people. 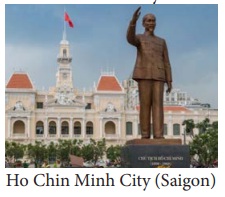 The emergence of Vietnam as a united and independent nation was an historic event. A small country had succeeded in winning independence and unification in the face of the armed opposition of the greatest power in the world. The help given to Vietnam by the socialist countries, the political support extended by a large number of Asian and African countries, and the solidarity expressed by the peoples in all parts of the world, helped in achieving this.