Home | | Social Science 10th Std | Cold War: Rivalry between the US and the Soviet Union

Cold War: Rivalry between the US and the Soviet Union

Cold War: Rivalry between the US and the Soviet Union

In 1948 the Soviets had established socialist governments in the countries of eastern Europe that had been liberated from the Nazis by the Soviet Army. Truman, the president of USA, pursued Truman a policy of containment of communism.

The Soviets were however determined not only to maintain control of eastern Europe, but also keen on spreading Communism world-wide.

Cold War: The rivalry that developed after World War II between the US and the USSR and their respective allies created tension which is referred to as Cold War. They did not take recourse to weapons. Instead they waged war on political, economic and ideological fronts.

The US conceived the Marshall Plan to bring the countries in western Europe under its influence. The plan sought to help the countries of Europe with American dollars to facilitate their early recovery from the destruction caused by the Second World War.

The United States was much concerned that poverty, unemployment, and dislocation caused by the post-World War II period were increasing the appeal of communist parties in western Europe. The Secretary of State, George C. Marshall, advanced the idea of a European self-help programme to be financed by the United States. Sixteen nations, became part of this programme. Administrative and technical assistance was offered through the Economic Cooperation Administration (ECA) of the United States. Marshall Plan funding ended in 1951. 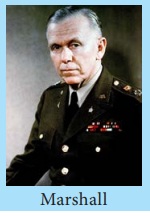