Fall of Berlin Wall and End of Cold War Era

The division of Germany into West (Federal Republic of Germany) and East (German Democratic Republic) led to glaring differences in living standards.

Fall of Berlin Wall and End of Cold War Era

The division of Germany into West (Federal Republic of Germany) and East (German Democratic Republic) led to glaring differences in living standards. West Berlin’s economy became prosperous thanks to the support received from the West under the Marshall Plan. In contrast the USSR had little interest in developing the economy of East Berlin. Further, people in East Berlin suffered from lack of democracy and freedom. Therefore, people of East Berlin moved to West Berlin in large numbers. In West Berlin, on the other hand, there was a fear that the Soviets could use military force to take West Berlin. In this context, East Germany began to construct a wall in 1961 which virtually cut off West Berlin from East Berlin and the surrounding East German areas. It was heavily guarded with watch towers and other lethal impediments to stop people from the East. In the late 1980s, as USSR’s hold over Eastern European countries was weakening, a mass of people assembled on 9 November 1989 on both sides of the wall and began to demolish it. Germany was officially reunited on 3 October 1990. The Berlin Wall was more than just a physical barrier. It was a symbolic boundary between communism and capitalism. With the fall of the Berlin Wall, followed by the collapse of the Soviet Union, the Cold War era came to an end. 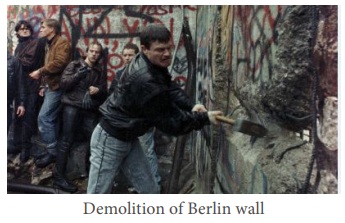 Helmut Kohl, Chancellor of West Germany from 1982 to 1990, and played a crucial role in integrating East Germany into West Germany in 1990. He thus became the first chancellor of a unified Germany after forty five years of division. With French president Mitterand, Kohl was the architect of the Maastricht Treaty, which established the European Union (EU) and the euro currency.

Disintegration of the Soviet Union

In the 1970s and early 1980s the Soviet Union continued to retain a strong and dominant position in international politics. However, its economy was suffering, and was unable to match the productive capacity of the first world. In 1985, Mikhail Gorbachev took over as head of the USSR. Gorbachev spoke about the need for openness (Glasnost) and reform (perestroika). But his commitment to reform, apart from opposition within the ruling communist party, did not match the resources available to USSR. In the middle of the 1980s about one third of the total GDP was going to the military. In order to maintain a parity with the US, in the context of President Reagan’s Star Wars programme, it became necessary for the Soviet Union to allocate more funds to the military. The increase in military budget further strained the Soviet economy.

The year 1988 saw the first mass protests –first in Armenia, and then in the Baltic States. Earlier Soviet regimes had used severe repression to quell such uprisings. Gorbachev could not take recourse to such brutal measures. The Chernobyl Disaster, a major accident in a nuclear plant in Ukraine, in 1986, was another blow. Gorbachev made moves to stabilise his position by reliance on conservative forces in 1989 and 1991. But on each occasion he was interrupted by massive miners’ strike which came close to cripple the country’s energy supplies.

The East European communist states, under the Soviet umbrella, were also in a deep economic and social crisis. Gorbachev’s decision to loosen the Soviet control on the countries of Eastern Europe created an independent, democratic momentum. A series of workers’ strikes undermined the communist regimes first in Poland and then in Hungary. A wave of demonstrations that swept East Germany led to demolition of the Berlin Wall in 1989.

Perestroika (‘restructuring’) refers to the programme introduced by Mikhail Gorbachev in the late 1980s to restructure Soviet economic and political system. Along with the policy of ‘Glasnost’ (‘openness), Perestroika was intended to energize Soviet economy which was lagging behind the developed countries of the capitalist world.

Glasnost (‘openness’) was a policy of ideologically openness introduced by Mikhail Gorbachev along with Perestroika in the 1980s. Under Glasnost there was more openness, writers who had been censored earlier were rehabilitated, and there was space for criticism of politics and government.

Subsequent to it, regimes in Czechoslovakia, followed by Bulgaria, fell. An attempt by Romania’s Nicolae Ceaușescu to resist the wave of change by shooting down demonstrators ended in his execution by a firing squad (December 1989) under the command of his own generals. The televised images of the shooting and the fall of the Berlin Wall galvanized the process of the breaking up of the communist world. In six months the political map of half of Europe had been redrawn.

Yeltsin was first an ally of Gorbachev. However, as Mayor of Moscow, Yeltsin won great popularity as a champion of political and economic freedom. With Gorbachev’s introduction of democratic elections for the Soviet parliament, Yeltsin was returned to power with overwhelming support of a Moscow constituency in 1989. The following year he was elected President of Russia over Gorbachev’s objections. President Yeltsin advocated greater autonomy of the Republic, with executive presidential system that would allow him to govern independently of parliament. 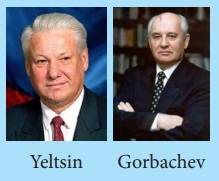 Gorbachev made a last attempt to take a hard line against the disruptionist only to be challenged by a second great miners’ strike in 1991and huge demonstrations in Moscow. In response, conservative forces in his government attempted to take a hard line without Gorbachev. They used troops in Moscow to stage a coup, and held Gorbachev under house arrest. But other military units refused to back them and as a result power fell into the hands of Boris Yeltsin, a reformer backed by the West.

In the meantime, three Baltic States had formally left the Soviet Union. They were admitted to the U.N. as independent countries: Estonia, Latvia, and Lithuania. In November 1991 eleven republics (Ukraine, Georgia, Belarus, Armenia, Azerbaijan, Kazakhstan, Kyrgyzstan, Moldova, Turkmenistan, Tajikistan and Uzbekistan) announced secession from the Soviet Union. Instead, they declared they would establish a Commonwealth of Independent States. On 25 December Gorbachev announced his resignation. For six days the Soviet Union continued to exist only in name and at midnight on 31 December 1991, it was formally dissolved. The USSR was no more.