The Treaty of Versailles (1919) had provided for mandates in Turkish Arab Empire. France was given the mandate for Syria and Lebanon, and Britain for Iraq, Palestine and Jordan.

The Treaty of Versailles (1919) had provided for mandates in Turkish Arab Empire. France was given the mandate for Syria and Lebanon, and Britain for Iraq, Palestine and Jordan. This arrangement upset the Arabs since they had expected independence at the end of World War I. Britain’s promise to Zionist leaders that it would allocate one of the Arab lands, Palestine, to Jewish settlers from Europe further embittered the Arabs. There was growing Arab antagonism towards Zionist settlers, as they bought land from rich Arabs and evicted the local peasant families who had been cultivating it for centuries.

At the end of October 1945, the Jewish underground organizations like Irgun Zvai Leumi (Zionist Para-military Organization) and the Stern Gang (Zionist Terrorist Organization) began to launch terror attacks on a large scale. Railways, bridges, airfields and government offices were blown up. The British government, presented the dispute to the UN for a decision.

Succumbing to the pressure of great powers, the UN resolved to partition the British mandate of Palestine into a Jewish state and an Arab state (29 November 1947). Clashes broke out almost immediately between Jews and Arabs in Palestine.

Zionist Movement: In Palestine, the ancient home of Jews, only a few thousand Jews were living in 1900. Some 15 million were scattered around Europe and North America. (This is referred to as the Diaspora.) In 1896 Thodore Herzel, a Viennese journalist, published a pamphlet called The Jewish State in which he called for the creation of a Jewish national home. Next year (1897) the World Zionist Organisation was founded.

The Israelis, won control of the main road to Jerusalem and successfully repulsed repeated Arab attacks. As a result of separate armistice agreements (1947 Feb-June) between Israel and each of the Arab states, a temporary frontier was fixed between Israel and its neighbours. In Israel, the war is remembered as its War of Independence. In the Arab world, it is treated as the Nakbah (“Catastrophe”) as a large number of Arabs became refugees. Israel was admitted into the UN immediately much against the wishes of Arabs.

In Egypt, in a coup in 1952, Colonel Nasser became its President. In 1956 he nationalized the Suez Canal, which undermined British interests. With the failure of diplomacy, Britain and France decided to use force. Israel saw this as an opportunity to open the Gulf of Aqaba to Israeli shipping and put a stop to Egyptian border raids. On 29 October Israeli forces invaded Egypt. Britain used this opportunity to demand that its troops be allowed to occupy the canal zone to protect the canal. Egypt refused and on 31 October Britain and France bombed Egyptian airfields and other installations as well as the Suez Canal area. However, under pressure of world opinion, Britain and France ended hostilities on 6 November. India represented by Nehru played a crucial role in resolving the crisis. 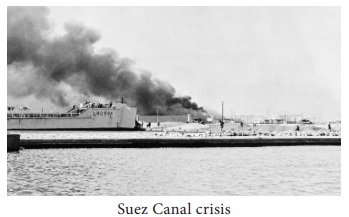 Ever since the formation of the Palestinian Liberation Organization (PLO), Israel came to be attacked frequently by Palestinian guerrilla groups based in Syria, Lebanon and Jordan. Israeli resorted to violent reprisals. In November 1966 an Israeli strike on the village of Al-Samū in the Jordanian West Bank, left 18 dead and 54 wounded. Israel’s air battle with Syria in April 1967 ended in the shooting down six Syrian MiG fighter jets. In his bid to demonstrate Egypt’s support for Syria Nasser mobilized Egyptian forces in the Sinai, seeking the removal of UN emergency forces stationed there on May 18. On May 22 he closed the Gulf of Aqaba to Israeli shipping. King Hussein of Jordan signed a mutual defence pact with Egypt. Accordingly, it was decided to place Jordanian forces under Egyptian command. Soon, Iraq too joined the alliance.

Palestine Liberation Organization (PLO)-It is an umbrella political organization representing the world’s Palestinians – all Arabs and their descendants who lived in mandated Palestine before the creation of the State of Israel in 1948. It was formed in 1964 to federate various Palestinian groups that previously had operated as clandestine resistance movements. Yasser Arafat was its most prominent leader.

Following the mobilization of Arab states by Nasser, on June 5, Israel staged a sudden pre-emptive air strike that destroyed more than 90 percent of Egypt’s air force on the tarmac. A similar air assault incapacitated the Syrian air force. Within three days the Israelis had achieved an overwhelming victory on the ground, capturing the Gaza Strip and all of the Sinai Peninsula up to the east bank of the Suez Canal.

In 1969, Yasser Arafat became chairman of the PLO’s executive committee a position he held until his death in 2004. Yasser Arafat was appointed commander- in-chief of the all Palestinian Arab guerilla forces in September 1970. Wearing a disguised pistol and carrying an olive branch and dressed in a military uniform, his appearance raised world awareness of the Palestinian cause. Arafat was elected by the central council of the PLO as the first president of the state of Palestine on April 2, 1989.

Egypt and Syria under Presidents Anwar Sadat and Hafez al-Assad respectively concluded a secret agreement in January 1973 to bring their armies under one command. Sadat offered the Israelis a peace deal, if they withdrew from Sinai. Israel rejected the offer. Egypt and Syria launched a sudden and surprise attack on the Yom Kippur religious holiday (6 October 1973). Though Israel suffered heavy casualties it finally pushed back the Arab forces. Arabs gained nothing out of this war too. By way of mediation the USsucceeded in asserting its hegemony over the region and its oil. 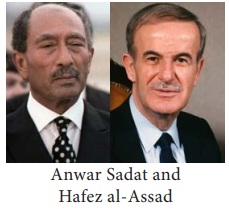