(a) China in the Pre-War Period

In its long history, Chinese civilization was more advanced than that of Europe. But by the end of the nineteenth century, its progress had halted. The Manchus, the ruling dynasty, had governed China since about 1650. The entire administration system was in the hands of a bureaucracy of scholar-officials called mandarins who came from the landed gentry. The mass of peasant population was poverty-stricken, and suffered from high rents, high taxes, and shortage of land. There was very little industry, though some railways and engineering works had been built.

Discontent with the political and economic system resulted in a number of peasant uprisings. The Taiping Rebellion (1850–64) was a major rebellion. In the two opium wars of 1832 and 1848, China was defeated and was compelled to open its ports to western powers. The opening of China to western imperialism led to economic exploitation and the impoverishment of the Chinese people.

The European presence produced a profound hatred of foreigners. This combined with military defeat, led to more pressing demands for reforms from the Western-educated intellectuals. In 1898, the young Emperor, initiated a series of reforms known as the Hundred Days of Reform. But these reforms aroused tremendous opposition from the powerful conservatives and the Dowager-Empress Tzú Hsi. She imprisoned the Emperor and reversed the reforms.

The disintegration of the Manchu dynasty began with the death of the Dowager-Empress in 1908. The new emperor was two-years old and the provincial governors began to assert their independence. In October 1911 the local army mutinied and the revolt spread. Provincial governors removed the Manchu garrisons and proclaimed their independence. Already there were a few middle-class leaders. Dr. Sun Yat-sen was one among them. On hearing the news of the rising in a newspaper in the United States Sun Yat-sen arrived in Shanghai and was immediately elected provisional president of the new Chinese Republic.

Born in a poor family near Canton, Dr. Sun Yat-sen, the father of modern china was educated in a mission school and became a Christian. He was then trained as a doctor of medicine in Hong Kong. Evincing interest in politics he took part in a rising against the Manchus in 1895. In 1905 he founded in Tokyo the political party which in 1912 became the Kuomintang or the National People’s Party. Dr. Sun Yat-sen’s three principles were Nationalism, Democracy, and People’s livelihood with Socialism as the ultimate object.

(c) Yuan Shih-kai and After

The unity of China under Yuan Shih-kai lasted for four years. On his death in 1916 a new President was appointed for the next twelve years but the government was central only in name.

With the Revolution and the breakup of the old society, Confucian thought was generally side-lined and after the Russian Revolution of 1917, the ideas of Marx and Lenin became popular among intellectuals. In 1918 a Society for the Study of Marxism was formed in Peking University. Among the students who attended was Mao Tse-tung.

Mao was born in Hunan in south-east China. His father was a wealthy peasant, and a firm supporter of the Manchus.

Mao, who was very fond of reading, soon showed his ability and entered the Junior College at Changsha. This was the year (1911) when the Revolution had broken out in China. Mao joined the revolutionary army but soon left and enrolled in the Teachers’ Training College in Changsha. In the following year Mao began his full-fledged political activities of Hunan and emerged as a staunch Communist.

After the death of Sun Yat Sen the leader of the Kuomintang was Chiang Kai-shek. While the Communist Party was under Mao Tse Tung and Chou En Lai. As an avowed critic of Communists, Chiang removed all of them from important positions in the party. The communists increased their influence among the workers and peasants and obtained recruits for their army. The Kuomintang represented the interests of the landlords and capitalists.

In 1928 he was successful in capturing Peking. Once again there was a central government in China.

Mao as Organizer of Peasants

Mao had understood that the Kuomintang grip on the towns was very strong. So he concentrated his energies on organizing the peasantry. A few hundred Communists led by Mao retreated into the wild mountains. Here they stayed for the next seven years. As the army of Mao was gradually growing, the Kuomintang was unable to penetrate the mountains. The campaign against the communists was distracted as Chiang Kai-shek had to deal with the constant threat from Japan and also the attacks from war lords.

As Chiang Kai-shek had built a circle of fortified posts around the communist positions, Mao wanted to move out of Hunan for safer territory. By 1933 Mao had gained full control of the Chinese Communist party. In 1934, the Communist army of about 100,000 set out on the Long March. This march has become legendary. Of the 100000 who set out, only 20,000 finally reached northern Sheni late in 1935, after crossing nearly 6000 miles. They were soon joined by other communist armies. By 1937 Mao had become the leader of over 10 million people. 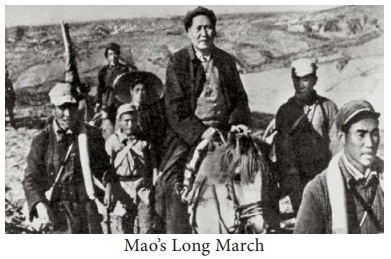 Japan continued to occupy north Chinese provinces while developing Manchuria as a military base. Mao believed that Chiang Kai-shek was necessary for some time to hold together Kuomintang to fight the Japanese. As a consequence of this pragmatic policy, the attacks on the communists gradually stopped.

With the surrender of the Japanese (1945), both the Kuomintang and the communists sought to occupy the Japanese areas. In this race the Kuomintang was successful. The cities and railways soon fell into their hands. Even the area around Peking was soon controlled by Chiang Kai-shek’s forces, largely because of the military aid given by the USA.

With the massive support provided by the USA Kuomintang government controlled the administration, ports and communication system. But the soldiers, mainly drawn from the peasants, were disillusioned and discontented. Mao was keen on obtaining the support of the middle class. So he declared that what the communists wanted was the rule of the people, not the dictatorship of the proletariat; the end of exploitation, not absolute equality.

In September 1949, before fighting had ended in the south of China, the people’s Political Consultative Conference met in Peking. Consisting of over 650 delegates from the Communist Party and other left-wing organizations, the conference elected the Central Governing Council with Mao as its Chairman.

The United-States refused to recognize the People’s Republic of China for more than two decades.