Using a One Hot State Assignment

When designing with PGAS4, we should keep in mind that each logic cell contains two flip flops.

USING A ONE HOT STATE ASSIGNMENT

The one hot assignment uses one flip flop for each state, so a state machine with N states requires N flip flop. Exactly one flip flop is set to l in each state. For example a system with four (To T1, T2 and T3) could use four flip flop (O0, Q1, Q2 and Q3) with the following state assignment.

The other 12 combinations are not used.

We can write next state and output equations by inspection of the graph or by tracking link parts on an SM chart consider the partial state graph . The next state equation for flip flop Q3 could be written as.

However since Q=1 implies Q1=Q2=Q3=0 the Q1=Q2=Q3 term is redundant and can be eliminated, similarly, all the primed state variables can be eliminated from the other terms, so the next state equation reduces to. 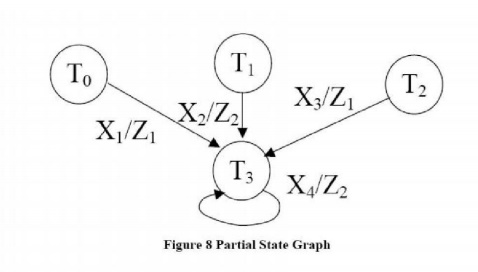 And the modified equations are:

In general, both an assignment with a minimum number of state variables and a one hot assignment should be tried to see which one leads to a design with the smallest number of logic cells. Alternatively, if speed of operation is important, the design that leads to the fastest logic should be chosen. When a one hot assignment is used, more next state equations are required, but in general both the next state and output equation will contain fewer variables. An equation with fewer variable generally requires fewer logic cells to realize. Equations with five or fewer variables require a single cell. As seen in figure, an equation with six variables require cascading two cells, an equation with seven variables may require cascading three cells etc. The more cells cascaded, the longer the propagation delay, and the slower the operation.

STAT ASSIGNMENT RULES:  A set of heuristic rules that attempts to reduce the cost of the combinational logic in a finite state machine. 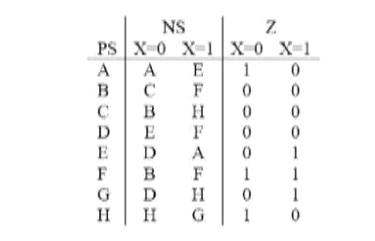 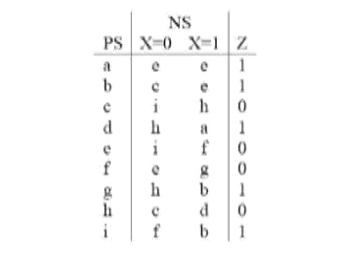 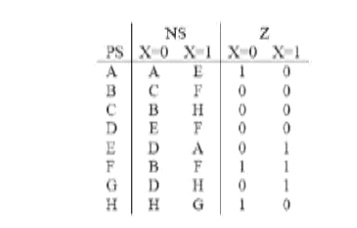 4.   Implement the following state using D flip flop and gates. Use a one hot assignment and write down the logic equations by inspecting the state table. Let S0=001, S1=010, and S2=1000.