In the case of PROMs, instead of being done at the manufacturer‘s premises during the manufacturing process, the programming is done by the customer with the help of a special gadget called a PROM programmer.

In the case of PROMs, instead of being done at the manufacturer‘s premises during the manufacturing process, the programming is done by the customer with the help of a special gadget called a PROM programmer. Since the data, once programmed, cannot be erased and reprogrammed, these devices are also referred to as one-time programmable ROMs. The basic memory cell of a PROM is similar to that of a mask-programmed ROM. Above show a MOSFET-based memory cell and bipolar memory cell respectively. In the case of a PROM, each of the connections that were left either intact or open in the case of a mask-programmed ROM are made with a thin fusible link, as shown in Fig. 15.18. The different interconnect technologies used in programmable logic devices are comprehensively covered in Chapter 9. Basic fuse technologies used in PROMs are metal links, silicon links and PN junctions. These fusible links can be selectively blown off to store desired data. A sufficient current is injected through the fusible link to burn it open to store ‘0‘. The programming operation, as said earlier, is done with a PROM programmer. The PROM chip is plugged into the socket meant for the purpose. The programmer circuitry selects each address of the PROM one by one, burns in the required data and then verifies the correctness of the data before proceeding to the next address. The data are fed to the programmer from a keyboard or a disk drive or from a computer. PROM chips are available in various word sizes and capacities. 27LS19, 27S21, 28L22, 27S15, 24S41, 27S35, 24S81, 27S45, 27S43 and 27S49 are respectively 32× 8, 256× 4, 256× 8, 512× 8, 1K× 4, 1K× 8, 2K× 4, 2K× 8, 4K× 8 and 8K× 8 PROMS. The typical access time in the case of these devices is in the range 50–70 ns. MOS PROMs are available with much greater capacities than bipolar PROMs. Also, the power dissipation is much lower in MOS PROMs than it is in the case of bipolar PROMs with similar capacities 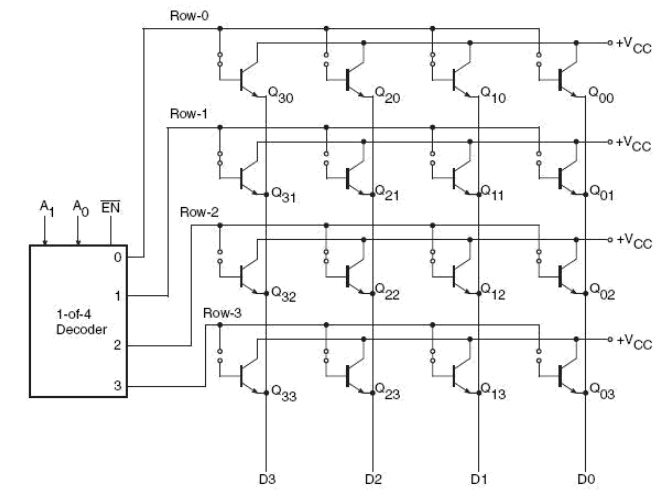 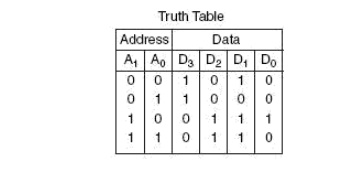