In the case of a mask-programmed ROM, the ROM is programmed at the manufacturer‘s site according to the specifications of the customer.

In the case of a mask-programmed ROM, the ROM is programmed at the manufacturer‘s site according to the specifications of the customer. A photographic negative, called a mask, is used to store the required data on the ROM chip. A different mask would be needed for storing each different set 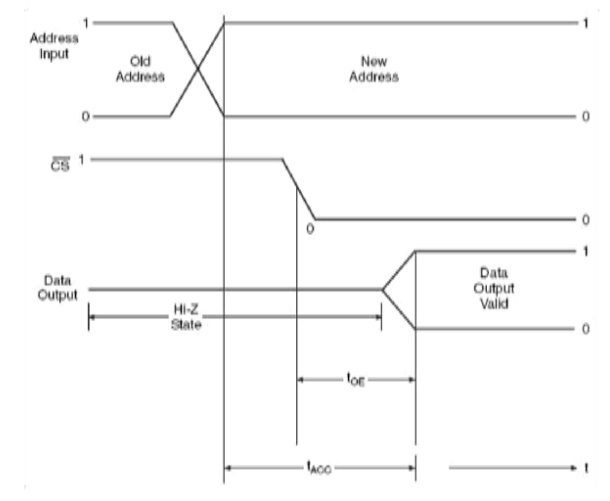 Typical timing diagram a ROM read operation of information. As preparation of a mask is an expensive proposition, mask-programmed ROM is economical only when manufactured in large quantities. The limitation of such a ROM is that, once programmed, it cannot be reprogrammed. The basic storage element is an NPN bipolar transistor, connected in common-collector configuration, or a MOSFET in common drain configuration. Figures 15.16(a) and (b) show a MOSFET-based basic cell connection when storing a ‘1‘ and ‘0‘ respectively. As is clear from the figure, the connection of the ‘row line‘ to the gate of the MOSFET stores ‘1‘ at the location when the ‘row line‘ is set to level ‘1‘. A floating-gate connection is used to store ‘0‘. The data programmed into the ROM are given in the adjoining truth table. The transistors with an open base store a ‘0‘, whereas those with their bases connected to the corresponding decoder output store a ‘1‘. As an illustration, transistors Q30, Q20, Q10 and Q00 in row 0 store ‘1‘, ‘0‘, ‘1‘ and ‘0‘ respectively. The stored information in a given row is available at the output when the corresponding decoder is enabled, and that ‘row line‘ is set to level ‘1‘. The output of the memory cells appears at the column lines. For example, when the address input is ‘11‘, row 3 is enabled and the data item at the output is 0110.

In the ROM architecture shown in Fig. 15.17, the number of memory cells in a row represents the word size. The four memory cells in a row here constitute a four-bit register. There are four such registers in this ROM. In a 16× 8 ROM of this type there will be 16 rows of such transistor cells, with each row having eight memory cells. The decoder in that case would be a 1-of-16 decoder.