A circuit for implementing one or more switching functions of several variables was described in the preceding section and illustrated in Figure.

A circuit for implementing one or more switching functions of several variables was described in the preceding section and illustrated in Figure . The components of the circuit are

• One or more OR gates, whose outputs are the circuit outputs

• An interconnection network between decoder outputs and OR gate inputs

The decoder is an MSI circuit, consisting of 2n n-input AND gates, that produces all the minterms of n variables. It achieves some economy of implementation, because the same decoder can be used for any application involving the same number of variables.What is special to any application is the number of OR gates and the specific outputs of the decoder that become inputs to those OR gates. Whatever else can be done to result in a general-purpose circuit would be most welcome. The most general-purpose approach is to include the maximum number of OR gates, with provision to interconnect all 2n outputs of the decoder with the inputs to every one of the OR gates. Then, for any given application, two things would have to be done:

•            The number of OR gates used would be fewer than the maximum number, the others remaining unused.

•            Not every decoder output would be connected to all OR gate inputs.This scheme would be terribly wasteful and doesn‘t sound like a good idea. Instead, suppose a smaller number, m, is selected for the number of OR gates to be included, and an interconnection network is set up to interconnect the 2n decoder outputs to the m OR gate inputs. Such a structure is illustrated in Figure 21. It is an LSI combinational circuit with n inputs and m outputs that, for reasons that will become clear shortly, is called a read-only memory (ROM).

A ROM consists of two parts:

Once made, the connections in the memory array are permanent.8 So this memory is not one whose contents can be changed readily from time to time; we ―write‖ into this memory but once. However, it is possible to ―read‖ the information already stored (the connections actually made) as often as desired, by applying input words and observing the output words.That‘s why the circuit is called read-only memory. Before you continue reading, think of two possible ways in which to fabricate a ROM so that one set of connections can be made and another set left unconnected.

Continue reading after you have thought about it. 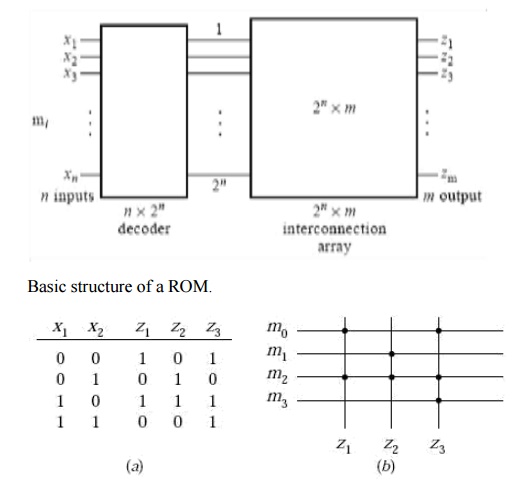 A ROM truth table and its program.