1. What is the difference between synchronous and asynchronous circuit? 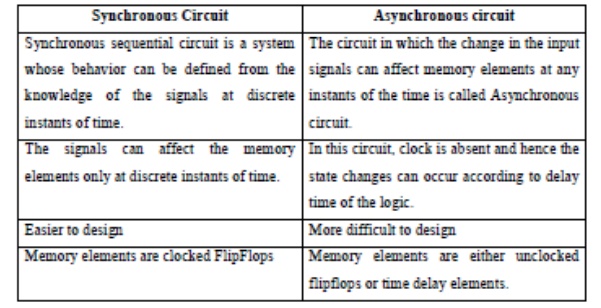 2. What are the different modes of operation in asynchronous sequential circuits?

The different modes of operation are fundamental mode and sequential mode circuits.

3. Why are asynchronous counters referred to as ripple counters?

Counter circuits made from cascaded J-K flip-flops where each clock input receives its pulses from the output of the previous flip-flop invariably exhibit a ripple effect, where false output counts are generated between some steps of the count sequence. These types of counter circuits are called asynchronous counters, or ripple counters.

6. When does race condition arise in an asynchronous sequential circuit?

Race condition (race) is a condition in sequential circuits in which two or more variables change at one time. In practice, i.e. with non ideal circuits, there is a possibility of incorrect operation under such a condition.

If an input change induces a feedback transitions through more than one unstable state, then such a situation is called a cycle.

Hazard is the unwanted transient i.e.. Spike or glitch that occurs due to unequal propagation delays through a combination circuit.

The time sequence of input, output and FF states can be enumerated in a state table it is also called as transition table. The table has four section present states, input, next state and output.

11. What is an asynchronous sequential circuit?

If a circuit is not controlled by a clock the transition of one state to next state occur whenever there is a change in the input to the circuit at any time and hence this circuit is called asynchronous sequential circuit.

In a combinational network, which has several logic gates and several paths from input to output, an input to the network produces an output. In practice different paths through the network from input terminal to output terminal may have different propagation delays. When the input changes, it may so happen that undesirable switching transients may appear at the output. If the network is a part of a larger asynchronous sequential network, switching transients may cause malfunctioning of the system. At this condition hazard will occur.

The unwanted switching transients that may appear at the output of a circuit are called glitch or Hazards.

Static hazard is a condition, which result in a single momentary incorrect output due

to change is a single input variable when the output is expected to remain in the same state.

15.   What is the cause for essential hazard?

Operational error generally caused by an excessive delay to a Feedback variable in response to an input change, leading to a transition to an improper state. For example, an excessive delay through an inverter circuit in comparison to the delay associated with the feedback path may cause essential hazard.