The rates at which different substances are excreted in the urine represent the sum of three renal processes. 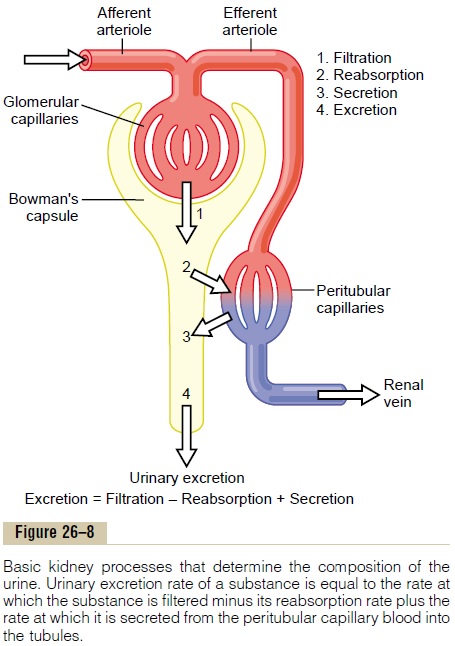 Urine formation begins when a large amount of fluid that is virtually free of protein is filtered from the glomerular capillaries into Bowman’s capsule. Most substances in the plasma, except for proteins, are freely filtered, so that their concentration in the glomerular filtrate in Bowman’s capsule is almost the same as in the plasma. As filtered fluid leaves Bowman’s capsule and passes through the tubules, it is modified by reab-sorption of water and specific solutes back into the blood or by secretion of other substances from the peritubular capillaries into the tubules. 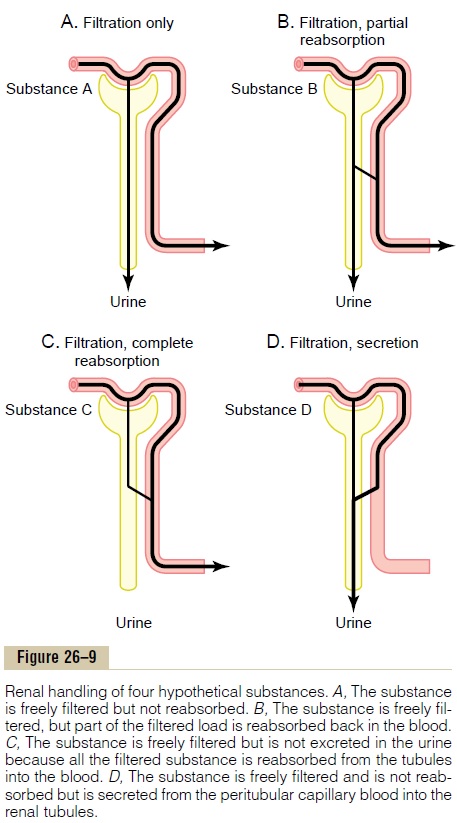 Figure 26–9 shows the renal handling of four hypo-thetical substances. The substance shown in panel A is freely filtered by the glomerular capillaries but is neither reabsorbed nor secreted. Therefore, its excre-tion rate is equal to the rate at which it was filtered. Certain waste products in the body, such as creatinine, are handled by the kidneys in this manner, allowing excretion of essentially all that is filtered.

In panel B, the substance is freely filtered but is also partly reabsorbed from the tubules back into the blood. Therefore, the rate of urinary excretion is less than the rate of filtration at the glomerular capillaries. In this case, the excretion rate is calculated as the fil-tration rate minus the reabsorption rate. This is typical for many of the electrolytes of the body.

In panel C, the substance is freely filtered at the glomerular capillaries but is not excreted into the urine because all the filtered substance is reabsorbed from the tubules back into the blood. This pattern occurs for some of the nutritional substances in the blood, such as amino acids and glucose, allowing them to be conserved in the body fluids.

The substance in panel D is freely filtered at the glomerular capillaries and is not reabsorbed, but addi-tional quantities of this substance are secreted from the peritubular capillary blood into the renal tubules. This pattern often occurs for organic acids and bases, permitting them to be rapidly cleared from the blood and excreted in large amounts in the urine. The excre-tion rate in this case is calculated as filtration rate plus tubular secretion rate.

For each substance in the plasma, a particular com-bination of filtration, reabsorption, and secretion occurs. The rate at which the substance is excreted in the urine depends on the relative rates of these three basic renal processes.

In general, tubular reabsorption is quantitatively more important than tubular secretion in the formation of urine, but secretion plays an important role in deter-mining the amounts of potassium and hydrogen ions and a few other substances that are excreted in the urine. Most substances that must be cleared from the blood, especially the end products of metabolism such as urea, creatinine, uric acid, and urates, are poorly reabsorbed and are therefore excreted in large amounts in the urine. Certain foreign substances and drugs are also poorly reabsorbed but, in addition, are secreted from the blood into the tubules, so that their excretion rates are high. Conversely, electrolytes, such as sodium ions, chloride ions, and bicarbonate ions, are highly reabsorbed, so that only small amounts appear in the urine. Certain nutritional substances, such as amino acids and glucose, are completely reabsorbed from the tubules and do not appear in the urine even though large amounts are filtered by the glomerular capillaries.

Each of the processes—glomerular filtration, tubular reabsorption, and tubular secretion—is regu-lated according to the needs of the body. For example, when there is excess sodium in the body, the rate at which sodium is filtered increases and a smaller frac-tion of the filtered sodium is reabsorbed, resulting in increased urinary excretion of sodium.

Why Are Large Amounts of Solutes Filtered and Then Reab-sorbed by the Kidneys? One might question the wisdomof filtering such large amounts of water and solutes and then reabsorbing most of these substances. One advantage of a high GFR is that it allows the kidneys to rapidly remove waste products from the body that depend primarily on glomerular filtration for their excretion. Most waste products are poorly reabsorbed by the tubules and, therefore, depend on a high GFR for effective removal from the body.

A second advantage of a high GFR is that it allows all the body fluids to be filtered and processed by the kidney many times each day. Because the entire plasma volume is only about 3 liters, whereas the GFR is about 180 L/day, the entire plasma can be filtered and processed about 60 times each day. This high GFR allows the kidneys to precisely and rapidly control the volume and composition of the body fluids.