Feedback mechanisms intrinsic to the kidneys normally keep the renal blood flow and GFR relatively constant, despite marked changes in arterial blood pressure. These mechanisms still function in blood-perfused kidneys that have been removed from the body, independent of systemic influences. This relative constancy of GFR and renal blood flow is referred to as autoregulation (Figure 26–16). 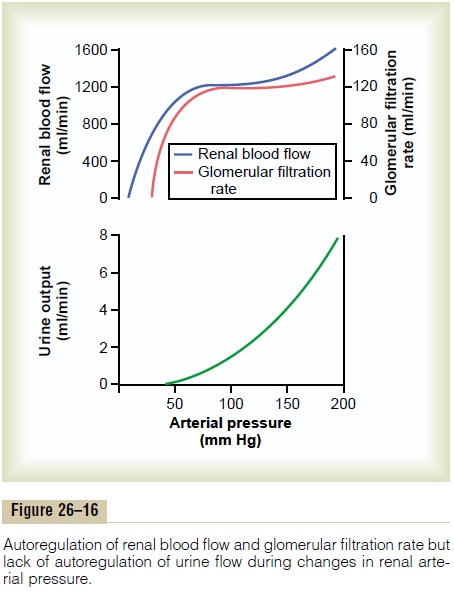 The primary function of blood flow autoregulation in most tissues other than the kidneys is to maintain the delivery of oxygen and nutrients at a normal level and to remove the waste products of metabolism, despite changes in the arterial pressure. In the kidneys, the normal blood flow is much higher than that required for these functions. The major function of autoregulation in the kidneys is to maintain a rela-tively constant GFR and to allow precise control of renal excretion of water and solutes.

The GFR normally remains autoregulated (that is, remains relatively constant), despite considerable arterial pressure fluctuations that occur during a person’s usual activities. For instance, a decrease in arterial pressure to as low as 75 mm Hg or an increase to as high as 160 mm Hg changes GFR only a few percentage points. In general, renal blood flow is auto-regulated in parallel with GFR, but GFR is more effi-ciently autoregulated under certain conditions.

Normally, GFR is about 180 L/day and tubular reab-sorption is 178.5 L/day, leaving 1.5 L/day of fluid to be excreted in the urine. In the absence of autoregulation, a relatively small increase in blood pressure (from 100 to 125 mm Hg) would cause a similar 25 per cent increase in GFR (from about 180 to 225 L/day). If tubular reabsorption remained constant at 178.5 L/ day, this would increase the urine flow to 46.5 L/day (the difference between GFR and tubular reabsorp-tion)—a total increase in urine of more than 30-fold. Because the total plasma volume is only about 3 liters, such a change would quickly deplete the blood volume.

But in reality, such a change in arterial pressure exerts much less of an effect on urine volume for two reasons: (1) renal autoregulation prevents large changes in GFR that would otherwise occur, and (2) there are additional adaptive mechanisms in the renal tubules that allow them to increase their reabsorption rate when GFR rises, a phenomenon referred to as glomerulotubular balance.

Even with these special control mechanisms, changes in arterial pressure still have significant effects on renal excretion of water and sodium; this is referred to as pressure diuresis or pressure natriuresis, and it is crucial in the regulation of body fluid volumes and arterial pressure.

Role of Tubuloglomerular Feedback in Autoregulation of GFR

To perform the function of autoregulation, the kidneys have a feedback mechanism that links changes in sodium chloride concentration at the macula densa with the control of renal arteriolar resistance. This feedback helps ensure a relatively constant delivery of sodium chloride to the distal tubule and helps prevent spurious fluctuations in renal excretion that would otherwise occur. In many circumstances, this feedback autoregulates renal blood flow and GFR in parallel. However, because this mechanism is specifically directed toward stabilizing sodium chloride delivery to the distal tubule, there are instances when GFR is autoregulated at the expense of changes in renal blood flow, as discussed later. 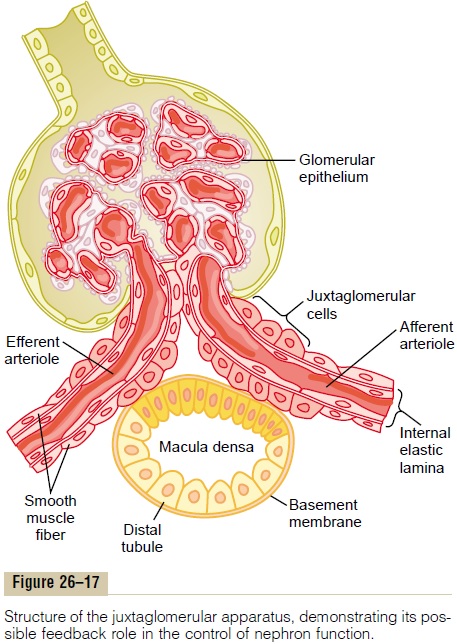 The juxtaglomerular complex consists of maculadensa cells in the initial portion of the distal tubule and juxtaglomerular cells in the walls of the afferent andefferent arterioles. The macula densa is a specialized group of epithelial cells in the distal tubules that comes in close contact with the afferent and efferent arteri-oles. The macula densa cells contain Golgi apparatus, which are intracellular secretory organelles directed toward the arterioles, suggesting that these cells may be secreting a substance toward the arterioles. 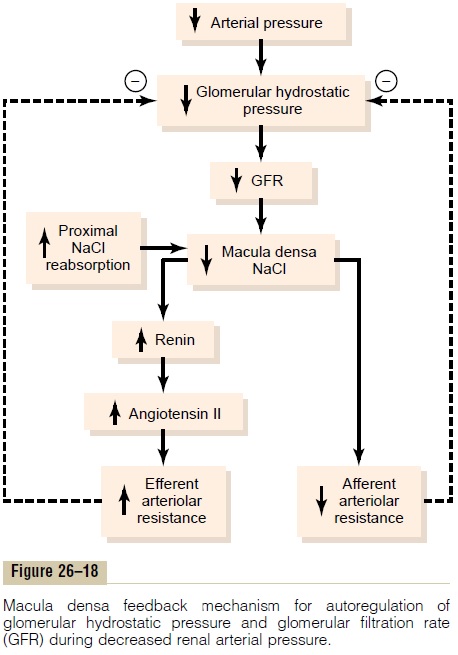 decreased GFR slows the flow rate in the loop of Henle, causing increased reabsorption of sodium and chloride ions in the ascending loop of Henle, thereby reducing the concentration of sodium chloride at the macula densa cells. This decrease in sodium chloride concentration initiates a signal from the macula densa that has two effects (Figure 26–18): (1) it decreases resistance to blood flow in the afferent arterioles, which raises glomerular hydrostatic pressure and helps return GFR toward normal, and (2) it increases renin release from the juxtaglomerular cells of the afferent and efferent arterioles, which are the major storage sites for renin. Renin released from these cells then functions as an enzyme to increase the formation of angiotensin I, which is converted to angiotensin II. Finally, the angiotensin II constricts the efferent arte-rioles, thereby increasing glomerular hydrostatic pres-sure and returning GFR toward normal.

These two components of the tubuloglomerular feedback mechanism, operating together by way of the special anatomical structure of the juxtaglomerular apparatus, provide feedback signals to both the affer-ent and the efferent arterioles for efficient autoregu-lation of GFR during changes in arterial pressure. When both of these mechanisms are functioning together, the GFR changes only a few percentage points, even with large fluctuations in arterial pressure between the limits of 75 and 160 mm Hg.

Blockade of Angiotensin II Formation Further Reduces GFR During Renal Hypoperfusion. As discussed earlier, a preferentialconstrictor action of angiotensin II on efferent arteri-oles helps prevent serious reductions in glomerular hydrostatic pressure and GFR when renal perfusion pressure falls below normal. The administration of drugs that block the formation of angiotensin II (angiotensin-converting enzyme inhibitors) or that block the action of angiotensin II (angiotensin II antag-onists) causes greater reductions in GFR than usual when the renal arterial pressure falls below normal. Therefore, an important complication of using these drugs to treat patients who have hypertension because of renal artery stenosis (partial blockage of the renal artery) is a severe decrease in GFR that can, in some cases, cause acute renal failure. Nevertheless, angiotensin II–blocking drugs can be useful therapeutic agents in many patients with hypertension, congestive heart failure, and other conditions, as long as they are monitored to ensure that severe decreases in GFR do not occur.

Another mechanism that contributes to the main-tenance of a relatively constant renal blood flow and GFR is the ability of individual blood vessels to resist stretching during increased arterial pressure, a phenomenon referred to as the myogenic mechanism. Studies of individual blood vessels (especially small arterioles) throughout the body have shown that they respond to increased wall tension or wall stretch by contraction of the vascular smooth muscle. Stretch of the vascular wall allows increased movement of calcium ions from the extracellular fluid into the cells, causing them to contract through the mechanisms. This contraction prevents overdis-tention of the vessel and at the same time, by raising vascular resistance, helps prevent excessive increases in renal blood flow and GFR when arterial pressure increases.

Although the myogenic mechanism probably oper-ates in most arterioles throughout the body, its impor-tance in renal blood flow and GFR autoregulation has been questioned by some physiologists because this pressure-sensitive mechanism has no means of directly detecting changes in renal blood flow or GFR per se.

The exact mechanisms by which this occurs are still not completely understood, but one possible explana-tion is the following: A high-protein meal increases the release of amino acids into the blood, which are reab-sorbed in the proximal tubule. Because amino acids and sodium are reabsorbed together by the proximal tubules, increased amino acid reabsorption also stimu-lates sodium reabsorption in the proximal tubules. This decreases sodium delivery to the macula densa, which elicits a tubuloglomerular feedback–mediated decrease in resistance of the afferent arterioles, as discussed earlier. The decreased afferent arteriolar resistance then raises renal blood flow and GFR. This increased GFR allows sodium excretion to be maintained at a nearly normal level while increasing the excretion of the waste products of protein metabolism, such as urea.

A similar mechanism may also explain the marked increases in renal blood flow and GFR that occur with large increases in blood glucose levels in uncontrolled diabetes mellitus. Because glucose, like some of theamino acids, is also reabsorbed along with sodium in the proximal tubule, increased glucose delivery to the tubules causes them to reabsorb excess sodium along with glucose. This, in turn, decreases delivery of sodium chloride to the macula densa, activating a tubu-loglomerular feedback–mediated dilation of the affer-ent arterioles and subsequent increases in renal blood flow and GFR.

These examples demonstrate that renal blood flow and GFR per se are not the primary variables controlled by the tubuloglomerular feedback mechanism. The main purpose of this feedback is to ensure a constant delivery of sodium chloride to the distal tubule, where final processing of the urine takes place. Thus, distur-bances that tend to increase reabsorption of sodium chloride at tubular sites before the macula densa tend to elicit increased renal blood flow and GFR, which helps return distal sodium chloride delivery toward normal so that normal rates of sodium and water excre-tion can be maintained (see Figure 26–18).

An opposite sequence of events occurs when proximal tubular reabsorption is reduced. For example, when the proximal tubules are damaged (which can occur as a result of poisoning by heavy metals, such as mercury, or large doses of drugs, such as tetracyclines), their ability to reabsorb sodium chloride is decreased. As a consequence, large amounts of sodium chloride are delivered to the distal tubule and, without appropriate compensations, would quickly cause excessive volume depletion. One of the important compensatory responses appears to be a tubuloglomerular feed-back–mediated renal vasoconstriction that occurs in response to the increased sodium chloride delivery to the macula densa in these circumstances. These exam-ples again demonstrate the importance of this feedback mechanism in ensuring that the distal tubule receives the proper rate of delivery of sodium chloride, other tubular fluid solutes, and tubular fluid volume so that appropriate amounts of these substances are excreted in the urine.