Multiple Functions of the Kidneys in Homeostasis

Most people are familiar with one important function of the kidneys—to rid the body of waste mate-rials that are either ingested or produced by metabolism.

Multiple Functions of the Kidneys in Homeostasis

Most people are familiar with one important function of the kidneys—to rid the body of waste mate-rials that are either ingested or produced by metabolism. A second function that is especially critical is to control the volume and composition of the body fluids. For water and virtually all electrolytes in the body, the balance between intake (due to ingestion or metabolic production) and output (due to excretion or metabolic consumption) is maintained in large part by the kidneys. This regulatory function of the kidneys maintains the stable environment of the cells necessary for them to perform their various activities.

Although this and the next few sections focus mainly on the control of renal excretion, it is important to recognize that the kidneys serve multiple functions, including the following:

Excretion of Metabolic Waste Products, Foreign Chemicals, Drugs, and Hormone Metabo- lites. The kidneys are the primary means for eliminating waste products ofmetabolism that are no longer needed by the body. These products include urea (from the metabolism of amino acids), creatinine (from muscle creatine), uricacid (from nucleic acids), end products of hemoglobin breakdown (such asbilirubin), and metabolites of various hormones. These waste products must be eliminated from the body as rapidly as they are produced. The kidneys also eliminate most toxins and other foreign substances that are either produced by the body or ingested, such as pesticides, drugs, and food additives.

Intake of water and many electrolytes is governed mainly by a person’s eating and drinking habits, requiring the kidneys to adjust their excretion rates to match the intake of various substances. Figure 26–1 shows the response of the kidneys to a sudden 10-fold increase in sodium intake from a low level of 30 mEq/day to a high level of 300 mEq/day. Within 2 to 3 days after raising the 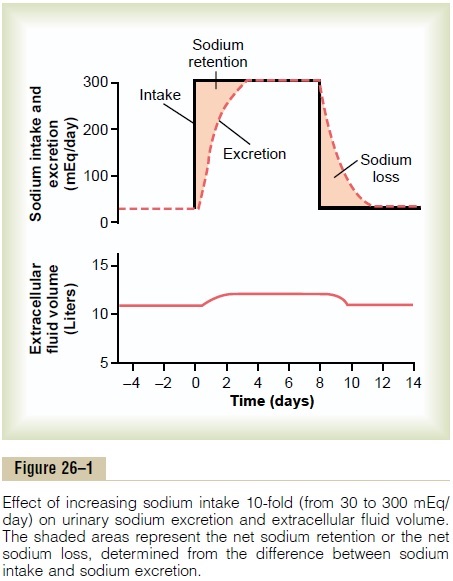 sodium intake, renal excretion also increases to about 300 mEq/day, so that a balance between intake and output is re-established. However, during the 2 to 3 days of renal adaptation to the high sodium intake, there is a modest accumulation of sodium that raises extracellular fluid volume slightly and triggers hor-monal changes and other compensatory responses that signal the kidneys to increase their sodium excretion.

The capacity of the kidneys to alter sodium excre-tion in response to changes in sodium intake is enor-mous. Experimental studies have shown that in many people, sodium intake can be increased to 1500 mEq/ day (more than 10 times normal) or decreased to 10 mEq/day (less than one tenth normal) with rela-tively small changes in extracellular fluid volume or plasma sodium concentration. This is also true for water and for most other electrolytes, such as chloride, potassium, calcium, hydrogen, magnesium, and phos-phate ions. In the next few, we discuss the spe-cific mechanisms that permit the kidneys to perform these amazing feats of homeostasis.

Regulation of Arterial Pressure.  As discussed, the kidneys play a dominant role in long-term reg-ulation of arterial pressure by excreting variable amounts of sodium and water. The kidneys also con-tribute to short-term arterial pressure regulation by secreting vasoactive factors or substances, such as renin, that lead to the formation of vasoactive prod-ucts (e.g., angiotensin II).

Regulation of Acid-Base Balance. The kidneys contributeto acid-base regulation, along with the lungs and body fluid buffers, by excreting acids and by regulating the body fluid buffer stores. The kidneys are the only means of eliminating from the body certain types of acids, such as sulfuric acid and phosphoric acid, gen-erated by the metabolism of proteins.

Regulation of 1,25–Dihydroxyvitamin D3 Production. The kidneys produce the active form of vitamin D, 1,25-dihydroxyvitamin D3 (calcitriol), by hydroxylating this vitamin at the “number 1” position. Calcitriol is essen-tial for normal calcium deposition in bone and calcium reabsorption by the gastrointestinal tract. As discussed, calcitriol plays an important role in calcium and phosphate regulation.

With chronic kidney disease or acute failure of the kidneys, these homeostatic functions are disrupted, and severe abnormalities of body fluid volumes and composition rapidly occur. With complete renal failure, enough potassium, acids, fluid, and other sub-stances accumulate in the body to cause death within a few days, unless clinical interventions such as hemodialysis are initiated to restore, at least partially, the body fluid and electrolyte balances.