Determinants of the GFR

Determinants of the GFR 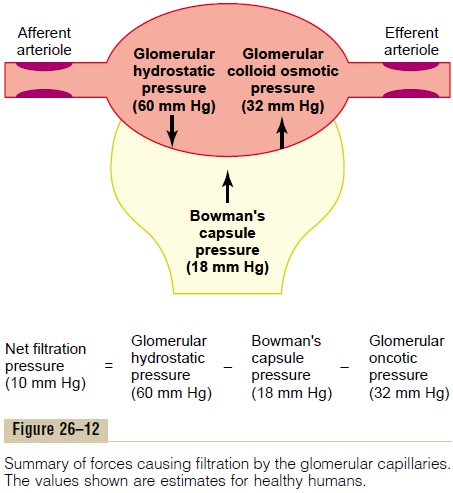 The GFR can therefore be expressed as

Although the normal values for the determinants of GFR have not been measured directly in humans, they have been estimated in animals such as dogs and rats. Based on the results in animals, the approximate normal forces favoring and opposing glomerular fil-tration in humans are believed to be as follows (see Figure 26–12):

Some of these values can change markedly under different physiologic conditions, whereas others are altered mainly in disease states, as discussed later.

The Kf is a measure of the product of the hydraulic conductivity and surface area of the glomerular capil-laries. The Kf cannot be measured directly, but it is estimated experimentally by dividing the rate of glomerular filtration by net filtration pressure:

Because total GFR for both kidneys is about 125 ml/ min and the net filtration pressure is 10 mm Hg, the normal Kf is calculated to be about 12.5 ml/min/mm Hg of filtration pressure. When Kf  is expressed per 100 grams of kidney weight, it averages about 4.2 ml/min/mm Hg, a value about 400 times as high as the Kf of most other capillary systems of the body; the average Kf of many other tissues in the body is only about 0.01 ml/min/mm Hg per 100 grams. This high Kf for the glomerular capillaries contributes tremen-dously to their rapid rate of fluid filtration.

Although increased Kf raises GFR and decreased Kf reduces GFR, changes in Kf probably do not provide a primary mechanism for the normal day-to-day regu-lation of GFR. Some diseases, however, lower Kf by reducing the number of functional glomerular capil-laries (thereby reducing the surface area for filtration) or by increasing the thickness of the glomerular capillary membrane and reducing its hydraulic con-ductivity. For example, chronic, uncontrolled hyper-tension and diabetes mellitus gradually reduce Kf by increasing the thickness of the glomerular capillary basement membrane and, eventually, by damaging the capillaries so severely that there is loss of capillary function. 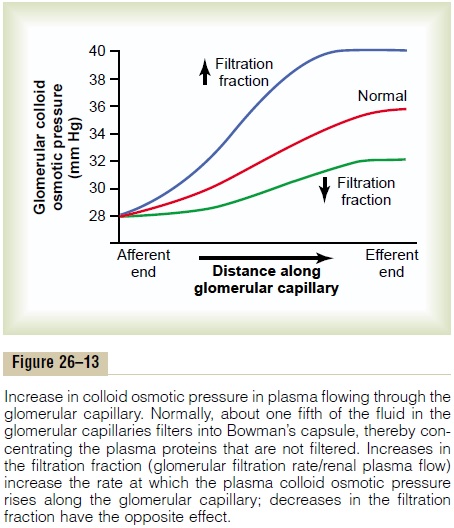 by the time the blood reaches the efferent end of the capillaries. Therefore, the average colloid osmotic pressure of the glomerular capillary plasma proteins is midway between 28 and 36 mm Hg, or about 32 mm Hg.

Increased arterial pressure tends to raise glomeru-lar hydrostatic pressure and, therefore, to increase GFR. (However, as discussed later, this effect is buffered by autoregulatory mechanisms that maintain a relatively constant glomerular pressure as blood pressure fluctuates.) 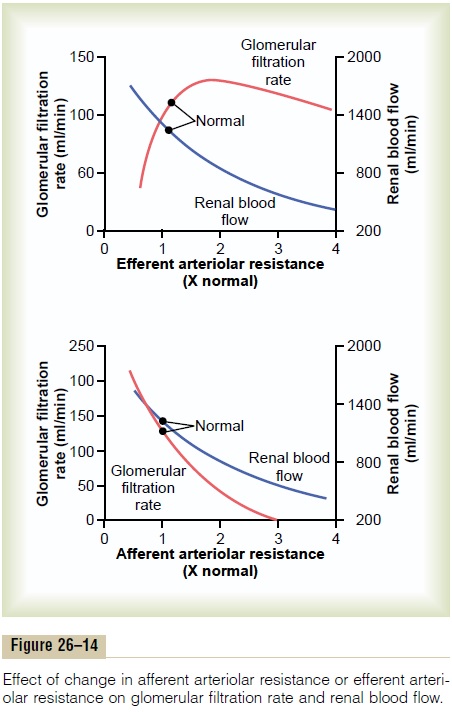 Thus, efferent arteriolar constriction has a biphasic effect on GFR. At moderate levels of constriction, there is a slight increase in GFR, but with severe con-striction, there is a decrease in GFR. The primary cause of the eventual decrease in GFR is as follows: As efferent constriction becomes severe and as plasma protein concentration increases, there is a rapid, non-linear increase in colloid osmotic pressure caused by the Donnan effect; the higher the protein concentra-tion, the more rapidly the colloid osmotic pressure rises because of the interaction of ions bound to the plasma proteins, which also exert an osmotic effect.

Table 26–2 summarizes the factors that can decrease GFR. 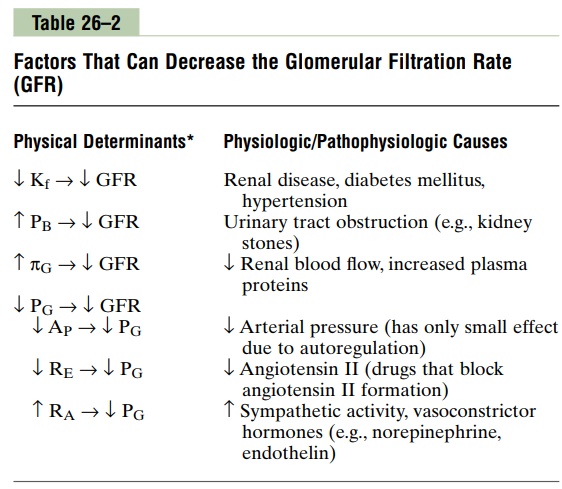