In an average 70-kilogram man, the combined blood flow through both kidneys is about 1100 ml/min, or about 22 per cent of the cardiac output. Considering the fact that the two kidneys constitute only about 0.4 per cent of the total body weight, one can readily see that they receive an extremely high blood flow com-pared with other organs.

In an average 70-kilogram man, the combined blood flow through both kidneys is about 1100 ml/min, or about 22 per cent of the cardiac output. Considering the fact that the two kidneys constitute only about 0.4 per cent of the total body weight, one can readily see that they receive an extremely high blood flow com-pared with other organs.

As with other tissues, blood flow supplies the kidneys with nutrients and removes waste products. However, the high flow to the kidneys greatly exceeds this need. The purpose of this additional flow is to supply enough plasma for the high rates of glomeru-lar filtration that are necessary for precise regulation of body fluid volumes and solute concentrations. As might be expected, the mechanisms that regulate renal blood flow are closely linked to the control of GFR and the excretory functions of the kidneys.

On a per gram weight basis, the kidneys normally consume oxygen at twice the rate of the brain but have almost seven times the blood flow of the brain. Thus, the oxygen delivered to the kidneys far exceeds their metabolic needs, and the arterial-venous extraction of oxygen is relatively low compared with that of most other tissues. 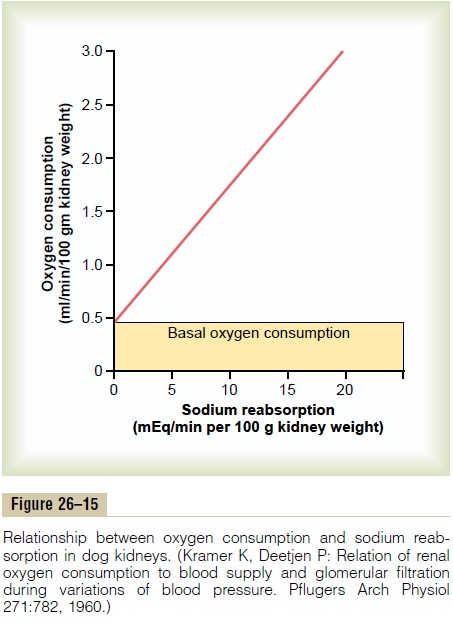 Renal blood flow is determined by the pressure gradi-ent across the renal vasculature (the difference between renal artery and renal vein hydrostatic pres-sures), divided by the total renal vascular resistance:

Renal artery pressure is about equal to systemic arterial pressure, and renal vein pressure averages about 3 to 4 mm Hg under most conditions. As in other vascular beds, the total vascular resistance through the kidneys is determined by the sum of the resistances in the individual vasculature segments, including the arteries, arterioles, capillaries, and veins (Table 26–3).

Most of the renal vascular resistance resides in three major segments: interlobular arteries, afferent arteri-oles, and efferent arterioles. Resistance of these vessels is controlled by the sympathetic nervous system, various hormones, and local internal renal control mechanisms, as discussed later. An increase in the resistance of any of the vascular segments of the kidneys tends to reduce the renal blood flow, whereas a decrease in vascular resistance increases renal blood flow if renal artery and renal vein pressures remain constant.

Although changes in arterial pressure have some influence on renal blood flow, the kidneys have effec-tive mechanisms for maintaining renal blood flow and GFR relatively constant over an arterial pressure range between 80 and 170 mm Hg, a process called autoregulation. This capacity for autoregulation occursthrough mechanisms that are completely intrinsic to the kidneys.

The outer part of the kidney, the renal cortex, receives most of the kidney’s blood flow. Blood flow in the renal medulla accounts for only 1 to 2 per cent of the total renal blood flow. Flow to the renal medulla is supplied by a specialized portion of the peritubular capillary system called the vasa recta. These vessels descend into the medulla in parallel with the loops of Henle and then loop back along with the loops of Henle and return to the cortex before emptying into the venous system. As discussed, the vasa recta play an important role in allowing the kidneys to form a concentrated urine.