Probenecid and sulfinpyrazone are uricosuric drugs employed to decrease the body pool of urate in patients with tophaceous gout or in those with increasingly frequent gouty attacks.

Probenecid and sulfinpyrazone are uricosuric drugs employed to decrease the body pool of urate in patients with tophaceous gout or in those with increasingly frequent gouty attacks. In a patient who excretes large amounts of uric acid, the uricosuric agents should not be used.

Uricosuric drugs are organic acids (Figure 36–6) and, as such, act at the anionic transport sites of the renal tubule . Sulfinpyrazone is a metabolite of an analog of phenylbutazone. 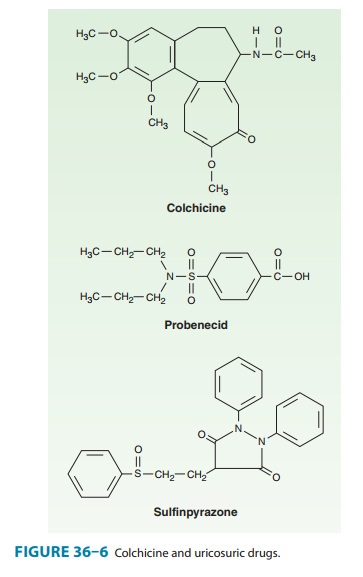 Probenecid is completely reabsorbed by the renal tubules and is metabolized slowly with a terminal serum half-life of 5–8 hours. Sulfinpyrazone or its active hydroxylated derivative is rapidly excreted by the kidneys. Even so, the duration of its effect after oral administration is almost as long as that of probenecid, which is given once or twice daily.

Uric acid is freely filtered at the glomerulus. Like many other weak acids, it is also both reabsorbed and secreted in the middle seg-ment (S2) of the proximal tubule. Uricosuric drugs—probenecid, sulfinpyrazone, and large doses of aspirin—affect these active transport sites so that net reabsorption of uric acid in the proximal tubule is decreased. Because aspirin in doses of less than 2.6 g daily causes net retention of uric acid by inhibiting the secretory trans-porter, it should not be used for analgesia in patients with gout. The secretion of other weak acids (eg, penicillin) is also reduced by uricosuric agents. Probenecid was originally developed to pro-long penicillin blood levels.

As the urinary excretion of uric acid increases, the size of the urate pool decreases, although the plasma concentration may not be greatly reduced. In patients who respond favorably, tophaceous deposits of urate are reabsorbed, with relief of arthritis and remin-eralization of bone. With the ensuing increase in uric acid excre-tion, a predisposition to the formation of renal stones is augmented rather than decreased; therefore, the urine volume should be maintained at a high level, and at least early in treatment, the urine pH should be kept above 6.0 by the administration of alkali.

Uricosuric therapy should be initiated in gouty patients with underexcretion of uric acid when allopurinol or febuxostat is con-traindicated or when tophi are present. Therapy should not be started until 2–3 weeks after an acute attack.

Adverse effects do not provide a basis for preferring one or the other of the uricosuric agents. Both of these organic acids cause GI irritation, but sulfinpyrazone is more active in this regard. A rash may appear after the use of either compound. Nephrotic syndrome has occurred after the use of probenecid. Both sulfin-pyrazone and probenecid may rarely cause aplastic anemia.

It is essential to maintain a large urine volume to minimize the possibility of stone formation.