Gout is a metabolic disease characterized by recurrent episodes of acute arthritis due to deposits of monosodium urate in joints and cartilage.

Gout is a metabolic disease characterized by recurrent episodes of acute arthritis due to deposits of monosodium urate in joints and cartilage. Uric acid renal calculi, tophi, and interstitial nephritis may also occur. Gout is usually associated with a high serum uric acid level (hyperuricemia), a poorly soluble substance that is the major end product of purine metabolism. In most mammals, uricase converts uric acid to the more soluble allantoin; this enzyme is absent in humans. While clinical gouty episodes are associated with hyperuricemia, most individuals with hyperuricemia may never develop a clinical event from urate crystal deposition.

The treatment of gout aims to relieve acute gouty attacks and prevent recurrent gouty episodes and urate lithiasis. Therapies for acute gout are based on our current understanding of the pathophysiologic events that occur in this disease (Figure 36–5). Urate crystals are initially phagocytosed by synoviocytes, which then release prostaglandins, lysosomal enzymes, and interleukin-1. Attracted by these chemotactic mediators, polymorphonuclear leukocytes migrate into the joint space and amplify the ongoing inflammatory process. In the later phases of the attack, increased numbers of mononuclear phagocytes (macrophages) appear, ingest the urate crystals, and release more inflammatory mediators. This sequence of events suggests that the most effective agents for the management of acute urate crystal-induced inflammation are those that suppress different phases of leukocyte activation. 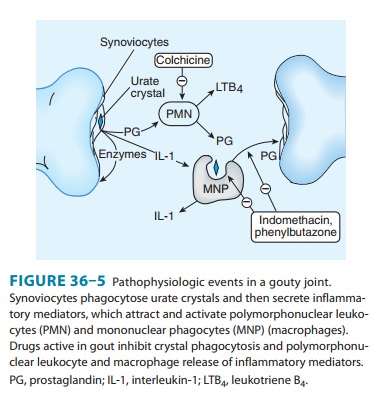 Before starting chronic urate-lowering therapy for gout, patients in whom hyperuricemia is associated with gout and urate lithiasis must be clearly distinguished from individuals with only hyperuricemia. The efficacy of long-term drug treatment in an asymptomatic hyperuricemic person is unproved. In some indi-viduals, uric acid levels may be elevated up to 2 standard deviations above the mean for a lifetime without adverse consequences.

Many different agents have been used for the treatment of acute and chronic gout. However, non-adherence to these drugs is exceed-ingly common; adherence has been documented to be as low as 26–18%, especially in younger patients. Providers should be aware of compliance as an important issue.