Diclofenac: Diclofenac is a phenylacetic acid derivative that is relatively non-selective as a COX inhibitor. Pharmacokinetic and dosage charac-teristics are set forth in Table 36–1.

Diclofenac is a phenylacetic acid derivative that is relatively non-selective as a COX inhibitor. Pharmacokinetic and dosage charac-teristics are set forth in Table 36–1.

Gastrointestinal ulceration may occur less frequently than with some other NSAIDs. A preparation combining diclofenac and misoprostol decreases upper gastrointestinal ulceration but may result in diarrhea. Another combination of diclofenac and omeprazole was also effective with respect to the prevention of recurrent bleeding, but renal adverse effects were common in high-risk patients. Diclofenac, 150 mg/d, appears to impair renal blood flow and glomerular filtration rate. Elevation of serum aminotransferases occurs more commonly with this drug than with other NSAIDs. 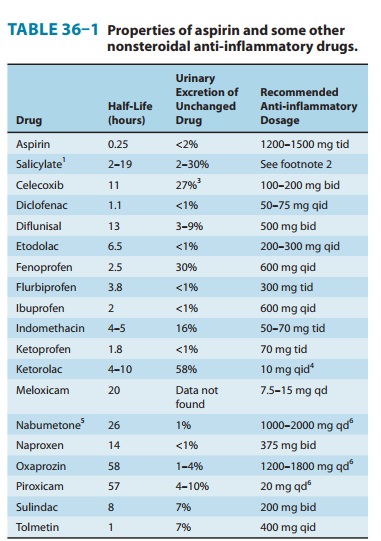 A 0.1% ophthalmic preparation is promoted for prevention of postoperative ophthalmic inflammation and can be used after intraocular lens implantation and strabismus surgery. A topical gel containing 3% diclofenac is effective for solar keratoses. Diclofenac in rectal suppository form can be considered for preemptive anal-gesia and postoperative nausea. In Europe, diclofenac is also avail-able as an oral mouthwash and for intramuscular administration.

Although diflunisal is derived from salicylic acid, it is not metabo-lized to salicylic acid or salicylate. It undergoes an enterohepatic cycle with reabsorption of its glucuronide metabolite followed by cleavage of the glucuronide to again release the active moiety. Diflunisal is subject to capacity-limited metabolism, with serum half-lives at various dosages approximating that of salicylates (Table 36–1). In rheumatoid arthritis the recommended dose is 500–1000 mg daily in two divided doses. It is claimed to be par-ticularly effective for cancer pain with bone metastases and for pain control in dental (third molar) surgery. A 2% diflunisal oral ointment is a clinically useful analgesic for painful oral lesions.

Because its clearance depends on renal function as well as hepatic metabolism, diflunisal’s dosage should be limited in patients with significant renal impairment.

Etodolac is a racemic acetic acid derivative with an intermediate half-life (Table 36–1). Etodolac does not undergo chiral inversion in the body. The dosage of etodolac is 200–400 mg three to four times daily.

Flurbiprofen is a propionic acid derivative with a possibly more complex mechanism of action than other NSAIDs. Its (S)(–) enantiomer inhibits COX nonselectively, but it has been shown in rat tissue to also affect tumor necrosis factor-α (TNF-α) and nitric oxide synthesis. Hepatic metabolism is extensive; its (R)(+) and (S)

(–) enantiomers are metabolized differently, and it does not undergo chiral conversion. It does demonstrate enterohepatic circulation.

Flurbiprofen is also available in a topical ophthalmic formula-tion for inhibition of intraoperative miosis. Flurbiprofen intrave-nously is effective for perioperative analgesia in minor ear, neck, and nose surgery and in lozenge form for sore throat.Although its adverse effect profile is similar to that of other NSAIDs in most ways, flurbiprofen is also rarely associated with cogwheel rigidity, ataxia, tremor, and myoclonus.

Ibuprofen is a simple derivative of phenylpropionic acid (Figure 36–1). In doses of about 2400 mg daily, ibuprofen is equivalent to 4 g of aspirin in anti-inflammatory effect. Pharmacokinetic characteristics are given in Table 36–1. 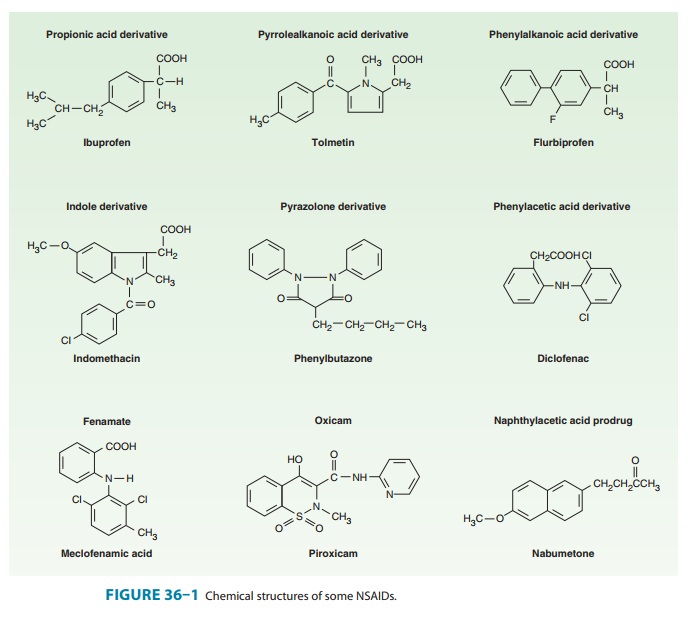 Oral ibuprofen is often prescribed in lower doses (<2400 mg/d), at which it has analgesic but not anti-inflammatory efficacy. It is available over the counter in low-dose forms under several trade names.

Ibuprofen is effective in closing patent ductus arteriosus in preterm infants, with much the same efficacy and safety as indo-methacin. The oral and intravenous routes are equally effective for this indication. A topical cream preparation appears to be absorbed into fascia and muscle; an (S )(–) formulation has been tested. Ibuprofen cream was more effective than placebo cream in the treatment of primary knee osteoarthritis. A liquid gel preparation of ibuprofen, 400 mg, provides prompt relief and good overall efficacy in postsurgical dental pain.

In comparison with indomethacin, ibuprofen decreases urine output less and also causes less fluid retention. The drug is rela-tively contraindicated in individuals with nasal polyps, angio-edema, and bronchospastic reactivity to aspirin. Aseptic meningitis (particularly in patients with systemic lupus erythematosus), and fluid retention have been reported. Interaction with anticoagu-lants is uncommon. The concomitant administration of ibuprofen and aspirin antagonizes the irreversible platelet inhibition induced by aspirin. Thus, treatment with ibuprofen in patients with increased cardiovascular risk may limit the cardioprotective effects of aspirin. Furthermore, the use of ibuprofen concomitantly with aspirin may decrease the total anti-inflammatory effect.

Indomethacin, introduced in 1963, is an indole derivative (Figure 36–1). It is a potent nonselective COX inhibitor and may also inhibit phospholipase A and C, reduce neutrophil migration, and decrease T-cell and B-cell proliferation.

It differs somewhat from other NSAIDs in its indications and toxicities.

It has been used to accelerate closure of patent ductus arteriosus. Indomethacin has been tried in numerous small or uncontrolled trials for many other conditions, including Sweet’s syndrome, juve-nile rheumatoid arthritis, pleurisy, nephrotic syndrome, diabetes insipidus, urticarial vasculitis, postepisiotomy pain, and prophy-laxis of heterotopic ossification in arthroplasty.

An ophthalmic preparation is efficacious for conjunctival inflammation and to reduce pain after traumatic corneal abrasion. Gingival inflammation is reduced after administration of indo-methacin oral rinse. Epidural injections produce a degree of pain relief similar to that achieved with methylprednisolone in post-laminectomy syndrome.

At usual doses, indomethacin has the common side effects listed above. The GI effects may include pancreatitis. Headache is expe-rienced by 15–25% of patients and may be associated with dizzi-ness, confusion, and depression. Rarely, psychosis with hallucinations has been reported. Renal papillary necrosis has also been observed. A number of interactions with other drugs have been reported . Probenecid prolongs indomethacin’s half-life by inhibiting both renal and biliary clearance.

Ketoprofen is a propionic acid derivative that inhibits both COX (nonselectively) and lipoxygenase. Its pharmacokinetic character-istics are given in Table 36–1. Concurrent administration of probenecid elevates ketoprofen levels and prolongs its plasma half-life.The effectiveness of ketoprofen at dosages of 100–300 mg/d is equivalent to that of other NSAIDs. In spite of its dual effect on prostaglandins and leukotrienes, ketoprofen is not superior to other NSAIDs in clinical efficacy. Its major adverse effects are on the GI tract and the central nervous system (see common adverse effects above).

Ketorolac is an NSAID promoted for systemic use mainly as an anal-gesic, not as an anti-inflammatory drug (although it has typical NSAID properties). Pharmacokinetics are presented in Table 36–1. The drug is an effective analgesic and has been used successfully to replace morphine in some situations involving mild to moderate postsurgical pain. It is most often given intramuscularly or intrave-nously, but an oral dose formulation is available. When used with an opioid, it may decrease the opioid requirement by 25–50%. An oph-thalmic preparation is available for ocular inflammatory conditions. Toxicities are similar to those of other NSAIDs, although renal toxicity may be more common with chronic use.x

Nabumetone is the only nonacid NSAID in current use; it is converted to the active acetic acid derivative in the body. It is given as a ketone prodrug that resembles naproxen in structure (Figure 36–1). Its half-life of more than 24 hours (Table 36–1) permits once-daily dosing, and the drug does not appear to undergo enterohepatic circulation. Renal impairment results in a doubling of its half-life and a 30% increase in the area under the curve.Its properties are very similar to those of other NSAIDs, though it may be less damaging to the stomach than some other NSAIDs when given at a dosage of 1000 mg/d. Unfortunately, higher dosages (eg, 1500–2000 mg/d) are often needed, and this is a very expensive NSAID. Like naproxen, nabumetone has been associated with pseudoporphyria and photosensitivity in some patients. Other adverse effects mirror those of other NSAIDs.

Naproxen is a naphthylpropionic acid derivative. It is the only NSAID presently marketed as a single enantiomer. Naproxen’s free fraction is significantly higher in women than in men, but half-life is similar in both sexes (Table 36–1). Naproxen is effective for the usual rheumatologic indications and is available in a slow-release formulation, as an oral suspension, and over the counter. A topical preparation and an ophthalmic solution are also available.The incidence of upper GI bleeding in over-the-counter use is low but still double that of over-the-counter ibuprofen (perhaps due to a dose effect). Rare cases of allergic pneumonitis, leukocy-toclastic vasculitis, and pseudoporphyria as well as the common NSAID-associated adverse effects have been noted.

Oxaprozin is another propionic acid derivative NSAID. As noted in Table 36–1, its major difference from the other members of thissubgroup is a very long half-life (50–60 hours), although oxapro-zin does not undergo enterohepatic circulation. It is mildly urico-suric, making it potentially more useful in gout than some other NSAIDs. Otherwise, the drug has the same benefits and risks that are associated with other NSAIDs.

Piroxicam, an oxicam (Figure 36–1), is a nonselective COX inhib-itor that at high concentrations also inhibits polymorphonuclear leukocyte migration, decreases oxygen radical production, and inhibits lymphocyte function. Its long half-life (Table 36–1) permits once-daily dosing.Piroxicam can be used for the usual rheumatic indications. When piroxicam is used in dosages higher than 20 mg/d, an increased incidence of peptic ulcer and bleeding is encountered. Epidemiologic studies suggest that this risk is as much as 9.5 times higher with piroxicam than with other NSAIDs (see common adverse effects above).

Sulindac is a sulfoxide prodrug. It is reversibly metabolized to the active sulfide metabolite, which is excreted in bile and then reabsorbed from the intestine. The enterohepatic cycling prolongs the duration of action to 12–16 hours.In addition to its rheumatic disease indications, sulindac suppresses familial intestinal polyposis and it may inhibit the development of colon, breast, and prostate cancer in humans. It appears to inhibit the occurrence of GI cancer in rats. The latter effect may be caused by the sulfone rather than the sulfide.Among the more severe adverse reactions, Stevens-Johnson epidermal necrolysis syndrome, thrombocytopenia, agranulocyto-sis, and nephrotic syndrome have all been observed. Like diclofenac, sulindac may have some propensity to cause elevation of serum aminotransferases; it is also sometimes associated with cholestatic liver damage, which disappears when the drug is stopped.

Tolmetin is a nonselective COX inhibitor with a short half-life (1–2 hours) and is not often used. Its efficacy and toxicity profiles are similar to those of other NSAIDs with the following excep-tions: it is ineffective (for unknown reasons) in the treatment of gout, and it may cause (rarely) thrombocytopenic purpura.