Uptake and distribution of inhaled anesthetics

Behind this bland title lurks a concept that has baffled students for years, yet it is fairly straightforward.

Uptake and distribution of inhaled anesthetics

Behind this bland title lurks a concept that has baffled students for years, yet it is fairly straightforward. Here are the facts:

(i)       Solubility of the anesthetic in blood has nothing to do with its potency. Indeed, anesthetic effectiveness has to do with the partial pressure of the drug and not with the amount of drug in solution.

(ii)    Anesthetics taken up by the blood flowing through the lungs are distributed into different body compartments, depending on the blood flow these com-partments receive, the volume of the compartment, and the solubility of the anesthetic agent in that compartment.

(iii)  The partial pressure exerted by a vapor in solution has nothing to do with the ambient pressure, but has much to do with the temperature of the solution.

Let us take these three items one by one:

(i)       Solubility of the anesthetic in blood has nothing to do with its potency. Table 12.5tells the story. At equilibrium, you will find 12 times as much ether (when we say “ether” we refer to diethyl ether; some of the halogenated anesthetics are chemically also ethers, but we call them by their given name, e.g., sevoflurane and desflurane) in blood than in the overlying gas (blood/gas partition coefficient). The blood practically slurps up the ether. Every breath that brings in more ether dumps its load of the anesthetic into the blood perfusing the lungs. It takes breath after breath to deliver enough ether for the blood to come into equilibrium with the alveolar gas. At equilibrium, the partial pressure (but not the concentration per unit of volume) of the ether in the gas phase (alveolar gas) is the same as in the blood.

We have picked ether (no longer used in the Western world but widely used elsewhere) because of its extraordinary solubility in blood at body tempera-ture. In comparisson, look at sevoflurane. Ether is 20 times as soluble in blood as is sevoflurane. We can quickly bring enough sevoflurane into the alveoli to establish an equilibrium between alveolar gas and blood. For ether, it will take many, many breaths laden with ether to fill the blood compartment and to reach equilibrium between alveolar gas and blood. Yet, diethyl ether and sevoflurane have almost identical MAC values. MAC stands (neither for a computer nor for a truck) for minimal alveolar concentration, namely the concentration in alveolar gas at which 50% of patients no longer respond to a painful stimulus. Thus, when we have attained MAC values for ether and MAC values for sevoflurane, there will be much, much more ether dissolved in the patient than will be true for sevoflurane. It will be quicker to get the patient to sleep – and have him wake up again – with sevoflurane than with ether.

(ii) Anesthetics taken up by the lungs are distributed into different body com-partments, depending on the blood flow these compartments receive, their volume, and the solubility of the anesthetic agent in that compartment.

Figure 12.3shows the relationships. Observe the low blood flow and large volume of the fat compartment (not even assuming an obese patient!) and the small volume but enormous blood flow to the vessel rich group. 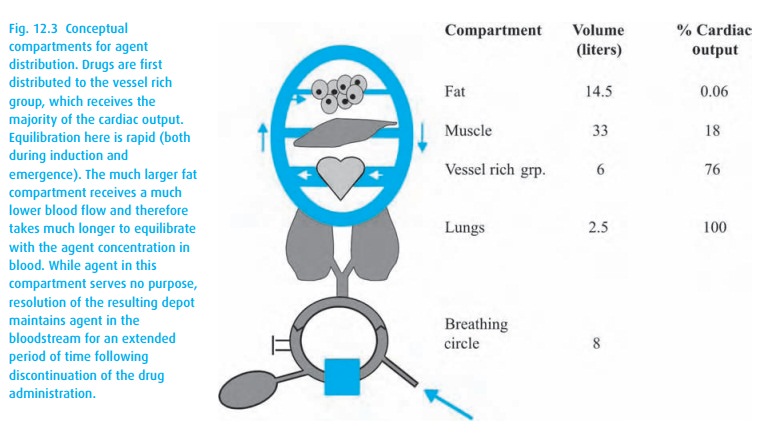 These “compartments” are conceptual rather than anatomical; the vessel rich group contains heart and brain as well as kidney and liver.

You can easily imagine that during a long anesthetic, the fat compartment, despite its low perfusion, will accumulate much anesthetic agent because inhalation anesthetics are so very soluble in fat (they make excellent grease stain removers). At the end of the anesthetic, the poorly perfused fat compart-ment will slowly deliver anesthetic to the venous blood, causing the patient to have a protracted recovery from the anesthetic; the greater the solubility of the agent in fat, the more protracted.

(iii)  The partial pressure exerted by a vapor in solution has nothing to do with the ambient pressure, but has much to do with the temperature of the solution.

Water vapor in the lungs at 37 °C has a vapor pressure of 47 mmHg. At that temperature, as many molecules of water leave the blood as enter it. The vapor pressure increases with rising temperatures. At the boiling point, the vapor pressure equals ambient pressure (at the top of the mountain you need to boil your egg a little longer because the water will boil at a lower temper-ature). At sea level (1 atmosphere or 760 mmHg ambient pressure), it takes 1.15% of isoflurane to render 50% of the population unresponsive to noxious (if the patient were awake the word would be “painful”) stimuli. At that baro-metric pressure, 1.15% equals about 9 mmHg. At altitude with a barometric pressure of 500 mmHg, these same 9 mmHg would be about 1.8% of vapor in the alveolar gas. Thus, the convention of reporting anesthetic concentrations in percent – as our vaporizers do – leaves something to be desired. In Table 12.6, we compare isoflurane MAC values in two cities of very different alti-tude that happen to have the same name. Remember that about half of our patients will be responsive, i.e., with a movement without being necessarily conscious, at 1 MAC. In order to have almost 100% of patients unrespon-sive to noxious (painful) stimuli, we need to expose them to 1.3 MAC. Also, remember that most patients have been given other CNS depressants; MAC values change with age (down they go); and distribution of the anesthetic agents also depends on the patient’s cardiac output, which, in shock with a very low cardiac output, may send a disproportionate percentage of the blood to brain and heart.

We can anticipate that many CNS depressants will lower MAC. Intuitively not so obvious, however, are reports that hyponatremia, metabolic acidosis, alpha methyldopa, chronic dextroamphetamine usage, levodopa, and alpha-2 agonists can lower MAC, as does pregnancy. We find elevated MAC values in hyperna-tremia, hyperthermia, and in patients taking monoamine oxidase inhibitors, cocaine and ephedrine. The administration of a sympathomimetic can some-times lighten anesthesia. Because we always titrate anesthetics to a desired effect and because patients vary greatly in their response to drugs – anesthetics as well as others – these differences in MAC rarely influence our anesthetic practice.