The drugs with the longest history of intravenous use in anesthesia are the barbiturates.

The drugs with the longest history of intravenous use in anesthesia are the barbiturates. While many different barbiturates have been synthesized and used, the drugs most commonly found in current anesthesia practice are thiopental (Pen-tothal®) and methohexital (Brevital®). These drugs share the basic barbituric acid foundation (Fig. 12.1), which by itself has no CNS depressant effect. Sub-stitutions on position 5 give us pentobarbital, a slow- and long-acting hypnotic. Simply substituting sulfur for the oxygen on position 2 turns the drug into the highly lipid soluble, fast-acting thiopental. 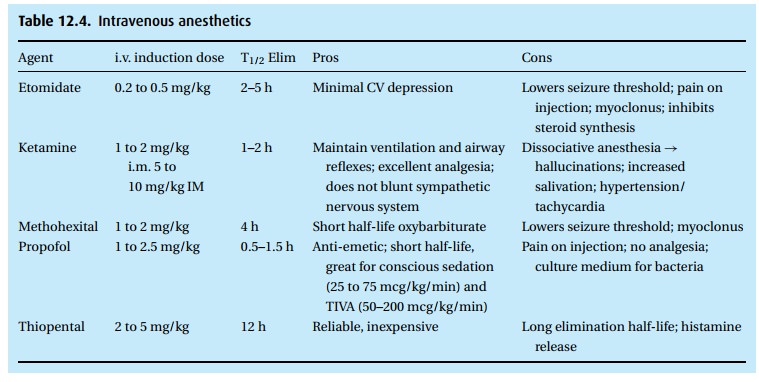 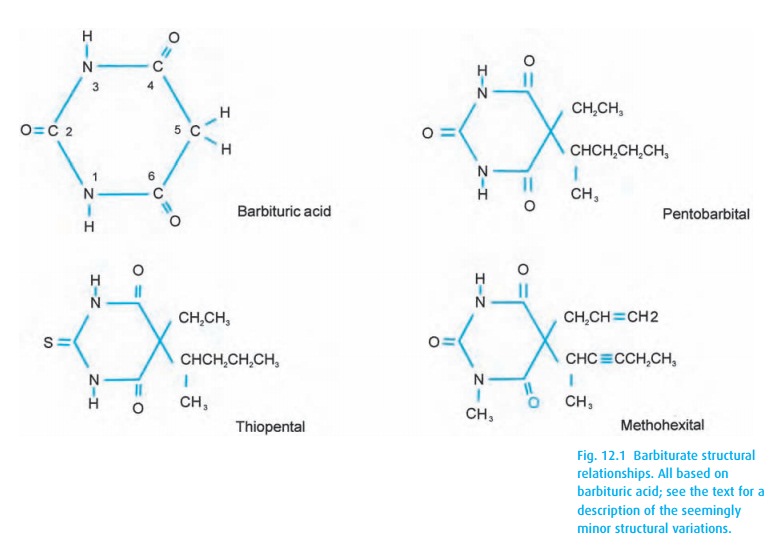 After an intravenous thiopental bolus, e.g., 4 mg/kg, the patient falls asleep in less than a minute and comes around again within a few more minutes. The drug owes its rapid onset of effect to the S= substitution on position 2 and to the fact that the “vessel rich group” (tissues with a high blood flow; especially the brain) gets the first lion’s share of the drug. Then the other body compartments pick up more and more drug during the distribution phase, and brain levels fall off rapidly (see Fig. 12.2). 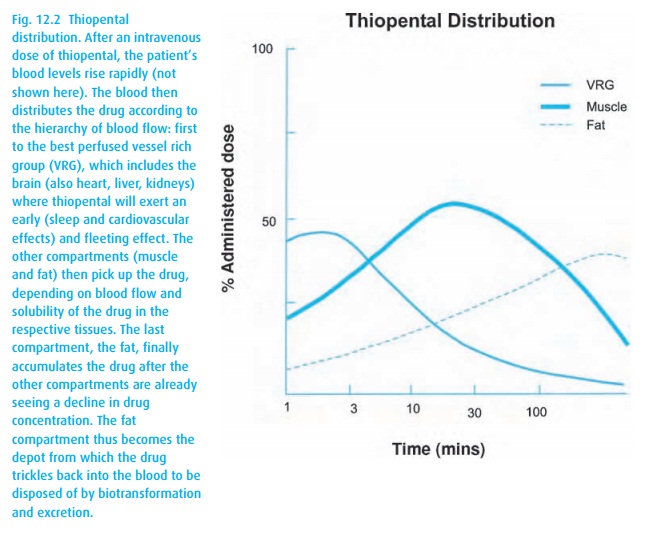 For an animated mental model of this type of drug distribution, see a simulation for a muscle relaxant; the depicted principle applies to other drugs (www.anest.ufl.edu/EA). You will appreciate that much drug not contributing to the primary and desired drug effect lingers in other body compartments. The drug in these “silent” compartments will trickle back into the circulation and the brain for a hang-over effect. Eventually, all of the drug will undergo biotransformation and excretion, but the elimination half-life of thiopental takes about 12 hours. Some of the biotransformation will convert the drug back into an oxybarbiturate (O= instead of S= in position 2), reducing lipid solubility and extending the depressant effect.

Drugs other than thiobarbiturates can have a rapid onset, as exemplified by methohexital, which is a little more potent and more rapidly metabolized than thiopental. All barbiturates used in anesthesia reduce sympathetic control of the peripheral vasculature, thereby increasing the capacitance of the venous system, which in turn leads to reduced preload. Coupled with a negative inotropic effect on the myocardium, blood pressure falls. In compensation, the baroreceptors will accelerate heart rate and mitigate the reduction of cardiac output. Respiration is also depressed. These negative effects do not play a major role in anesthesia of healthy patients where hydration with intravenous fluids can compensate for the reduced preload from venous pooling, and where we routinely overcome depressed ventilation by manual or mechanical ventilation. In addition, the barbiturates tend to constrict the blood vessels in the brain, a welcome side effect when increased intracranial pressure concerns us in patients with tumors or head trauma.

Propofol is another frequently used intravenous anesthetic. As a phenol, it belongs to an entirely different category of drugs. Not being water soluble, it is presented in a milky-white emulsion of oil, glycerol, and lecithin (“Milk of Amnesia”), an ideal culture medium for bacteria. Sterile technique, of course, is mandatory for all intravenous injections. However, with propofol, we dare not keep an open vial for later use. Because an injection of propofol into a small vein smarts, we often elevate the arm during injection and give it together with a local anesthetic, systemic narcotics, or a tiny dose of thiopental or ketamine. A typical induction dose might be 1 to 2.5 mg/kg. Propofol, 20 to 200 mcg/kg/min, is often given as a continuous infusion for sedation or sleep, for example when a child must hold still for radiation treatment. Together with nitrous oxide (nitrous oxide provides the analgesia, propofol the sleep), it also serves well for short surgical procedures because patients awaken rapidly from this technique and rarely suffer nausea or vomiting.

Propofol also lowers the blood pressure by a negative inotropic myocardial effect, vasodilatation, venous pooling, and reduced preload. It depresses ventila-tion and reduces cerebral perfusion. Occasionally, patients show mild myoclonic movements during propofol infusion. The drug is cleared from the plasma much more rapidly than thiopental, and the lack of a hangover and freedom from nausea after recovery have secured propofol a place in outpatient anesthesia.

This drug is chemically unrelated to barbiturates and propofol and enjoys the (per-haps overrated) reputation of causing little cardiovascular depression. It finds use primarily in patients with heart disease where 0.2 to 0.5 mg/kg is given for induc-tion of anesthesia – preferably into a large vein with a rapidly running infusion in order to minimize pain from venous irritation. Etomidate lowers the seizure threshold. In up to half of all patients, it triggers a myoclonus, which appears to be harmless. The drug inhibits cortisol and aldosterone synthesis (via dose-dependent inhibition of 11 β-hydroxylase), a feature that makes it unsuitable for long-term intravenous sedation in the ICU.

This drug occupies a peculiar position between the induction agents on the one hand and the narcotic analgesics on the other. It provides both sleep and anal-gesia – but at a cost. The drug is the grandchild of phencyclidine, a nasty com-pound that made a brief appearance as an intravenous anesthetic, soon aban-doned, and now mainly encountered as a psychedelic drug on the street and known under a medley of colorful names (PCP, Angel Dust, Dust, Sherm, Super Weed, Killer Weed, Elephant, Embalming Fluid, Hog, PCE, Rocket Fuel, TCP). Ketamine has shed almost all of the psychedelic effects of phencyclidine. It pro-vides excellent analgesia (via stimulation of both NMDA2 and opioid receptors), particularly of the integument and less so of the intestinal tract. It is classified as a dissociative anesthetic because, in low doses, the patient may appear to be awake (perhaps with open eyes and nystagmus) but unresponsive to sensory input. Only in deep anesthesia does the drug obtund airway reflexes, while in light anesthesia with spontaneous ventilation, bronchodilation is a welcome side effect, although increased secretions are bothersome. Unlike the other common anesthetic agents, ketamine stimulates the sympathetic nervous system, tending to increase heart rate and blood pressure. As such, it is often the drug of choice in the hypovolemic trauma patient. However, in cardiac patients in congestive fail-ure whose sympathetic system may be exhausted, the drug can reveal its direct myocardial depressant effect. Ketamine would also be relatively contra-indicated for patients at risk of high intracranial pressure, as its sympathetic stimulation increases cerebral blood flow. On awakening from the effect of the drug, many adults, but usually no pediatric patients, experience visual hallucinations and delirium.

In increasing dosages, we use ketamine for analgesia (0.2–0.5 mg/kg i.v.) or for induction of anesthesia (1 to 2 mg/kg i.v. or intramuscularly 5–10 mg/kg). To minimize the frequency of delirium, we give it together with one of the benzodia-zepines and to decrease secretions, we add an anti-sialogogue.