Today, narcotics play a major role in general anesthesia. Their advantage lies in their potent ability to abolish pain without depressing the heart. Their principle side effect remains powerful respiratory depression resulting in a decreased res-piratory rate and finally respiratory arrest (Fig. 12.4).

Today, narcotics play a major role in general anesthesia. Their advantage lies in their potent ability to abolish pain without depressing the heart. Their principle side effect remains powerful respiratory depression resulting in a decreased res-piratory rate and finally respiratory arrest (Fig. 12.4). 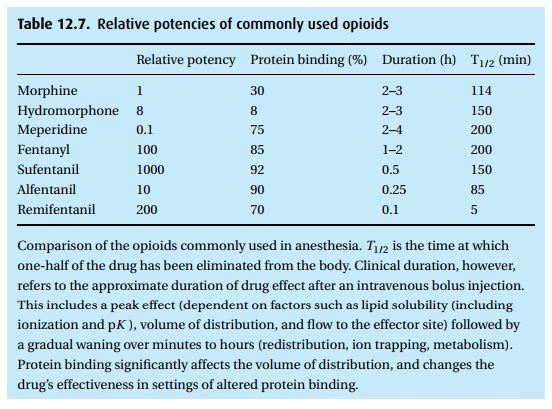 This side effect can be tol-erated if we are prepared to ventilate the patient’s lungs, as we do routinely when patients receive neuromuscular blocking drugs and thus require mechanical ven-tilation. Unchecked respiratory depression and elevation of arterial carbon diox-ide can reduce resistance in the arterial bed of the cerebral circulation, leading to increased intracranial pressure. Chemoreceptor depression by opioids reduces the respiratory response to hypoxemia; however, the administration of oxygen to a hypoxemic patient may further depress ventilation, demonstrating that chemo-receptor activity still contributes to the respiratory drive. 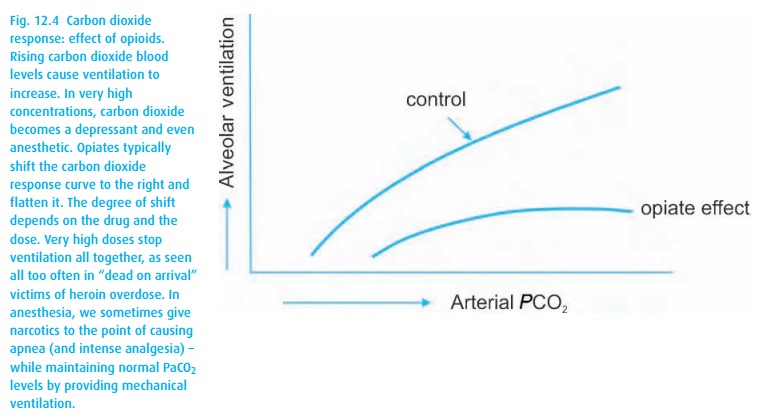 At this time in anesthesia, we have no useful opioid that would spare the µ-2 receptors responsible for respiratory depression, while exerting a full effect on the receptors apparently involved in analgesia (µ-1, δ-1, δ-2 and κ-3 for supraspinal analgesia, and µ-2, δ-2 and κ-1 for spinal analgesia). As mentioned in the brief his-torical piece, to be eaten alive by a lion may not be painful, presumably because the endogenous opioid polypeptides (the enkephalins, endorphins, dynorphins and neoendorphins) kick in – evidently without causing fatal respiratory depres-sion but presumably allowing for a gasp. We tend not to rely on this physio-logic response to gourmand lions, even with the most fearsome of surgeons at work.

Opioids exhibit many side effects other than respiratory depression. Interesting to anesthesia are the depressant effects on the autonomic nervous system with a decrease in sympathetic tone and a preponderance of vagal activity, leading to bradycardia and a reduction in blood pressure. The observed hypotension after large doses of opioids gives evidence of venous pooling (exaggerated in patients with a reduced blood volume) rather than a direct depressant effect on the heart. Meperidine, having vagolytic effects, behaves somewhat differently.

During a cholecystectomy, we need to be aware that opioids can increase the tone of the sphincter of Oddi, thereby increasing pressure in the biliary system and interfering with a surgeon’s attempt to perform a cholangiogram.

Opioids have numerous side effects in addition to respiratory depression. These range from miosis (the infamous pin-point pupils – again meperidine is the excep-tion), itching, constipation and nausea, to changes in mood (either euphoria or dysphoria, depending on the setting and the patient). Some of these effects have their origin locally (constipation), others centrally (chemoreceptor stimulation triggering nausea).

By now the opioids have amassed quite a retinue of narcotic compounds, some of which appear to have unrelated chemical footprints. While heroin, codeine, and many relatives show their kinship with morphine, others are classified as piperidines and phenylpiperidines, comprising meperidine and the different fen-tanyl drugs.

Morphine (Fig. 12.5) has a long tradition as an analgesic for wound pain with a typical i.m. dose of 10 mg for a 70 kg patient. Despite its propensity to stimulate his-tamine release, we make extensive use of i.v. morphine for management of acute pain, as an intra-operative analgesic and adjunct to general anesthesia, and post-operatively as the most common drug for patient-controlled analgesia (PCA). We also commonly administer morphine neuraxially (epidural or subarachnoid) to obtain 18–24 hours of post-surgical analgesia, though delayed respiratory depres-sion remains a concern. One of its metabolites, morphine-6-glucuronide, retains much of morphine’s activity and has been implicated in prolonged respiratory depression observed in patients with renal failure. 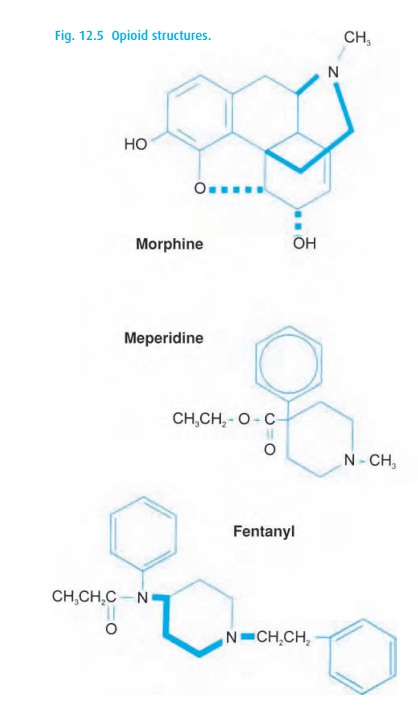 Another synthetic opioid, meperidine, deserves to be mentioned, though in anes-thesia we use it less today than before the arrival of its chemical grandchildren, the fentanyls. Meperidine (Fig. 12.5), with 1/10 the potency and shorter dura-tion of action than morphine, occupies a unique spot among opioids in its anti-muscarinic activity. Patients receiving meperidine do not develop the “pin-point pupils” we expect with other opioids; they may also become tachycardic and complain of a dry mouth. The drug can be associated with nausea and vomiting as well. Most importantly, it should not be given to patients taking monoamine oxidase inhibitors because severe respiratory depression, excitation, and even convulsions can be the consequence (serotonin syndrome). Meperidine’s main metabolite, normeperidine, lasts for days (T1/2 elimination = 15–40 h). Particularly in the setting of impaired renal function, the accumulation of normeperidine can cause myoclonus and seizures.

Fentanyl (Sublimaze®) (Fig. 12.5), with a potency 100 times that of morphine, has even more potent offspring. The growing list includes 3-methyl fentanyl, lofentanyl, and etorphin being several thousand-fold as potent as morphine. None have made it into the operating room. Nor are they needed as potency in the clinical setting means relatively little as long as the desired effect can be reached by adjusting the dose, and as long as that dose can be readily delivered. Clinical doses of the fentanyls are all in the microgram/kg range, thus posing no difficulty to intravenous administration.

The differences among the fentanyls reside primarily in the duration of action, since, in general, the respiratory depressant effect runs parallel with the analgesic effectiveness. There are small differences in the onset of action after an intra-venous bolus, with fentanyl and sufentanil (Sufenta®) taking about 6 minutes for the peak effect to set in while alfentanil (Alfenta®) and remifentanil (Ultiva®) reach their peaks in about a minute. Remifentanil, an ester, deserves special men-tion as the only narcotic that falls prey to non-specific plasma esterases that hydrolyze the drug, thus rapidly curtailing its effect. The other opioids have to rely on liver blood flow and hepatic biotransformation. A comparison of each of the commonly used opioids may be of help (Table 12.7).

Finally, let us mention that narcotic addiction has not spared anesthesia and nursing personnel. Easy access to narcotics has been blamed for the higher frequency of addiction among anesthesia personnel than other health care workers.

Opioids are antagonized by naloxone, chemically related to morphine and com-peting for receptor sites occupied by the agonists (See Table 12.8). In the adult, we usually start with 40–100 mcg naloxone intravenously, expecting to see a response within a minute. The half-life of the drug is around 40 minutes. Thus, patients who had been depressed by the longer acting drugs, such as morphine, must be observed for at least an hour in order not to miss recurring respiratory depression. In addicted patients under the influence of and tolerant to large doses of a narcotic analgesic, a larger dose of naloxone can trigger a stormy withdrawal reaction, as can administration of some of the mixed agonist-antagonist drugs, among them butorphanol (Stadol®) and nalbuphine (Nubain®). These latter agents have a ceiling effect on respiratory depression, a property considered vital in obstetrics where they are commonly used – never mind that the patient’s pain is not much relieved by these agents!

Clinical perspectives on the use of analgesics

In the chapter on Post-operative care, you will find a discussion of how to assess the severity of pain. Many different drugs find use in the treatment of pain. The following tables are not intended to guide therapy, but are presented here for the sake of orientation. We do not offer a discussion of these drugs and urge the reader to consult pharmacologic texts and the information offered by the manufacturers. For moderate to severe pain (VAS 5 to 7), you may see one of the drugs in Table 12.9prescribed. For mild pain we often use one of the common oral, non-narcotic analgesics that are available over the counter (Table 12.10). 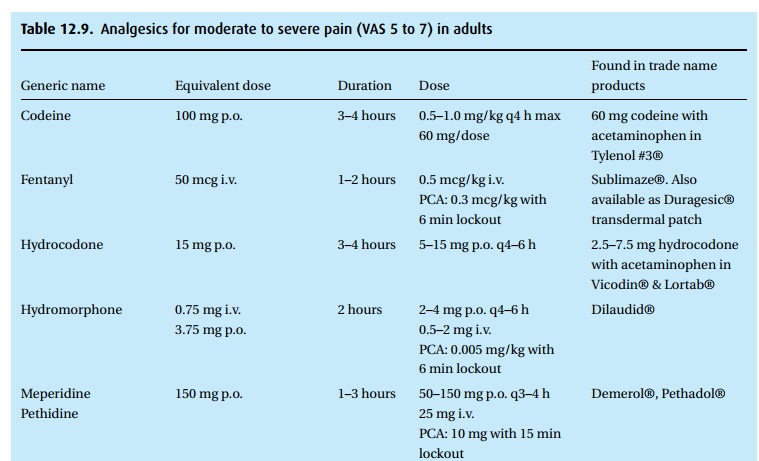 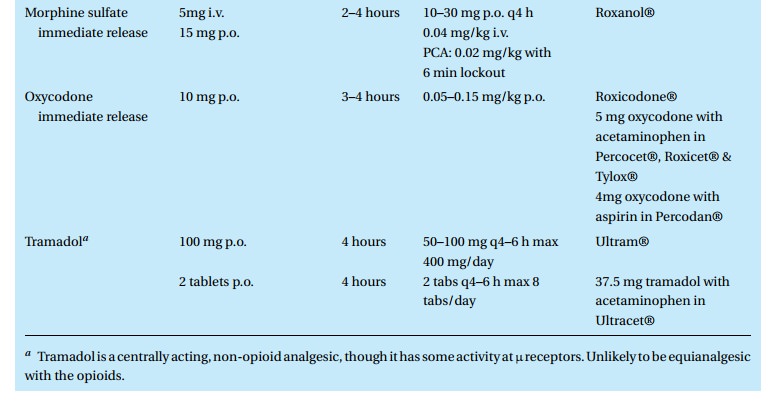 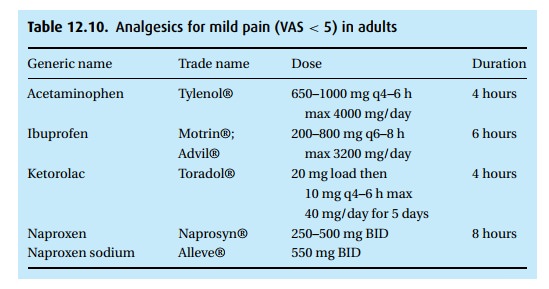