Peri-operatively, we see more tachycardias (light anesthesia) than bradycardias (which might be an ominous sign of profound hypoxemia or in children an indi-cation of all too deep anesthesia), and we treat them according to their etiologies.

Peri-operatively, we see more tachycardias (light anesthesia) than bradycardias (which might be an ominous sign of profound hypoxemia or in children an indi-cation of all too deep anesthesia), and we treat them according to their etiologies. That is, we would not give beta blockers to reduce heart rate if light anesthesia must be held responsible for the rapid rate, nor would we give atropine to treat hypoxemia-induced bradycardia.

For the treatment of arrhythmias of the atria and ventricles, we have a large selection of fairly specific drugs from which we have picked a few that find frequent use in anesthesia and/or cardiac life support (Table 12.16). Both atropine and glycopyrrolate can be used to treat symptomatic bradycardia. However, in patients with acute myocardial ischemia, raising the heart rate can be dangerous because it will increase oxygen demand. 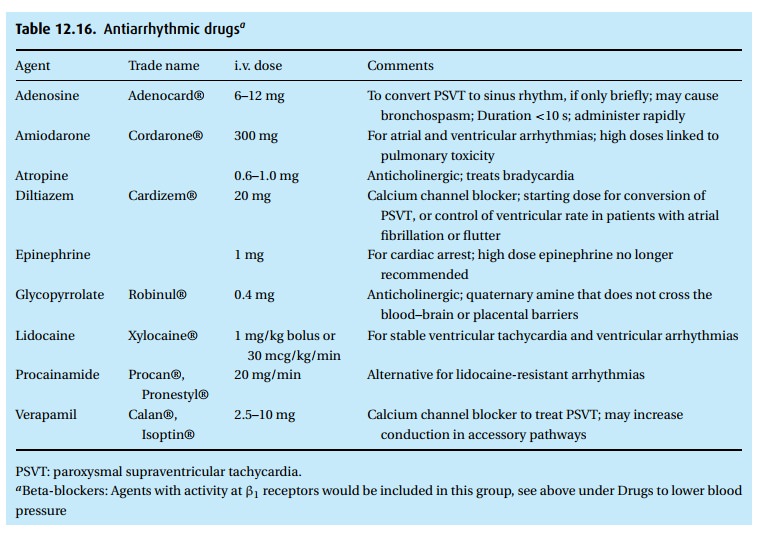 Adenosine as a drug occupies a special niche because the body itself synthesizes this fleeting byproduct of ATP. We use it primarily in the treatment of re-entrant AV node tachycardias such as paroxysmal supraventricular tachycardia (PSVT). Even if the rhythm fails to convert to sinus, the transient slowing of the tachycardia can help with a specific diagnosis.

Lidocaine and procainamide work not only as local anesthetics (lidocaine bet-ter than procainamide) but also as useful antiarrhythmic drugs in the treatment of ventricular extrasystoles. Two calcium channel blockers deserve mention: dilti-azem and verapamil. Both find use in the treatment of a variety of supraventricular arrhythmias and by slowing AV conduction, they can reduce heart rate in patients in atrial fibrillation.

Many drugs already discussed also appear in manuals on cardiac life support, for example in the treatment of arrhythmias and hypotension. The two drugs presented in Table 12.17not yet mentioned deserve a brief note. In the past, sodium bicarbonate was given in cardiac arrest probably more often than useful. Currently, the American Heart Association recommends it for the treatment of pre-existing hyperkalemia, in diabetic ketoacidosis, in patients overdosed with tricyclic antidepressants or cocaine, and to alkalinize the urine in aspirin poison-ing. We usually start with 1 mEq/kg and then, if possible, check arterial blood gases before giving more. Vasopressin, a relatively new addition to the list of drugs used in advanced cardiac life support, powerfully constricts vessels. A single dose of 40 units has been used instead of epinephrine in patients in ventricular fibrillation who had failed to respond to three shocks.