Instead of flooding the whole system, from head to toe, with an inhalation or intravenous anesthetic, we can inject an anesthetic locally; directly on a nerve; place it into the epidural or subarachnoid space, catching several nerves at once;

Instead of flooding the whole system, from head to toe, with an inhalation or intravenous anesthetic, we can inject an anesthetic locally; directly on a nerve; place it into the epidural or subarachnoid space, catching several nerves at once; or paint or spray it on mucous membrane as a topical anesthetic. Local anesthetics come in two chemical classes: esters and amides, with tetracaine (Pontocaine®) being a well-known ester and lidocaine (Xylocaine®) an even better known amide (Fig. 12.7). 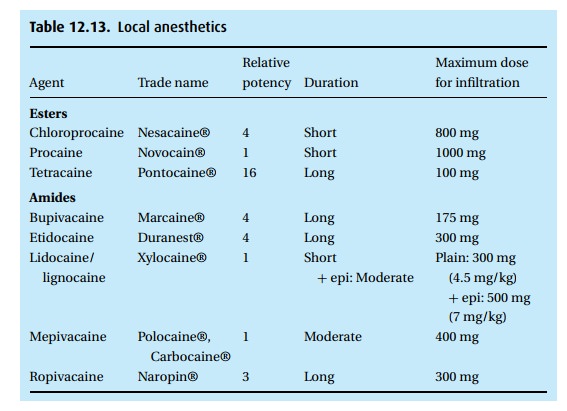 A trick for remembering the class of local anesthetics: if there is an ‘I’ before the “caine” it is an amIde. The trick to the trick, though, is this only works for the generic name of the drug, e.g., bupivacaine is an amide, even when found in a bottle labeled Marcaine®. 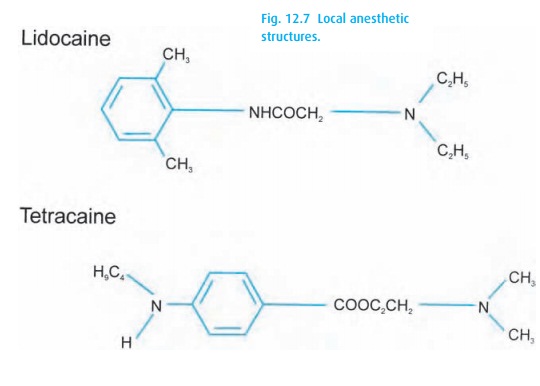 Local anesthetics interfere with nerve conduction by blocking ion fluxes through sodium channels. This blockade occurs from the inside of the cell. Local agents are weak bases with pKb (pH at which half of the base is ionized) values between 8 and 9; at a lower pH, more of the drug will be ionized and vice versa. Only the lipid-soluble, non-ionized form can penetrate cell membranes. Once inside, the cationic form of the drug is favored because the interior of the cell tends to be more acidic than the outside. This is fortuitous, since the cationic form will go to work on the ion channel. In general, an acidic medium – for exam-ple, inflamed tissue – will favor ionization and thus delay penetration of the drug, while an alkaline medium (such as adding bicarbonate to a highly acidic com-mercial preparation of lidocaine) can hasten the movement of the drug through membranes.

Different nerves exhibit different sensitivities to local anesthetics. We see the clinical evidence of this during spinal anesthesia where the block for cold sensa-tion and sympathetic activity extends to higher dermatome levels than for other sensations and motor activity. This is commonly attributed to resistance to block-ade provided by the thick, heavy myelin sheath coating the motor (Aα) fibers, which is lacking on the skinny non-myelinated preganglionic sympathetic (B) fibers and postganglionic sympathetic and dorsal root (C) fibers. However, the picture is quite complex. The sensitivity will also be influenced by the position of the nerve in a nerve bundle exposed to the local anesthetic, the speed of nerve conduction, and by how much of the nerve must be exposed to the anesthetic to block it.

Once injected or applied to a membrane, the drug will be carried away by the blood. To delay this, we often add epinephrine to the local anesthetic, which con-stricts blood vessels, thus decreasing tissue perfusion and prolonging the local anesthetic effect. It does not take much epinephrine. Solutions of as little as 1 to 800 000 have been found to do the trick. However, frequently we add epinephrine (adrenaline) in a concentration of 1 to 200 000 so that if we inject into the blood stream (rather than around the nerve), the patient will get a little tachycardia, alert-ing us to stop the injection immediately. Greater epinephrine concentrations will not further prolong the local anesthetic effect, but will cause more tachycardia (experienced by patients as “butterflies in the stomach,” headache, and appre-hension). The drugs are metabolized according to their structure: the esters fall prey to plasma cholinesterase and undergo hydrolysis. Microsomal enzymes in the liver go to work on the amides. Occasionally, the products of biotransforma-tion of local anesthetics cause mischief, for example some patients are allergic to para-aminobenzoic acid, which forms during ester hydrolysis. Methemoglobin-emia (and reduced oxygen carrying capacity) has been observed after the use of prilocaine (Citanest®) and benzocaine, the latter a topical anesthetic (with a sad history of causing contact dermatitis) found in some sprays.

Lidocaine has seen widespread use as an antiarrhythmic drug. Its mechanism of action as a local anesthetic also works on the heart muscle where it can block sodium channels. This can explain its effect on phase IV depolarization, and thus decreased excitability and automaticity. The therapeutic effect of small intra-venous doses of lidocaine (1 mg/kg as a bolus or 40 mcg/kg/min as an infusion – up or down titrated to effect) alert us to the fact that local anesthetics do have cardiac effects, not all of which are welcomed. Dangerous cardiac toxicity (hypotension, A–V block, ventricular fibrillation) has been triggered by bupivacaine mistakenly injected intravenously. All local anesthetics can have such cardiac toxicity; how-ever, it is a particular problem with bupivacaine as its duration of binding with sodium receptors is much longer than that of other agents. Importantly, victims of bupivacaine-induced cardiac toxicity have survived after prolonged resuscitation.

Local anesthetics will also affect the central nervous system when injected intravenously or when a large peripheral dose is rapidly absorbed. Thus, both procaine and lidocaine have been used as intravenous anesthetics. However, their margin of safety is too narrow to recommend their routine use. With overdose, convulsions are common. As many as 4 out of 1000 patients might exhibit some CNS excitation during a regional local anesthetic. Typically, the patients complain of numbness around mouth and tongue, dizziness, tingling, and tinnitus, and they often become restless before seizing. We treat seizures with manual ventilation with oxygen and a small intravenous dose of, for example, thiopental (20 to 50 mg bolus for the average adult) or midazolam (1 mg bolus).

We have a large selection of local anesthetics available. The drugs differ primar-ily in their duration of action. Depending on dose and concentration, we have at our disposal everything from the long-acting tetracaine (Pontocaine®), bupiva-caine (Marcaine®) and etidocaine (Duranest®), to the short-acting chloropro-caine (Citanest®) and procaine (Novocain®). Lidocaine and mepivacaine fit into the intermediate category.

As mentioned above, we add bicarbonate to those drugs prepared at a particularly acidic pH (lidocaine, chloroprocaine) to speed onset of anesthesia (it also reduces burning when making a skin wheal).

blocks (by an unknown mechanism); and (iv) as a marker for intravascular injec-tion. Because of epinephrine instability in an alkaline environment, commercial local anesthetic preparations containing epinephrine are highly acidic. We can add bicarbonate, and/or use plain local anesthetics to which we add epinephrine ourselves. Remember that 1:200 000 epinephrine is only 5 mcg/mL – use a tuber-culin syringe and measure carefully! Important note: because we fear necrosis of the tip we do not add epinephrine to blocks placed at an “end organ,” e.g., digits, penis, nose, ears.

Through unclear mechanisms, small doses of clonidine enhance and prolong regional anesthesia. One mcg/kg added to the local anesthetic for a Bier block appears to delay the onset of tourniquet pain. In epidural and spinal anesthesia, 50 to 75 mcg clonidine has been found to augment the effect of both local anesthetics and opioids.

We add opioids to neuraxial anesthetics to prolong the analgesic effect. Man-ageable side effects include itching, nausea, and vomiting. Respiratory depres-sion, though less common, concerns us greatly, and we usually employ pulse oximetry on the post-surgical ward. Neuraxial morphine carries a risk of delayed respiratory depression, so we continue to monitor about 24 hours after the last dose.