Electromagnetic waves ranging in frequencies between 3 kHz and 1 GHz are normally called radio waves; waves ranging in frequencies between 1 and 300 GHz are called microwaves. Radio waves, for the most part, are omnidirectional. When an antenna transmits radio waves, they are propagated in all directions. Radio waves, particularly those waves that propagate in the sky mode, can travel long distances. This makes radio waves a good candidate for long-distance broadcasting such as AM radio.

Radio waves are used for multicast communications, such as radio and television, and paging systems.

Radio waves use omnidirectional antennas that send out signals in all directions. 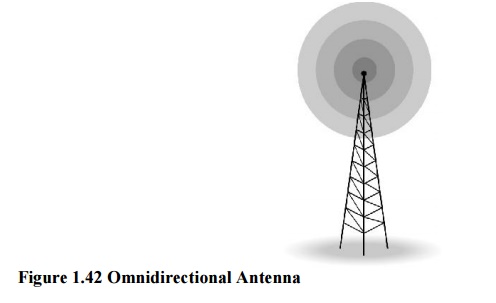 The omnidirectional characteristics of radio waves make them useful for multicasting, in which there is one sender but many receivers. AM and FM radio, television, maritime radio, cordless phones, and paging are examples of multicasting.

Electromagnetic  waves  having  frequencies  between  I  and  300  GHz  are  called Microwaves. Microwaves are unidirectional. When an antenna transmits microwave waves, they can be narrowly focused. This means that the sending and receiving antennas need to be aligned. The unidirectional property has an obvious advantage. A pair of antennas can be aligned without interfering with another pair of aligned antennas

Microwaves are used for unicast communication such as cellular telephones, satellite networks, and wireless LANs.

Microwaves need unidirectional antennas that send out signals in one direction. Two types of antennas are used for microwave communications: the parabolic dish and the hom.

A parabolic dish antenna is based on the geometry of a parabola: Every line parallel to the line of symmetry (line of sight) reflects off the curve at angles such that all the lines intersect in a common point called the focus. The parabolic dish works as a funnel, catching a wide range of waves and directing them to a common point. In this way, more of the signal is recovered than would be possible with a single-point receiver.

Microwaves, due to their unidirectional properties, are very useful when unicast (one-to-one) communication is needed between the sender and the receiver. They are used in cellular phones, satellite networks and wireless LANs.

Infrared waves, with frequencies from 300 GHz to 400 THz (wavelengths from 1 mm to 770 nm), can be used for short-range communication. Infrared waves, having high frequencies, cannot penetrate walls. This advantageous characteristic prevents interference between one system and another; a short-range communication system in one room cannot be affected by another system in the next room.

Infrared signals can be used for short-range communication in a closed area using line-of-sight propagation.

The infrared band, almost 400 THz, has an excellent potential for data transmission. Such a wide bandwidth can be used to transmit digital data with a very high data rate. The Infrared Data Association (IrDA), an association for sponsoring the use of infrared waves, has established standards for using these signals for communication between devices such as keyboards, mice, PCs, and printers. For example, some manufacturers provide a special port called the IrDA port that allows a wireless keyboard to communicate with a PC.