Guided media, which are those that provide a conduit from one device to another, include twisted-pair cable, coaxial cable, and fiber-optic cable. A signal traveling along any of these media is directed and contained by the physical limits of the medium. Twisted-pair and coaxial cable use metallic (copper) conductors that accept and transport signals in the form of electric current. Optical fiber is a cable that accepts and transports signals in the form of light.

A twisted pair consists of two conductors (normally copper), each with its own plastic insulation, twisted together.

One of the wires is used to carry signals to the receiver, and the other is used only as a ground reference.

The most common UTP connector is RJ45 (RJ stands for registered jack), as shown in Figure 1.36. The RJ45 is a keyed connector, meaning the connector can be inserted in only one way.

Coaxial cable (or coax) carries signals of higher frequency ranges than those in twisted pair cable. It has a central core conductor of solid or stranded wire (usually copper) enclosed in an insulating sheath, which is, in turn, encased in an outer conductor of metal foil, braid, or a combination of the two. The outer conductor is also enclosed in an insulating sheath, and the whole cable is protected by a plastic cover (see Figure 1.31).

Coaxial cables are categorized by their radio government (RG) ratings. Each RG number denotes a unique set of physical specifications, including the wire gauge of the inner conductor, the thickness and type of the inner insulator, the construction of the shield, and the size and type of the outer casing. Each cable defined by an RG rating is adapted for a specialized function. 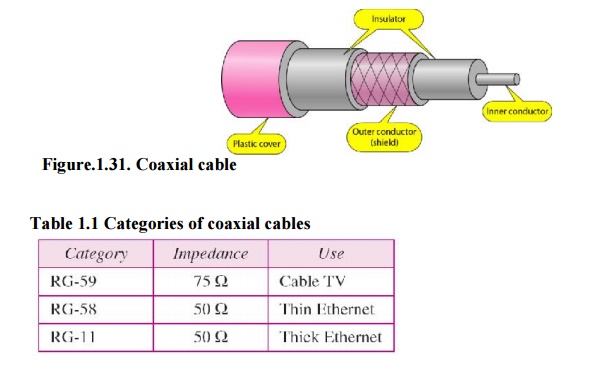 ·           Coaxial cable was widely used for both analog and digital data transmission.

Optical fibers use reflection to guide light through a channel. A glass or plastic core is surrounded by a cladding of less dense glass or plastic. The difference in density of the two materials must be such that a beam of light moving through the core is reflected off the cladding instead of being refracted into it. See Figure 1.34

Multimode beams from a light source move through the core in different paths. How these beams move within the cable depends on the structure of the core.

In multimode step-index fiber, the density of the core remains constant from the center to the edges. A beam of light moves through this constant density in a straight line until it reaches the interface of the core and the cladding. At the interface, there is an abrupt change due to a lower density; this alters the angle of the beam's motion. The term step index refers to the suddenness of this change, which contributes to the distortion of the signal as it passes through the fiber.

A second type of fiber, called multimode graded-index fiber, decreases this distortion of the signal through the cable. The word index here refers to the index of refraction. A graded-index fiber, therefore, is one with varying densities. Density is highest at the center of the core and decreases gradually to its lowest at the edge. Figure 1.36 shows the impact of this variable density on the propagation of light beams.

Single-mode uses step-index fiber and a highly focused source of light that limits beams to a small range of angles, all close to the horizontal. The single mode fiber is manufactured with a much smaller diameter. The decrease in density results in a critical angle that is close enough to 90° to make the propagation of beams almost horizontal. In this case, propagation of different beams is almost identical, and delays are negligible. 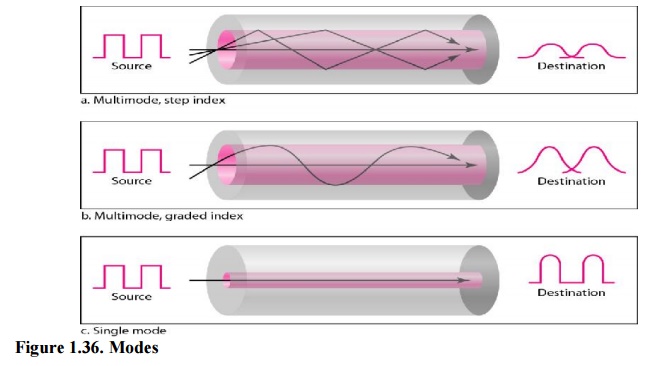 Note that the last size listed is for single-mode only.

The outer jacket is made of either PVC or Teflon. Inside the jacket are Kevlar strands to strengthen the cable. Kevlar is a strong material used in the fabrication of bulletproof vests. Below the Kevlar is another plastic coating to cushion the fiber. The fiber is at the center of the cable, and it consists of cladding and core.

There are three types of connectors for fiber-optic cables.

Fiber-optic cable is often found in backbone networks because its wide bandwidth is cost-effective. Today, with wavelength-division multiplexing (WDM), we can transfer data at a rate of 1600 Gbps.

Some cable TV companies use a combination of optical fiber and coaxial cable, thus creating a hybrid network. Optical fiber provides the backbone structure while coaxial cable provides the connection to the user premises. This is a cost-effective configuration since the narrow bandwidth requirement at the user end does not justify the use of optical fiber. Local-area networks such as 100Base-FX network (Fast Ethernet) and 1000Base-X also use fiber-optic cable.

There are some disadvantages in the use of optical fiber.