Established in 1947, the International Standards Organization (ISO) is a multinational body dedicated to worldwide agreement on international standards.

Established in 1947, the International Standards Organization (ISO) is a multinational body dedicated to worldwide agreement on international standards. An ISO standard that covers all aspects of network communications is the Open Systems Interconnection model. It was first introduced in the late 1970s.

An open system is a set of protocols that allows any two different systems to communicate regardless of their underlying architecture. The purpose of the OSI model is to show how to facilitate communication between different systems without requiring changes to the logic of the underlying hardware and software. The OSI model is not a protocol; it is a model for understanding and designing a network architecture that is flexible, robust, and interoperable.

ISO is the organization. OSI is the model.

The OSI model is a layered framework for the design of network systems that allows communication between all types of computer systems. It consists of seven separate but related layers, each of which defines a part of the process of moving information across a network (see Figure 1.13). 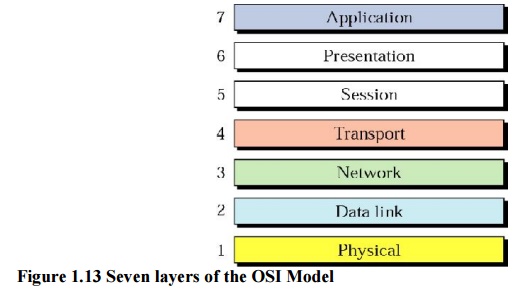 Figure 1.14 shows the layers involved when a message is sent from device A to device B. As the message travels from A to B, it may pass through many intermediate nodes. These intermediate nodes usually involve only the first three layers of the OSI Model.

Each layer defines a family of functions distinct from those of the other layers. By defining and localizing functionality in this fashion, the designers created an architecture that is both comprehensive and flexible.

At the physical layer, communication is direct: In Figure 1.14, device A sends a stream of bits to device B (through intermediate nodes). At the higher layers, however, communication must move down through the layers on device A, over to device B, and then back up through the layers. Each layer in the sending device adds its own information to the message it receives from the layer just above it and passes the whole package to the layer just below it. 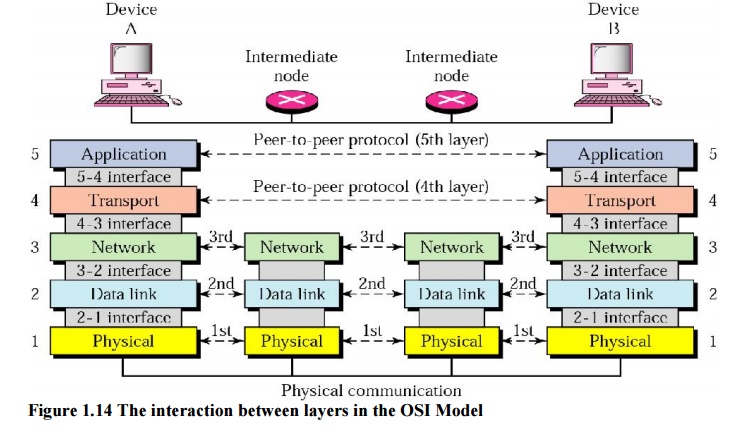 4. Organization of the layers:

The seven layers can be thought of as belonging to three subgroups. Layers I, 2, and 3-physical, data link, and network-are the network support layers; they deal with the physical aspects of moving data from one device to another. Layers 5, 6, and 7-session, presentation, and application-can be thought of as the user support layers; they allow interoperability among unrelated software systems. Layer 4, the transport layer ensures that what the lower layers have transmitted is in a form that the upper layers can use. The upper OSI layers are almost always implemented in software; lower layers are a combination of hardware and software, except for the physical layer, which is mostly hardware.

In Figure 1.15, which gives an overall view of the OSI layers, D7 means the data unit at layer 7, D6 means the data unit at layer 6, and so on. The process starts at layer 7 (the application layer), then moves from layer to layer in descending, sequential order. At each layer, a header, or possibly a trailer, can be added to the data unit. Commonly, the trailer is added only at layer 2. When the formatted data unit passes through the physical layer (layer 1), it is changed into an electromagnetic signal and transported along a physical link. 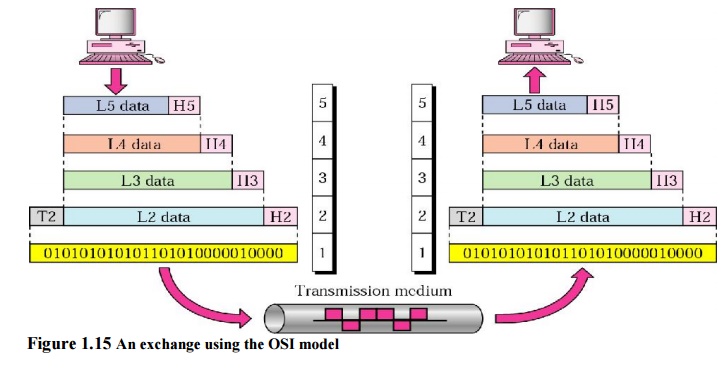