In data communications, we need to send messages from one end system to another. If the message is going to pass through a packet-switched network, it needs to be divided into packets of fixed or variable size.

In data communications, we need to send messages from one end system to another. If the message is going to pass through a packet-switched network, it needs to be divided into packets of fixed or variable size. The size of the packet is determined by the network and the governing protocol.

In a packet-switched network, there is no resource reservation; resources are allocated on demand.

In a datagram network, each packet is treated independently of all others. Even if a packet is part of a multipacket transmission, the network treats it as though it existed alone. Packets in this approach are referred to as datagrams. Datagram switching is normally done at the network layer. Figure 1.48 shows how the datagram approach is used to deliver four packets from station A to station X.

In this type of network, each switch (or packet switch) has a routing table which is based on the destination address. The routing tables are dynamic and are updated periodically. The destination addresses and the corresponding forwarding output ports are recorded in the tables. This is different from the table of a circuit switched network in which each entry is created when the setup phase is completed and deleted when the teardown phase is over. Figure 8.8 shows the routing table for a switch. 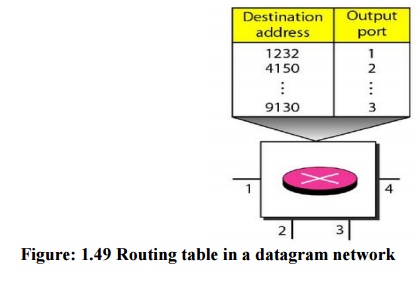 A switch in a datagram network uses a routing table that is based on the destination address.

Every packet in a datagram network carries a header that contains, among other information, the destination address of the packet. When the switch receives the packet, this destination address is examined; the routing table is consulted to find the corresponding port through which the packet should be forwarded.

The destination address in the header of a packet in a datagram network remains the same during the entire journey of the packet.

Datagram Networks in the Internet:

The Internet has chosen the datagram approach to switching at the network layer. It uses the universal addresses defined in the network layer to route packets from the source to the destination.