A network is a set of devices (often referred to as nodes) connected by communication links. A node can be a computer, printer, or any other device capable of sending and/or receiving data generated by other nodes on the network.

A network is a set of devices (often referred to as nodes) connected by communication links. A node can be a computer, printer, or any other device capable of sending and/or receiving data generated by other nodes on the network.

Most networks use distributed processing, in which a task is divided among multiple computers. Instead of one single large machine being responsible for all aspects of process, separate computers (usually a personal computer or workstation) handle a subset.

A network must be able to meet a certain number of criteria. The most important of these are performance, reliability, and security.

a. Performance: Performance can be measured in many ways, including transit timeand response time.

Transit time is the amount of time required for a message to travel from one device to another. Response time is the elapsed time between an inquiry and a response.

The performance of a network depends on a number of factors, including the number of users, the type of transmission medium, the capabilities of the connected hardware, and the efficiency of the software.

b. Reliability: In addition to accuracy of delivery, network reliability is measured by thefrequency of failure, the time it takes a link to recover from a failure, and the network's robustness in a disaster.

Type of Connection: A network is two or more devices connected through links. A linkis a communications pathway that transfers data from one device to another.

There are two possible types of connections: point-to-point and multipoint.

a. Point-to-Point: A point-to-point connection provides a dedicated link between twodevices. The entire capacity of the link is reserved for transmission between those two devices (see Figure 1.3a).

b. Multipoint: A multipoint (also called multidrop) connection is one in which more thantwo specific devices share a single link (see Figure 1.3b). In a multipoint environment, the capacity of the channel is shared, either spatially or temporally. If several devices can use the link simultaneously, it is a spatially shared connection. If users must take turns, it is a timeshared connection.

The term physical topology refers to the way in which a network is laid out physically. Two or more devices connect to a link; two or more links form a topology. The topology of a network is the geometric representation of the relationship of all the links and linking devices (usually called nodes) to one another.

a. Mesh: In a mesh topology, every device has a dedicated point-to-point link to every otherdevice. A fully connected mesh network with n nodes has n(n -1) /2 physical channels.

To accommodate that many links, every device on the network must have n – 1 input/output (I/O) ports (see Figure 1.5) to be connected to the other n – 1 stations.

1.        The use of dedicated links guarantees that each connection can carry its own data load, thus eliminating the traffic problems that can occur when links must be shared by multiple devices.

2.        A mesh topology is robust. If one link becomes unusable, it does not incapacitate the entire system.

1.        Every device must be connected to every other device, installation and reconnection are difficult.

2.        The sheer bulk of the wiring can be greater than the available space (in walls, ceilings, or floors) can accommodate.

3.        The hardware required to connect each link (I/O ports and cable) can be prohibitively expensive.

b. Star Topology: In a star topology, each device has a dedicated point-to-point link only to acentral controller, usually called a hub. The devices are not directly linked to one another. Unlike a mesh topology, A star topology does not allow direct traffic between devices. The controller acts as an exchange: If one device wants to send data to another, it sends the data to the controller, which then relays the data to the other connected device (see Figure 1.6).

3.        Far less cabling needs to be housed, and additions, moves, and deletions involve only one connection: between that device and the hub.

4.        It includes Robustness. If one link fails, only that link is affected. All other links remain active.

1.        It is the dependency of the whole topology on one single point, the hub. If the hub goes down, the whole system is dead.

2.        A star requires far less cable than a mesh; each node must be linked to a central hub. For this reason, often more cabling is required in a star than in some other topologies (such as ring or bus).

c. Bus Topology: A bus topology is multipoint. One long cable acts as a backbone to link allthe devices in a network (see Figure 1.7). Nodes are connected to the bus cable by drop lines and taps.

A drop line is a connection running between the device and the main cable.

A tap is a connector that either splices into the main cable or punctures the sheathing of a cable to create a contact with the metallic core. As a signal travels along the backbone, some of its energy is transformed into heat. Therefore, it becomes weaker and weaker as it travels farther and farther. For this reason there is a limit on the number of taps a bus can support and on the distance between those taps.

3.        Signal reflection at top can degradation in quality.

Ethernet LANs can use a bus topology, but they are less popular now.

d. Ring Topology: In a ring topology, each device has a dedicated point-to-point connectionwith only the two devices on either side of it. A signal is passed along the ring in one direction, from device to device, until it reaches its destination. Each device in the ring incorporates a repeater. When a device receives a signal intended for another device, its repeater regenerates the bits and passes along them (see Figure 1.8).

Ring topologies are found in some office buildings or school campuses. Today high speed LANs made this topology less popular.

e. Hybrid Topology: A network can be hybrid. For example, we can have a main star topologywith each branch connecting several stations in a bus topology as shown in Figure 1.9. 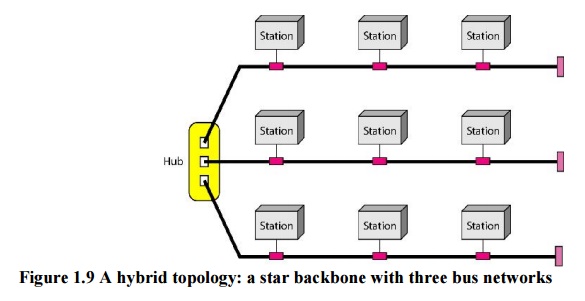 Computer networks are created by different entities. Standards are needed so that these heterogeneous networks can communicate with one another. The two best-known standards are the OSI model and the Internet model.

A LAN normally covers an area less than 2 Meters. A WAN can be worldwide.

Networks of a size in between are normally referred to as metropolitan area networks and span tens of miles.

A local area network (LAN) is usually privately owned and links the devices in a single office, building, or campus (see Figure 1.10). Depending on the needs of an organization and the type of technology used, a LAN can be as simple as two PCs and a printer in someone's home office; or it can extend throughout a company and include audio and video peripherals. Currently, LAN size is limited to a few kilometers

LANs are designed to allow resources to be shared between personal computers or workstations. The resources to be shared can include hardware (e.g., a printer), software (e.g., an application program) or data. LANs are distinguished from other types of networks by their transmission media and topology. In general, a given LAN will use only one type of transmission medium. The most common LAN topologies are bus, ring, and star. Early LANs had data rates in the 4 to 16 megabits per second (Mbps) range. Today, however, speeds are normally 100 or 1000 Mbps.

Wireless LANs are the newest evolution in LAN technology. 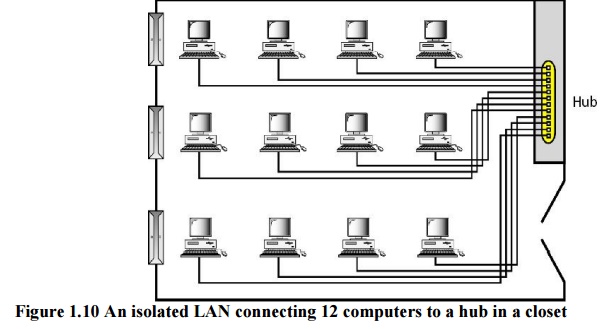 A wide area network (WAN) provides long-distance transmission of data, image, audio and video information over large geographic areas that may comprise a country, a continent or even the whole world. A WAN can be as complex as the backbones that connect the Internet or as simple as a dial-up line that connects a home computer to the Internet. We normally refer to the first as a switched WAN and to the second as a point-to-point WAN (Figure 1.11). 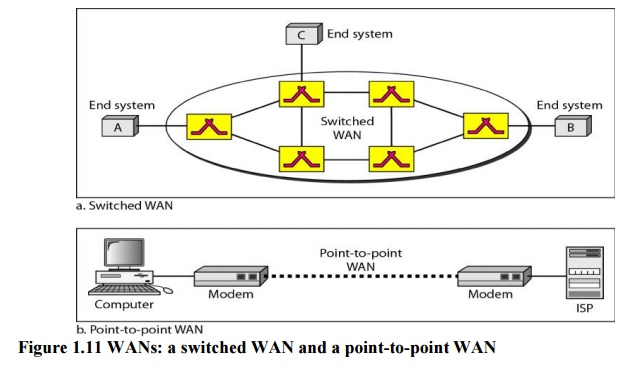 The switched WAN connects the end systems, which usually comprise a router (internetworking connecting device) that connects to another LAN or WAN. The point-to-point WAN is normally a line leased from a telephone or cable TV provider that connects a home computer or a small LAN to an Internet service provider (lSP). This type of WAN is often used to provide Internet access.

An early example of a switched WAN is X.25, a network designed to provide connectivity between end users. X.25 is being gradually replaced by a high-speed, more efficient network called Frame Relay. A good example of a switched WAN is the asynchronous transfer mode (ATM) network, which is a network with fixed-size data unit packets called cells. Another example of WANs is the wireless WAN that is becoming more and more popular.

WAN. It normally covers the area inside a town or a city. It is designed for customers who need a high-speed connectivity, normally to the Internet, and have endpoints spread over a city or part of city. A good example of a MAN is the part of the telephone company network that can provide a high-speed DSL line to the customer.

When two or more networks are connected, they become an internetwork, or internet. As an example, assume that an organization has two offices, one on the east coast and the other on the west coast. The established office on the west coast has a bus topology LAN; the newly opened office on the east coast has a star topology LAN. The president of the company lives somewhere in the middle and needs to have control over the company from her horne. 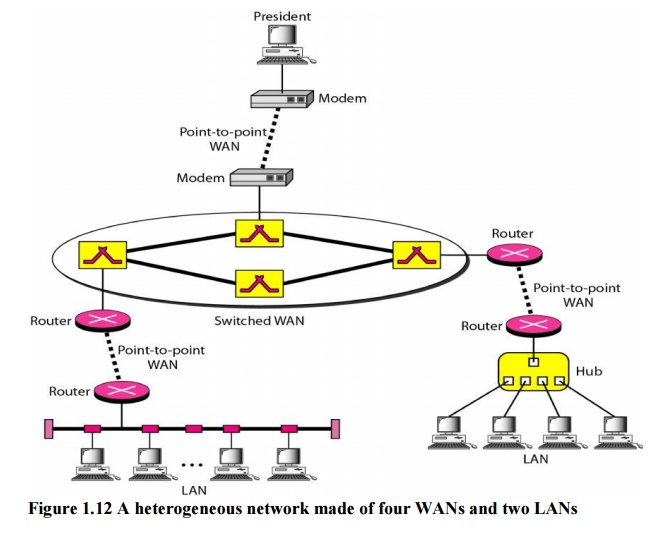 To create a backbone WAN for connecting these three entities (two LANs and the president's computer), a switched WAN (operated by a service provider such as a telecom company) has been leased. To connect the LANs to this switched WAN, however, three point-to-point WANs are required. These point-to-point WANs can be a high-speed DSL line offered by a telephone company or a cable modern line offered by a cable TV provider as shown in Figure 1.12.